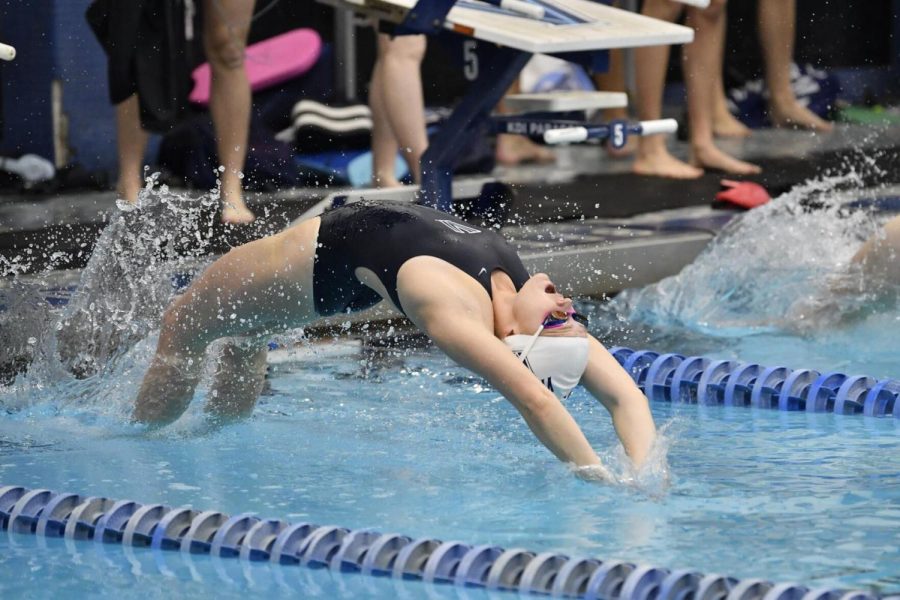 The Villanova swim and dive teams kicked off The Caritas Cup racing series on Oct. 24 with the I.M. Great session. After its season was postponed and may be cancelled due to COVID-19, the men’s and women’s swim teams were forced to get creative.

The Caritas Cup consists of five days of racing over four weekends. Nov. 7 will be the Mid-Distance Madness, followed by The Caritas Cup Sprintacular on Nov.14. The final competition will take place Nov. 20-21, when the final prizes will be awarded to the student-athletes.

The cup consists of five “caps,” which will be awarded across different categories.

After the first day of events, junior Kelly Montesi and freshman Richard Nolan led the Yellow Cap competition as overall points leaders. The duo also are the long events leaders, the Red Cap. Additionally, Nolan is the leader for the freshmen in the hunt for the White Cap title with women’s teammate Audrey Pastorek.

The Green Cap, or the short event, leaders are senior Rayann Jaryszak and sophomore Kevin Geist. Jaryszak is currently leading the Blue Cap competition with freshman Ethan Brown, with the closest times to NCAA qualifying times in their respective events.

For the women, Jaryszak and sophomore Kaitlin Gravell are also in the hunt for the overall points Yellow Cap.

It is not a shock that Montesi is on top of the leaderboard. Montesi is coming off a stellar sophomore season, with three individual conference titles and four team relays. In her first two years, Montesi received 11 Big East Championship titles, with five of them being individual titles.

Villanova’s women’s swim and dive team has dominated the Big East, sweeping the Big East Championships for the past seven years. With no secured date for competition in sight, the team must stay on top of its game in hopes of an eighth title.

Nolan is already making a name for himself on the men’s team. He finished the day with 17 points, followed closely by senior Mishko Prikasky and Giest, who have 15 points, respectively. The men’s team finished in fourth at the Big East Championship last year. With help from Nolan and other underclassmen, the team could take home a medal.

Sports teams around the world struggle to find fun ways to keep their competitive edge in the time of COVID-19, and Villanova’s swim and dive teams are executing this perfectly. Since both teams are unable to leave campus and race other collegiate teams, they created a highly competitive intersquad race.

The swim team has adhered to COVID-19 protocols by practicing in small groups (pods) as the University has recommended and has not let these conditions conflict with training.

With four days of racing left to compete for those top positions, each race will be something to watch out for.