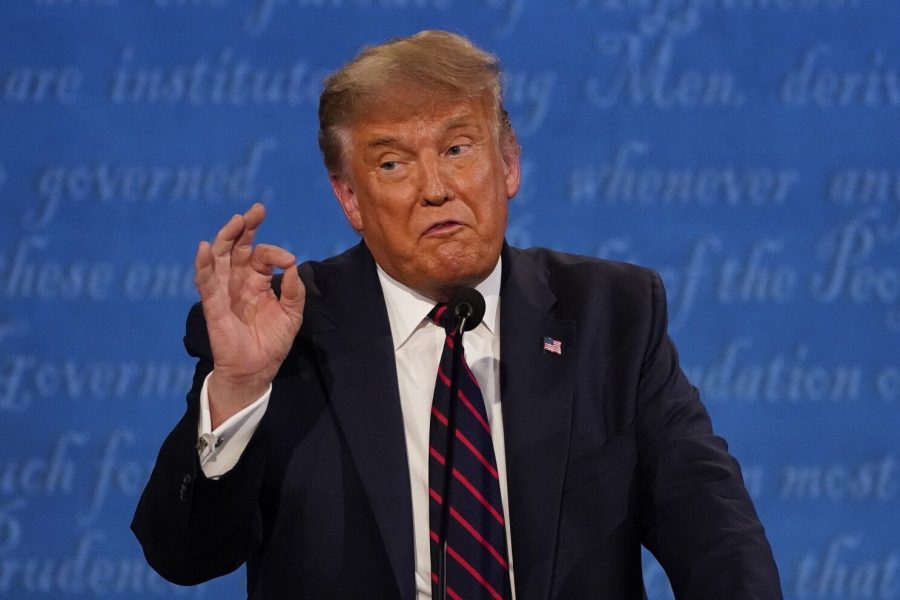 Courtesy of The Los Angeles Times

Chaos. That’s the first word that comes to mind when I think about the first presidential debate from last Tuesday.

Former Vice President Joe Biden and President Trump faced off head-to-head in a series of heated arguments that felt more like a ‘who can speak louder’ competition than a presidential debate.

Was I surprised that the debate was so chaotic? Absolutely not.

There were many defining moments throughout the debate, but none were as dramatic as when the moderator of the night, Chris Wallace, asked Trump “to condemn white supremacists and militia groups and to say that they need to stand down.”

It was a simple question –– probably the easiest one to answer all night.

Trump’s response to this question was, “Proud Boys, stand back and stand by!”

After hearing Trump say this, I felt angry, disgusted and fed up, but not surprised. I’d heard these racist remarks by Trump before, so why would debate night be any different?

How awful is it that our president, the leader of our country, is a white supremacist? How many more times does Trump need to do things like call white supremacists “very fine people,” or tweet, “When the looting starts, the shooting starts,” until his supporters give up in defending his racism?

I am absolutely appalled at his words, his mannerisms and his deep-rooted racism that existed even before he was elected into office in 2016.

Comments like these do more than deeply upset me. They enrage me. They worry me for our future. They make me wonder how he got elected in the first place. They are the types of comments that I never, ever, thought I would hear a president say.

We’ve seen his racism in the past, and one incident of many that stands out to me is his questioning of whether Barack Obama was born in the United States. When I heard this racist lie around the time that the 2016 election heated up, I was truly drawn back into the political world.

However, the origin of my interest in politics came from an earlier election. In first grade, I remember watching Barack Obama become the first African American president in the United States. As a class, our teacher had us watch the inauguration together. I’ll never forget sitting on the elementary school rug, watching with awe and hope and believing that people of all backgrounds could become president someday. I miss that America. It made me love where I lived and gave me inspiration to become more politically engaged.

Hearing Donald Trump continue to use racist terms like he did during the debate makes me question how we have done a complete 180 in the qualities that characterize a president. We quite literally went from an honest, caring and inclusive president to a racist, homophobic and misogynistic man who cares nothing about the American people and everything about himself.

I also hope that everyone reading this registers to vote, because your voice matters. Please, make your voice heard as soon as you can. Voting has already started. You can make a difference.