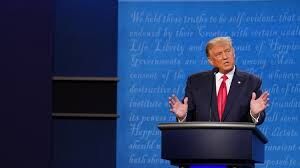 Courtesy of The New York Times

President Trump at the final debate.

With the change of the seasons and the approaching winter months, doctors are expressing their concerns regarding the pandemic. The United States has more cases and deaths than any other country in the world, but President Trump has made a claim that the pandemic is coming to an end here in America. Many Americans are unhappy with the president’s handling of the pandemic and blame the death toll and high percentage of cases on his refusal to acknowledge the severity of the virus, the importance of wearing masks and social distancing.

“Having people wear a mask is not something the public should struggle with,” Jenn Patron, a student in the College of Liberal Arts and Sciences at the University, said. “It doesn’t help seeing Trump downplaying this pandemic and not prioritize mask wearing himself.”

Although unhappy with the government’s handle on the virus, future healthcare professionals, like Mia Morales, a nursing student at the the University, are proud of other healthcare workers.

“Even though I do not appreciate people’s reactions to masks, I absolutely appreciate the effort and love from our doctors and nurses,” Morales said. “It makes me proud to be a nurse.”

Throughout the course of the pandemic, Trump has been quick to attack the nation’s top infectious disease specialists. The nation’s leading expert on the subject is Dr. Anthony Fauci, who has served the nation as Director of the National Institute of Allergy and Infectious Diseases since 1984. He has held this position through six presidencies and has worked through several of the country’s epidemics and health crises, becoming a leading figure throughout the coronavirus pandemic. However, Trump has clashed with Fauci since the pandemic first started in the U.S. in March.

While Trump has publicly denounced Fauci’s professional advice throughout the pandemic, Fauci has also not been hesitant to call out the president’s misleading comments regarding the virus. As cases continue to rise and Americans continue to die, Trump continues to attack professionals, like Fauci, for trying to advise him through this virus.

Last week, tensions between Trump and Fauci began to heat up once again.

Trump angrily responded to an interview Fauci gave on “60 Minutes” on Sunday night. Trump began to spew negative comments regarding Fauci. He insulted his age and insinuated that he is uneducated.

“People are tired of hearing Fauci and these idiots, all these idiots who got it wrong,” Trump said.

Fauci and the other leading doctors are attempting to protect the American people during this global health crisis, and Trump continues to attack them for it. America has been in a conflict of who to believe — doctors or the president.

“I trust the scientists and doctors far more than the president,” Patron said. “It’s a no brainer that these groups understand the virus way more than a politician would.”

“Fauci is a disaster. I mean, this guy, if I listened to him, we would have 500,000 deaths,” Trump said in the same comments about Fauci.

Fauci has encouraged mask wearing, social distancing and lockdowns in places that have become virus hotspots, so it is unclear how more deaths would be caused by listening to leading scientists.

According to The Hill, Fauci responded to Trump’s attacks by referencing the Godfather, saying, “Nothing personal, strictly business as far as I’m concerned. I just want to do my job and take care of the people of this country.”

Fauci went on to say he is not trying to make it seem as if he and Trump are against each other; he is doing his best to work with the president to handle this virus. Americans are questioning Trump’s attacks on Fauci and people who stress the danger of the virus, as Trump has just recently recovered from the virus himself.

“These attacks were ridiculous,” Morales said. “The president is not a doctor or a medical professional, so he has no place to call a doctor an idiot.”

Many believe since Trump just had the virus, he would be taking the pandemic more seriously, but his recovery from the virus seems to have inflamed his belief that the virus is not as serious as the doctors and experts make it seem. As the election and winter months approach, Trump and his leading infectious disease experts continue to battle on how to properly handle the coronavirus pandemic.