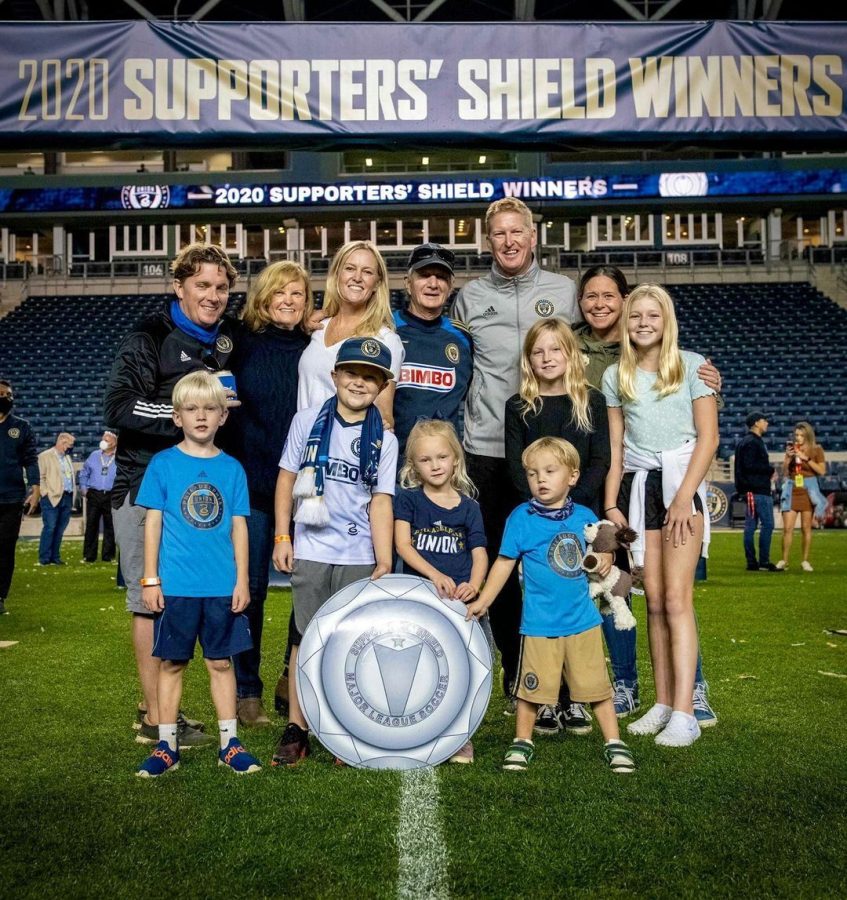 Curtin played 10 seasons in the MLS before becoming a head coach.

After years of disappointment and heartbreak at the final moment, Villanova’s own Jim Curtin has finally won a trophy as head coach of the Philadelphia Union, winning the 2020 Supporter’s Shield. The Union clinched the Shield with a 2-0 victory over the New England Revolution on Nov. 8.

This trophy, awarded to the team with the best regular season record in Major League Soccer, was not only the first for Curtin, but also the first in franchise history for the Union, which was founded in 2010.

Curtin is a Philadelphian through and through. Born in Oreland, Curtin went to high school at Bishop McDevitt. He was recruited and chose to play soccer for Villanova, starring on the team from 1997-2000. He was named Big East Rookie of the Year during his freshman season, Second Team All-Big East as a sophomore and earned First Team All-Big East honors during both his junior and senior seasons, despite the program’s overall struggles during his time with the Wildcats.

He became the first Villanova graduate to be drafted into the MLS in 2000, selected in the third round by the Chicago Fire. Curtin was an anchor in defense for eight seasons for the Fire and for two seasons with Chivas USA, retiring in 2010 to become a coach in the academy for the newly announced Union.

In 2014, Curtin was promoted to head coach after a successful stint on an interim basis. He immediately put the team in a position for its first trophy in franchise history, reaching the final of the US Open Cup. However, the Union lost 3-1 in extra time to the Seattle Sounders, beginning a pattern of falling short.

In 2015, Curtin again led the team to the final of the U.S. Open Cup, but after drawing 1-1 in normal time, the Union lost to Sporting Kansas City, 7-6, on penalty kicks.

2018 brought yet another appearance in the finals, this time against the Houston Dynamo. Once again, the Union came up short, losing 3-0 in a game they trailed from the beginning.

Curtin had been at the helm for several solid, albeit unspectacular seasons, until the 2020 campaign. After struggling in the preseason, the Union clicked and played excellently in the MLS is Back Tournament, held in a bubble at the ESPN Wide World of Sports Complex in Orlando. The Union made a run to the semifinals of the tournament, only losing to the eventual champions, the Portland Timbers.

After the conclusion of the tournament, the team continued its torrid form, winning all but three games during the rest of the season. The biggest key to its success was a 9-0-0 record at the home field of Subaru Park in Chester, including a 5-0 win in late October against Toronto FC, the biggest competition for the Supporters Shield.

The Union was the first team in MLS history to finish with a perfect record at home.

With Curtin’s Philadelphia background and multiple heartbreaks, this long awaited trophy meant so much more. Curtin took out a full page ad in the Philadelphia Inquirer to thank the fans and show his appreciation to the city.

“Coaching a Philadelphia team is special to me, nothing else will ever give me the same thrill,” he said. “From the moment I joined the Philadelphia Union, all I wanted to do was bring a trophy to this city. But I wanted to do it in a way Philly would appreciate, through hard work, grit, determination, and an us-against-the-world mentality.

“The Union have come so close to silverware three times before this, and when we didn’t get the result we needed, it was our supporters and fans that picked us up and gave us the fire to fight on,” Curtin continued. “And now we did it. We did it for the fans all the people like me that love Philly teams in a special way no other city can match.”

The Union now begin their quest for the biggest trophy, the MLS Cup, as the top seed in the Eastern Conference. Its playoff run kicks off next Tuesday at Subaru Park against the winner of Inter Miami and Nashville.