Donald Trump’s Actions After the Election Were Troubling 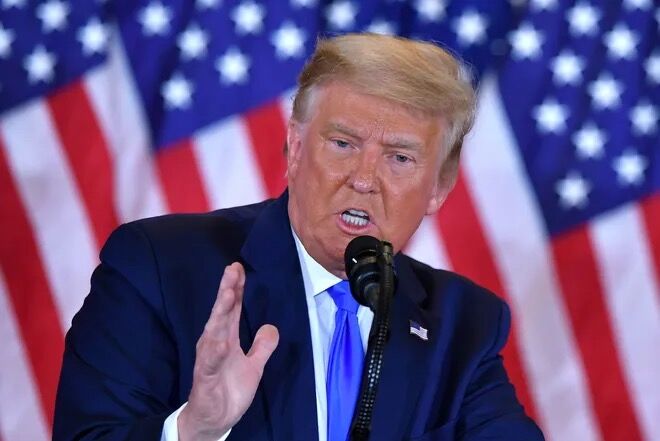 President Trump delivered a speech after the election was over questioning the results.

During the election, I know many people were glued to their phones, refreshing constantly to see any new updates. I was mainly on Twitter, trying to see the opinions of the people that I follow, along with the insights of various politicians involved in the race.

Something I found odd was the quietness of the usually very vocal incumbent President Donald Trump, and as I looked on his page, it was very apparent why this was the case. Twitter took to censoring the various baseless, exaggerated and misleading claims tweeted by Trump while the election was taking place, especially during the times where certain states were flipped Democrat. In addition, his claims to “stop the count” and various other things he advocated for are extremely troubling, coming from someone who has held the presidency for the past four years.

One of the biggest things many noticed was the attack on mail-in votes from Trump and his supporters. Because of the large influx of mail-in votes in favor of Democratic candidate Joe Biden, Trump immediately took to Twitter to denounce them as voter fraud. In reality, the large disparity of these was due to the constant criticism Trump has had towards mail-in votes leading up to the election, urging his supporters to vote in-person.

As a result of this, Trump started to constantly tweet the phrase “STOP THE COUNT!”, following it up with many claims on voter fraud that were promptly censored by Twitter. The problem with these claims is that they are unsubstantiated and made without consideration for the logic of the situation. Rather, they stem from emotion and the fact that Trump started to lose the election.

In addition, the incumbent only wanted to stop the count in states that were flipping Democratic, like Wisconsin, Michigan, Pennsylvania and Georgia, while wanting the states where he could still win, such as Nevada and Arizona, to count every vote. This hypocrisy and lack of regard for simple democracy should not be showcased by someone who was the president for the last four years.

This is extremely dangerous for someone in such an influential position as Trump to make these claims, as his supporters will share the same wrong notion. This is made clear when in Detroit, many Trump supporters “tried to storm their way into a Detroit convention center where ballots” were processed in order to carry out the wishes of their candidate to “stop the count,” according to The Independent. Again, this is a huge disregard for the democracy of the nation and a very childish way to handle loss.

This is just one of the many examples of things Trump has tweeted over the past few days. One of the most notable was when he stated that he claimed Pennsylvania, Georgia, North Carolina and Michigan for “Electoral Vote purposes” because he had a lead in them at the time. These were promptly censored by Twitter as they can mislead, along with just making no sense, since all of the ballots were not counted yet.

What is even more troubling is the constant threats Trump made to take cases to the Supreme Court and the actual lawsuits filed against “all of the recent Biden claimed States,” as he stated Twitter. He is doing this without any evidence of fraud and as a result, “none of the dozen or so lawsuits they had brought in battleground states appeared to be gaining any traction in the courts,” as reported by The New York Times.

The whole situation is just so bizarre that someone in his position would go to huge extents for something so unreasonable.

The example of Trump should resonate in the minds of many to be careful of who we choose as our nominees for the presidency. Despite whatever political position or party one affiliates with, Trump’s handling of loss goes against the values of American democracy, in which he advocates to stop the count of votes in order to win the states he is leading but to continue counting the votes in the states that he is losing. In his position, the best course of action was to accept the loss gracefully and abide by the logic at hand, instead of doubling down on all of his claims based on no evidence at all.

Moving forward, this election has shown that our vote ultimately matters greatly, as the highest voter turnout of all time was just seen. It is our responsibility as voters to assess each candidate and make educated decisions on who to vote for in order to avoid cases like Trump.