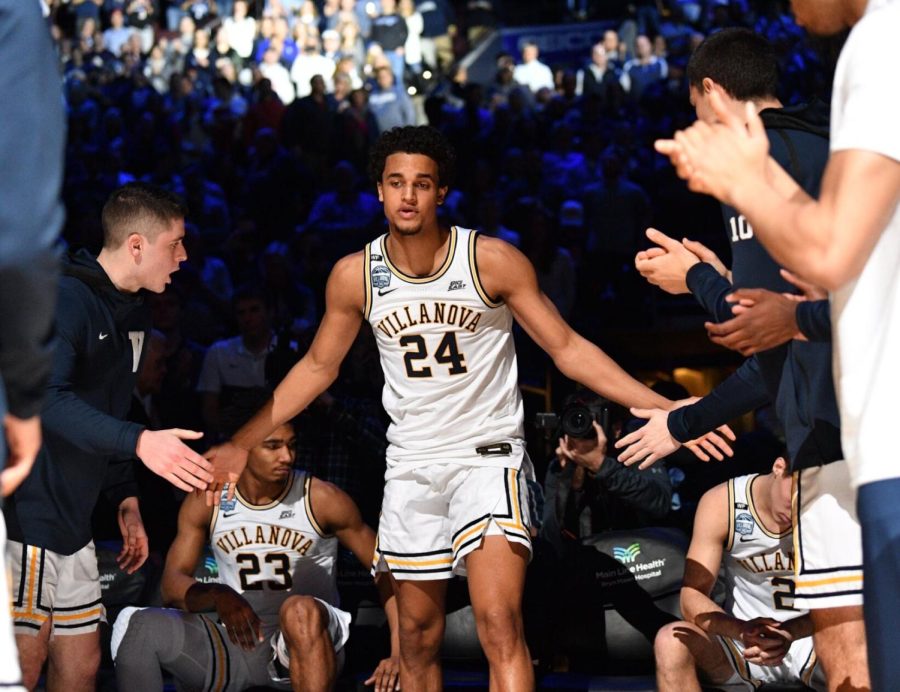 Robinson-Earl is expected to have a solid 2020-21 season.

As part of the Big East Conference’s Media Day, Villanova’s Collin Gillespie and Jeremiah Robinson-Earl were selected to the preseason All-Big East First Team. The Wildcats were also chosen as preseason favorites to win the Big East, with nine of 10 possible first place votes in the Coaches Poll (coaches were not permitted to vote for their own teams).

The First and Second Teams were voted on by the conference’s 11 head coaches, who could not vote for their own players. Coaches chose 11 players, with five on the first team and six on the second, due to a voting tie.

Gillespie was one of two unanimous first team selections, along with Seton Hall’s Sandro Mamukelashvili. Gillespie, a 6’3” senior guard, hopes for big things this season after averaging 15.1 points per game during his junior campaign. He led the Wildcats in minutes, assists and steals and was a key contributor to a team finishing with a share of the regular season Big East title.

Last season’s Freshman of the Year, Robinson-Earl, was also named to the First Team after averaging 10.5 points per game last season. The forward from Kansas City led the team in rebounds and added nine double doubles.

Villanova guard Justin Moore was chosen as one of six preseason all-Second Team selections. The 6’4” sophomore was part of the all-Big East freshman team at the conclusion of last season, averaging 11.2 points per game and shooting at nearly 40% from the three point range.

Creighton guard Marcus Zegarowski was named 2020-21 all-Big East Preseason Player of the Year after leading the Bluejays to a share of the Big East title, their first since conference realignment in 2013. Zegarowski is the conference’s leading returning scorer, after three seniors graduated and two juniors declared early for the NBA Draft. He was third in the league in three point percentage and assists last year.

Seton Hall’s Mamukelashvili was the other unanimous pick for the First Team. The 6’11” senior from Tbilisi, Georgia led the Pirates to a share of the regular season title by averaging 11.9 points per game and shooting 43.4% from beyond the arc.

Rounding out the First Team is Providence’s David Duke, a junior guard expected to do big things as the first option in the Friar offense. Duke averaged 12 points per game last season, winning the team’s Most Improved Award after averaging seven as a freshman, and is poised to make another leap after last season’s top dog, Alpha Diallo, graduated.

In the Coaches Poll, Villanova received 99 points of a possible 100, with nine picks to win the conference and second on a single ballot. Creighton received the two remaining first place votes and seven of eight possible runner up slots to be placed second, its highest preseason ranking since rejoining the Big East before the 2013-14 season.

Providence was picked to finish third after it ended the 2019-20 season on a six game winning streak, finishing one game out of first place with its highest Big East win total in league history.

Newcomer Connecticut was placed fourth in the poll, rejoining the Big East after seven years in the American Athletic Conference.

Seton Hall was barely behind UConn in the poll, with 67 points to Connecticut’s 69. The Pirates finished last season tied for first with Villanova and Marquette, but lost Big East Player of the Year Myles Powell.

Sixth is Marquette, in its first year without NCAA top scorer Markus Howard, followed closely by Xavier in seventh. Butler and St. Johns were in eighth and ninth, respectively, with 37 and 34 points apiece.

The season tips off nationwide on Nov. 25.