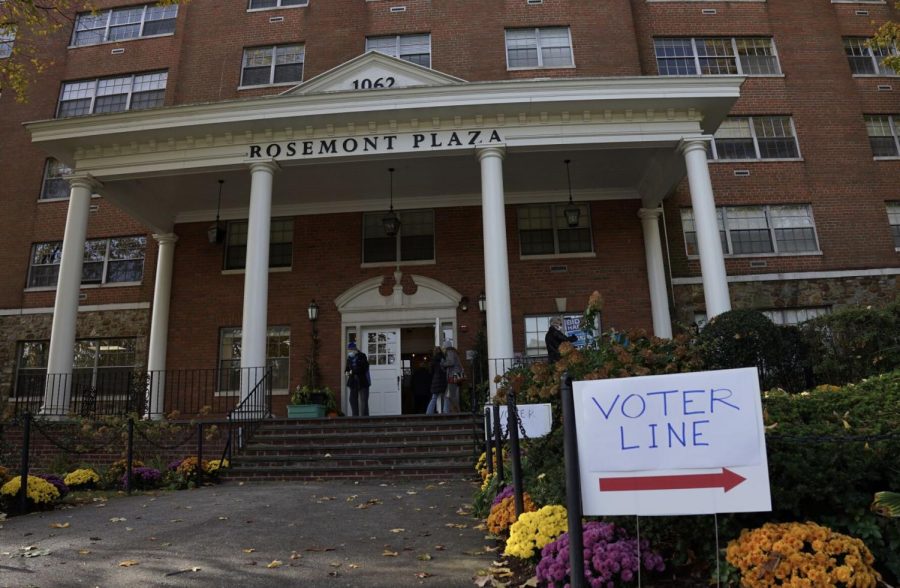 Although many voters mailed in ballots, many chose to vote in-person on Election Day.

In the weeks leading up to Tuesday, Nov. 3, at least 100 million early votes were cast by Americans across the country and around the world, but as Americans woke up on Nov.4, the presidential election remained too close to call.

President Donald Trump secured the swing states of Ohio, Iowa and Florida, according to The Associated Press.

Tallying the states that were called as of 1:00 a.m., former Vice President holds 223 electoral votes, while Trump has 212, with 103 electoral votes yet to be called. A candidate needs 270 votes to secure the presidency.

All eyes are on Pennsylvania, as a key battleground state, as President Donald Trump and former Vice President Joe Biden remain neck and neck, while the state continued to count votes throughout Tuesday night and throughout Wednesday. With 20 electoral votes, Pennsylvania will be a key decider in this election. Trump flipped the state and won by less than 1 percent in 2016.

According to CBS News, this was the first presidential election that Pennsylvania voters were able to vote via mail-in ballots without needing an excuse for doing so. Widespread fear regarding the COVID-19 pandemic and the potential spread of the virus at polling locations, made mail-in ballots a popular option for voters in the state’s June primary election.

Key swing states, including Wisconsin, Michigan, North Carolina and Arizona, remained too close or too early to call.

Local officials in Detroit, Philadelphia and Milwaukee warned the public that vote counting would stretch well into Wednesday.

Democratic stronghold counties in the Atlanta area and surrounding suburbs were still counting ballots in the early hours of Wednesday morning. Fulton County, the state’s most populated county and reliably Democrat, was still counting absentee ballots as of 12:30 a.m.

“At this point, I don’t have info regarding a time things will stop,” Fulton County spokeswoman Regina Waller said. “It appears we will be here for awhile.

By 1:00 a.m. on Wednesday, Fulton County reported 95 percent of its results.

Biden delivered brief remarks in the early hours of Nov. 4, at a drive-in event in Wilmington. He was joined on stage by his wife, Dr. Jill Biden.

“We knew this was going to go long,” he said to the crowd. “We feel good about where we are. We really do.”

Biden acknowledged the race would continue at least into Wednesday morning.

The former vice president said that he and his team felt confident about winning Arizona, Michigan, Wisconsin and Pennsylvania.

Biden also touched on the progress of his campaign in Georgia.

“We’re still in the game in Georgia,” the Democratic presidential nominee said, “even though we weren’t expecting that.”

He then expressed his positivity.

“I’m here to tell you tonight, we believe we’re on track to win this election,” Biden said. “I’m optimistic about this outcome.”

Biden thanked supporters for turning out to vote and waiting for him outside of the Chase Center, where he spoke at 12:50 a.m.

Minutes before Biden took the stage to address a crowd of enthusiastic supporters, Trump took to Twitter.

“We are up BIG, but they are trying to STEAL the Election,” Trump tweeted at 12:49 a.m. “We will never let them do it. Votes cannot be cast after the Polls are closed.”

“It’s not my place or Donald Trump’s place to declare the winner of this election,” Biden tweeted. “It’s the voters’ place.”

On Tuesday morning, during an interview on “Fox & Friends,” Trump said he would declare victory “when there’s a victory” and that “there’s no reason to play games.”

He was expected to also make remarks on Wednesday morning, shortly after Biden, but as of 1:50 a.m., he had not spoken publicly, except via Twitter.

On campus, students reflected this same unease of who would win. Most students stayed up late, following results as they came in. Others, reportedly in The Commons, were found to be making comments on a future of no more masks, the pandemic being “over” and Trump clinching a victory, although nothing was final at the time.

With the nation on edge, the final result may not be known for days, as postal votes continue to be tallied. As more than 100 million cast ballots early, the United States is on course for its highest voter turnout in a century, which also caused delays in results.

While the University community primarily focused on the presidential race, control of Congress is also at stake for the current Republican majority in the Senate.

So far, Republicans lost a Senate seat in Colorado, but they gained one in Alabama. Mitch McConnel, Republican Senate leader, and Lindsey Graham have both been re-elected.

The House of Representatives is expected to stay in Democratic hands.

This election particularly showed a trend toward early voting and showed how mail-in voting could reshape the election. Ballot counting varies by state, but in states where votes could not begin to be counted until Election Day, the abundance of mail-in votes contributed to a delay in final results.