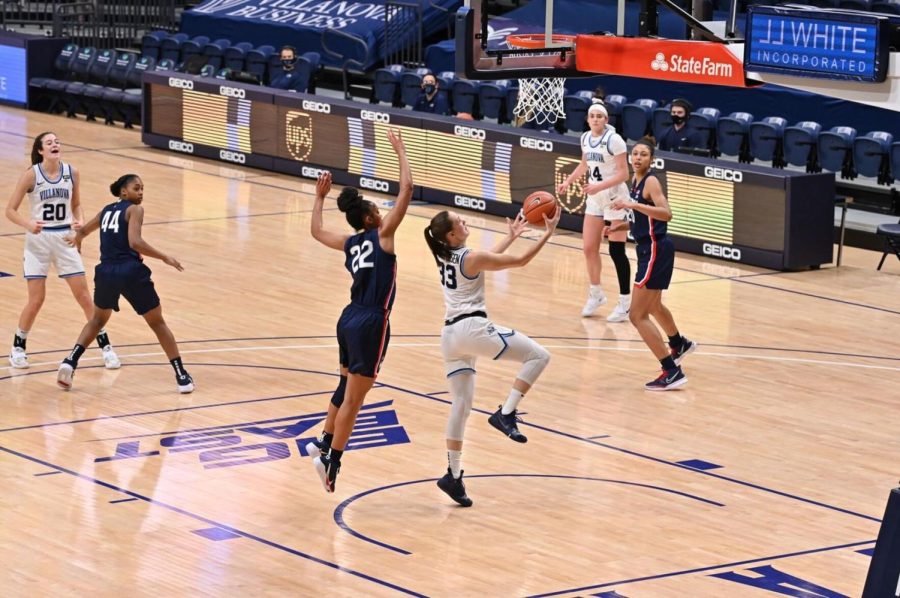 On Wednesday evening, the Wildcats suffered their first loss of the season to No. 3 ranked UConn to fall to 7-1 on the season. The Huskies beat the Wildcats 90-52 in the two teams first matchup in eight years as UConn has rejoined the Big East this season.

The ‘Cats started out strong holding a 10-8 lead midway through the first quarter. The Huskies fought back and led by six points heading into the second.

Villanova was able to cut the lead to one with 6 minutes left in the half behind a strong performance from sophomore Maddy Siegrist. Despite the strong effort put forth by the ‘Cats, the athleticism and defense of the Huskies led by 13 at the half.

The Wildcats struggled to get their offense going in the third quarter and by the 6:00 mark, the Huskies led by 20 points. An impressive performance from the nation’s No. 1 recruit and Big East freshman of the week, Paige Bueckers, helped propel UConn to a 24 point lead going into the final quarter.

The ‘Cats got their offensive rhythm back, making six of their eleven threes in the fourth quarter, but they could not make the necessary defensive adjustments to slow down the Huskies.

Wednesday night’s matchup was the last for the ‘Cats before the new year. Villanova returns to action on Saturday, Jan. 2 against Georgetown, tip-off is TBD.