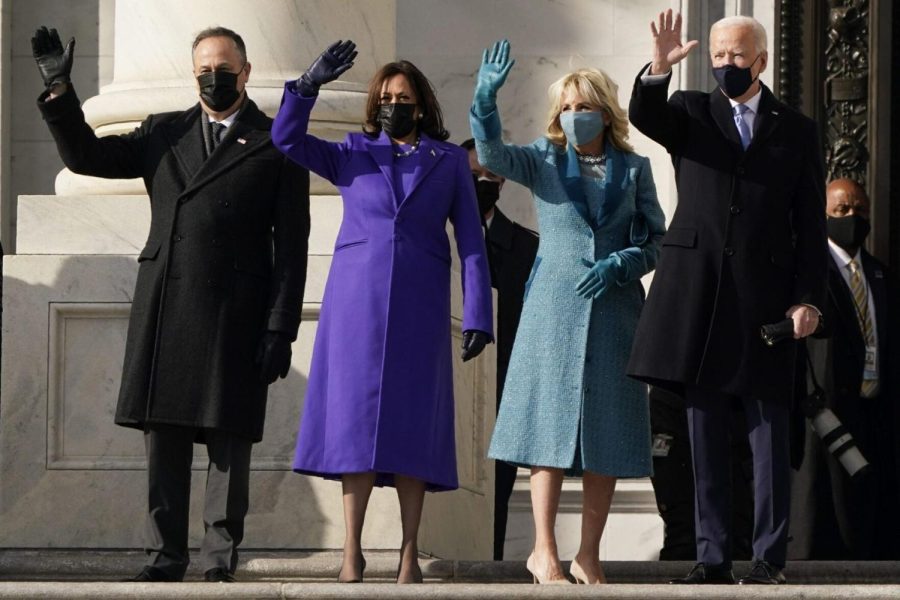 In the midst of a pandemic and political unrest, this year’s inauguration was not only an opportunity to dress up, but to set the tone. In order to symbolize what is to come these next four years, the fashion choices of those attending the ceremony were more significant than ever. From the emblematic color schemes to the notable designers behind each look, monochrome was the star of the show – and for good reason.

Monochrome fashion isn’t just worn for style. The choice to wear one single color head to toe is not only flattering, but simple in its straightforwardness. Monochrome outfits give off a certain demeanor of power which is quite fitting for the transfer of power.

Let’s start breaking down the inauguration fashion with Madam Vice President herself. As the first female and black woman Vice President, she represents change for the future, and so too did her outfit. At the swearing-in, Ms. Harris sported a bright purple monochromatic look by Christopher John Rogers.

The monochrome is significant in this sense because it is a nod to the single color suits that have been worn by male politicians of the past, a pattern she just recently broke. The purple hue represents both womens’ suffrage and the merge of the colors blue and red, signaling a message of peace between the Democratic and Republican parties.

Dr. Jill Biden was a showstopper as well. The now-First Lady purposefully worked with the fashion brand Markarian to create her inauguration ensemble. The reasoning behind working with Markarian, a three year old brand run by Alexandra O’Neal, was in order to support smaller businesses. Instead of sticking with a big name brand, she gave a chance to a small team of sewers in New York’s Garment District.

Dr. Biden’s Markmarian monochrome dress and coat were similar to those of the Vice President, but with a different hue. The ocean blue color she chose could represent the prevailing Democratic Party, but more importantly, the color signifies trust, confidence, and stability. Although, we all really know that the purpose behind the blue was to support her fellow Wildcats.

Vice President Harris wasn’t the only attendee sporting purple, and this was not a mere coincidence. Both Hillary Clinton and Michelle Obama wore different shades of purple for the event, both of whom stuck with the monochrome trend. Michelle Obama’s look consisted of a plum colored turtleneck and wide-legged boot cut pants, all designed by Sergio Hudson.

It is no surprise that LA-based Hudson was Obama’s designer of choice, as she has previously worked with many up-and-coming black designers. Since fans raved over Ms. Obama’s recent inauguration attire, there is no doubt that she will continue her tradition of emerging labels for upcoming designers for years to come.

Last but not least, there is the monochrome king himself: Bernie Sanders. By going with a relaxed winter look, Sanders paid tribute to his home state of Vermont. The focal point of his fashion statement, however, were the wool mittens that took the internet by storm. Jen Ellis, a teacher from Vermont, created the now-iconic mittens from recycled plastic and wool. From the intricate designs on the gloves to the crisp brown Burton coat, it is easy to say that Bernie Sanders had everyone beat when it came to inauguration fashion this year.

So it went. There were numerous other striking style moments: Jennifer Lopez and Katy Perry in all white ensembles; the sunshine yellow Prada coat of Amanda Gorman. The most striking trend of all was the pervasiveness of purple and monochrome, the signature styles this year.

Joe Biden’s inauguration is now shaping up to be one of the most stylish events of 2021 so far, and it is only the beginning. Here’s to four more years of iconic fashion moments and decoding the symbolism behind every piece. Cheers.