Wildcats Return with 76-74 Victory over Pirates 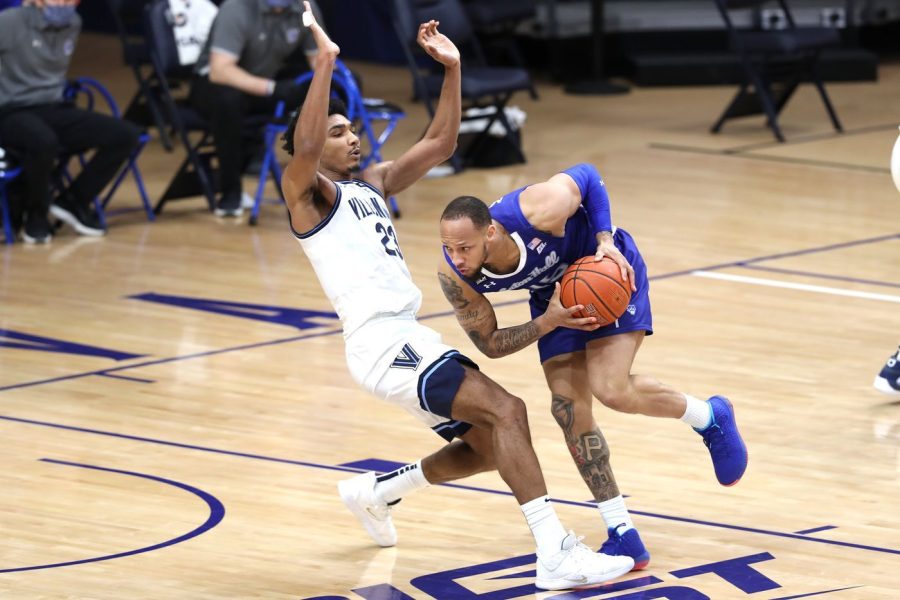 For the first time since December 23rd, the Villanova Wildcats men’s basketball team played a basketball game. After a long pause due to numerous COVID-19 issues, the Wildcats defeated the Seton Hall Pirates 76-74 to improve to 9-1 on the season and 4-0 in the Big East.

The Wildcats were led by senior guard Collin Gillespie, who finished with 22 points on 6-10 shooting, including 2-5 from deep and a crucial 8-8 from the free throw line. Senior wing Jermaine Samuels, who only practiced one day due to the COVID-19 positive test, finished with 20 points and nine rebounds while shooting 7-11 from the field and 3-3 from deep in 32 minutes.

The offense didn’t miss a beat over the extended pause, the Wildcats started a quick 4-6 from deep in the first six minutes of the game to race out to a 14-11 lead.

Both teams continued to make shots the last eight minutes of the half, and the Wildcats went into the break with a 38-35 lead. Gillespie led the way with ten points, while hitting two threes. Samuels, who was one of the two players who was diagnosed with COVID-19, added nine points and five rebounds. The Wildcats went 7-12 (58.3%) from deep in the first half. Both squads shot for over 50% in the first half, with Seton Hall finishing the half 6-11 (54.5%).

The Pirates were led by senior Sandro Mamukelashvili and junior Jared Rhoden. They combined for 28 of Seton Hall’s 35 first half points, while also grabbing five and three rebounds, respectively.

The Wildcats didn’t come out of the half firing on all cylinders, but they played solid basketball. A three by Jeremiah Robinson-Earl opened the scoring in the second half for the Wildcats, which would be his only three of the game.

Samuels seemed to be unaffected by the layoff, while the same couldn’t be said for redshirt junior Caleb Daniels, who was the other Wildcat who was diagnosed with COVID-19. Daniels struggled throughout and finished with 0 points, three rebounds, and four fouls in just 12 minutes.

The Pirates battled back, with the help of some clutch buckets from senior guard Shavar Reynolds, Jr., to eventually tie the game at 74 with 51 seconds left on a layup by junior Takal Molson, two of his four points on the game. Reynolds finished with 11 points and three assists, while also fouling out on an intentional foul at the end of the game.

Justin Moore was the only other Wildcat to finish in double digits, totaling 10 points on 4-10 shooting, dishing out seven assists, and grabbing five rebounds.

The Pirates were led by Mamukelashvili, who finished with 23 points, nine rebounds, and five assists. Seton Hall finished 8-20 (40%) from three point range, while Villanova finished 9-22 (40.9%) from deep.

Villanova is next scheduled to take on the Providence Friars Saturday at 2:30 at the Finneran Pavillon.