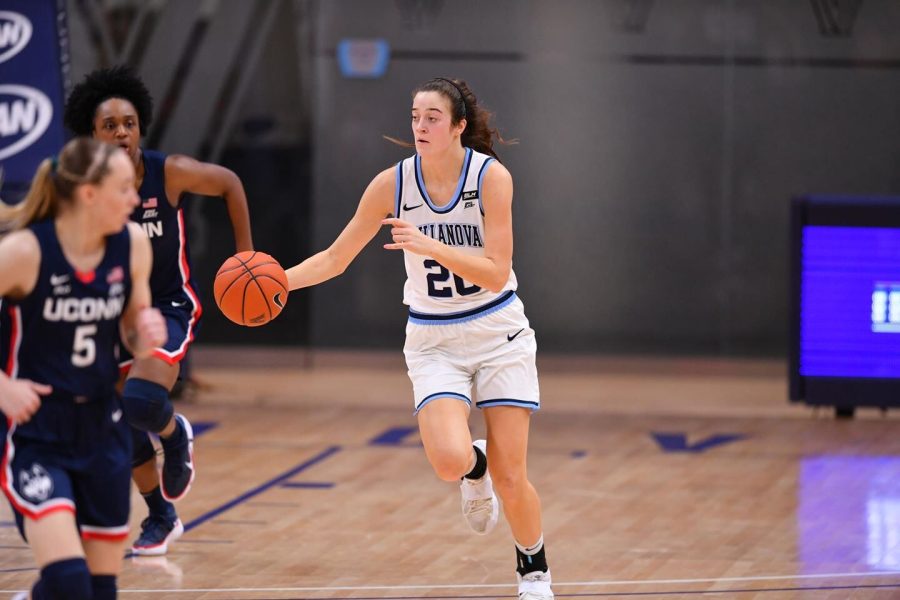 Villanova won their ninth game of the season and fourth in conference play in a nail-biting victory over St. John’s by a score of 81-78 after overtime. The Wildcats returned to the court for the first time in 19 days following multiple postponements.

Leilani Correa led all scorers with 29 points to go along with five assists for St. John’s.

The Wildcats got off to a slow start in the first quarter. The ‘Cats shot 31.3% (5-16) from the field in the opening period, never able to get out to a comfortable lead. The Wildcats’ defense weathered the Red Storm offense, as St. John’s could only score three points in the first five minutes. Garzon hit a big three to end an almost four-minute scoring drought as Villanova finished the quarter with a four-point lead.

Villanova jumped out to an eight-point lead at the start of the second, courtesy of two quick steals from Raven James and Siegrist. St. John’s struggled to get through the Wildcats defense, and the ‘Cats pounced, stretching their lead to 16 points on a 9-0 run with 5:16 left in the quarter. Villanova caught fire in the second, making over 60% of their shots, including 40% from long range (2-5). Correa kept St. John’s in the game, scoring 10 points in the quarter as the Red Storm went into halftime down 40-27. Garzon and Siegrist led the Wildcats at halftime with 10 points each.

Villanova could not put together enough solid possessions in the third quarter to put the game to bed. After committing only one turnover in the second quarter, the Wildcats gave the ball up six times in the third. The defense remained solid as the ‘Cats forced five turnovers from St. John’s, but it was Siegrist who ensured Villanova’s 13-point lead at the end of the third. With 12 points and four rebounds in the quarter, the sophomore shut down any comeback chances from the Red Storm.

Brianna Herlihy and Mortensen opened the fourth quarter with two scores to push the lead to 17, but St. John’s roared back. A 7-0 run from the Red Storm cut the lead to 10. Runyan stemmed the resurgence with a layup and three, but St. John’s never gave in. Despite never leading in the game, the away team reeled off 11 points to send the game into overtime. Villanova’s ball security issues continued in the fourth as the Wildcats tallied eight turnovers en route to blowing their lead.

Denise Dillon rallied her team to secure Villanova’s 43rd victory over St. John’s. Garzon came up big in overtime with two threes to regain a lead the Wildcats would never give up. Herlihy and Runyan stepped up down the stretch, hitting clutch free throws to seal their 81-78 win.

Villanova hosts Marquette in their next game scheduled for Wednesday, Jan. 27, at 7:00 p.m.