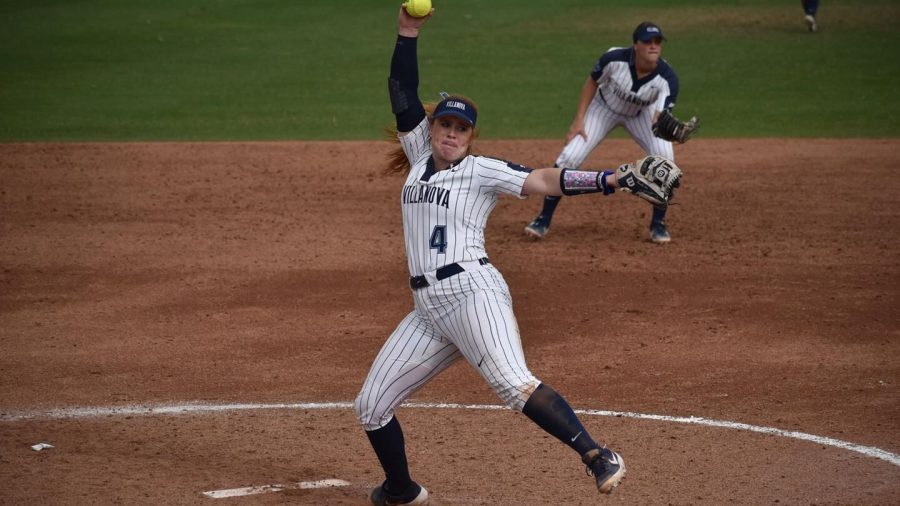 The Villanova women’s softball team was picked to finish atop the Big East standings this season in a preseason poll of head coaches, which was revealed by the conference office Monday.

Led by a veteran cast of 15 returning players, including 2019 Big East Player of the Year Paige Rauch, the Wildcats earned six first-place votes and a total of 62 points to come in ahead of 2019 conference champion DePaul (three first-place votes, 55 points) in the predicted order of finish.

The results of the annual poll further fuels the Wildcats’ excitement for the 2021 season, which begins later this month. Villanova went 14-13 during the abbreviated 2020 season and is coming off a 2019 appearance in the Big East championship game after it upset top-seeded St. John’s in semifinal action of the conference tournament. The team was on the doorstep to begin conference play and was having one of the best offensive seasons in program history when the 2020 season was halted. Among the highlights for the Wildcats in a 27-game slate last season were victories over No. 9 Florida State and No. 23 Baylor, which both came during a grueling five-game stretch in a tournament in Arkansas where Villanova also played two games against the 22nd-ranked and host Razorbacks. Tournament stops in Jacksonville, Orlando and Kissimmee plus a trip out west to a tournament at San Diego rounded out the Wildcats’ schedule.

Villanova put up unprecedented offensive numbers in 2020, with its team’s slugging percentage (.495) and OPS (.861) each on track to set single season program records. The team was also on pace to shatter its single season home run record, which had been set just one year earlier in 2019. The driving force behind the offensive onslaught was Rauch, who had 12 home runs in 2020 and was named a Softball America shortened season All-American and was ranked No. 25 on the Softball AmericaShortened Season Top 100 List. Rauch slashed .405/.480/.917 with 27 runs scored and 28 runs batted in a year ago. She also was the ace of the Wildcats pitching staff and went 12-4 with a 2.25 ERA and 97 strikeouts over 90 innings pitched. Rauch had nine complete games in 15 starts and held opponents to a .217 batting average against her.

Villanova is a well-experienced and battle-tested squad entering 2021, with six players returning who appeared in at least 25 of the 27 games last season. Senior infielder Angela Giampolo batted .317 as a junior and will begin this season with a streak of 125 consecutive games played.

Other major contributors in 2020 were junior Megan Kern and sophomore Chloe Smith, who each made impressions in their first season with the Wildcats. Smith was another power threat in the lineup who hit .365 with five home runs and a .624 slugging percentage, while Kern tied Rauch for the team lead with 13 walks and hit .364/.436/.494 on the year. Junior outfielder Sydney Hayes started all 27 games and hit three home runs while posting a .393 on-base percentage and a .510 slugging percentage. Sophomore Ally Jones and junior Ryan Henry split catching duties behind the plate, both returning along with senior Julia DaCosta, who has started 104 games.

DePaul finished second to Villanova in the preseason poll, while St. John’s and Connecticut (43 points) were tied for third. The poll was rounded out by Creighton (40 points), Butler (30 points), Seton Hall (26 points), Providence (17 points) and Georgetown (8 points).

The Wildcats are set to open their season Saturday, February 20th in a double header against George Washington in Washington D.C. They will begin Big East play on March 20th, with a three game series against Butler.