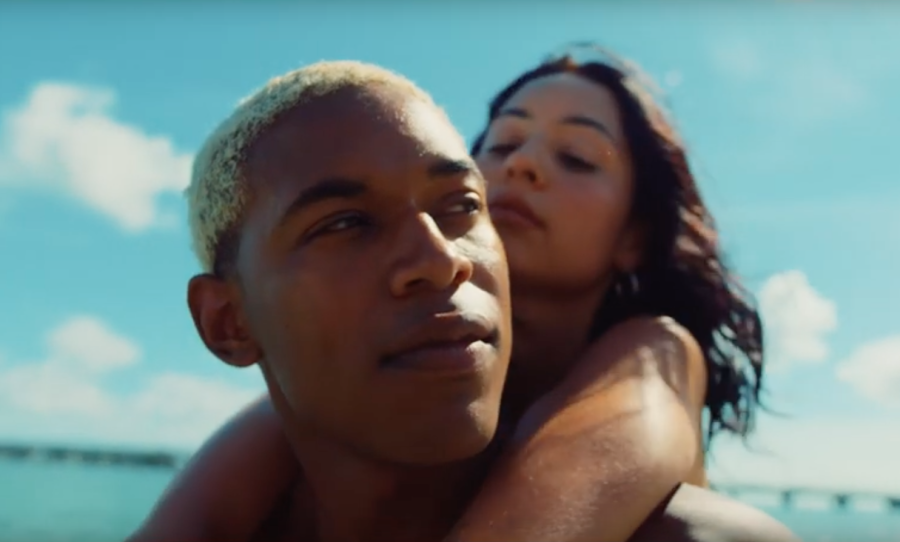 Kelvin Harris Jr. (on left) and Alexa Demie (on right) star in "Waves."

Cinephiles love A24 for its award-winning releases, like “Lady Bird,” “Moonlight” and “The Florida Project.” Less widely-celebrated is the A24 film “Waves.”

“Waves” premiered at Telluride Film Festival on Aug. 30, 2019, and had a limited nationwide release on Nov. 15, 2019. It was directed by the young, up-and-coming director Trey Edward Shults.

Like “Moonlight” and “The Florida Project,” “Waves” also takes place in Florida. The film follows siblings Tyler Williams (Kelvin Harrison Jr.) and Emily Williams (Taylor Russell) as they navigate the stresses of adolescence and teen romance.

The cast of “Waves” features a few stars. Tyler’s girlfriend, Alexis, is played by “Euphoria” actress Alexa Demie. Other stars include Sterling K. Brown of “This Is Us” and “Black Panther” fame, and Lucas Hedges, an award-winning young actor known for his roles in “Manchester by the Sea,” “Lady Bird” and “Three Billboards Outside Ebbing, Missouri.”

The cast is incredibly diverse without the film centering around the background of its actors. It simply tells a story. It’s a wild and intense story that most viewers can’t actually relate to, yet it still feels relatable to everyone, something made feasible only by the incredible talent of the film’s actors. Not for a moment is there a lack of immersion in the story. The characters Tyler and Alexis are especially convincing as a couple.

We get three different views of romantic relationships in the film: Alexis and Tyler, Tyler’s parents, and Tyler’s younger sister Emily and her boyfriend Luke. In the first half of the film, we see Tyler, a successful high school wrestler, hide his shoulder injury from everyone and self-medicate by stealing his father’s painkillers in order to continue competing. Meanwhile, Alexis receives a positive pregnancy test. These stressful situations test Alexis and Tyler’s relationship, and eventually come to a head on prom night. In the second half of the film, the director turns the attention to Tyler’s parents and to Emily and Luke, relationships that have struggles but are not quite as toxic.

The shots in the film (that is, the mise-en-scene) truly capture the beauty of southern Florida, with its vibrant blue, yellows and purple hues.

The soundtrack was perhaps the most interesting aspect of the film. It features a mix of modern rock (Tame Impala, Animal Collective, Radiohead and Alabama Shakes), R&B (Frank Ocean, SZA, H.E.R. and Amy Winehouse), and rap (Kanye West, Kendrick Lamar and Tyler, the Creator).

In most modern teen movies I have seen, the director either lazily slaps on bubblegum pop, or anachronistically inserts 1970s and 1980s music to suit his or her personal tastes. But “Waves” showcases some of the best of the current generation of music.

The instrumental score was arranged by Trent Reznor and Atticus Ross from the band Nine Inch Nails. This duo has provided the ethereal scores to other iconic films such as “The Social Network,” “Gone Girl” and even the recent Pixar film “Soul.” Ross and Reznor’s otherworldly electronic soundscapes intensify the emotions that “Waves” already induces in the viewer.

All these aspects make the film not just great, but a film for the contemporary era. It is quintessentially Gen Z; it’s accurate in its music choice, as well as in its acting and dialogue, in a time when such accuracy in teen movies is rare.

The themes of the film are poignant, dealing with forgiveness, redemption and healing. Without being puritanical in the slightest, the film demonstrates a fondness for God that can feel hard to find in 21st century cinema. The characters, especially Emily and Tyler’s father, turn to God when dealing with their problems. In an emotional and pivotal scene toward the end of the film, Emily’s father ends a conversation by quoting the Bible, saying, “Hatred stirs up strife, but love covers all offenses.”

The film covers mature themes without being gratuitously sexual and crude, which can’t be said for many contemporary teen films and shows. “Waves” is something you can actually watch with your parents over break without constantly cringing from awkwardness.

In conclusion, “Waves” is woefully underrated and far too unknown. The film can be rented on Amazon Prime Video or streamed on Showtime for free. Most University students can watch it on Showtime, given that the service comes with the Spotify Premium Student plan. In an era when superhero and action films dominate commercially, it’s important to watch your fair share of dramas, especially ones as masterful as “Waves.”