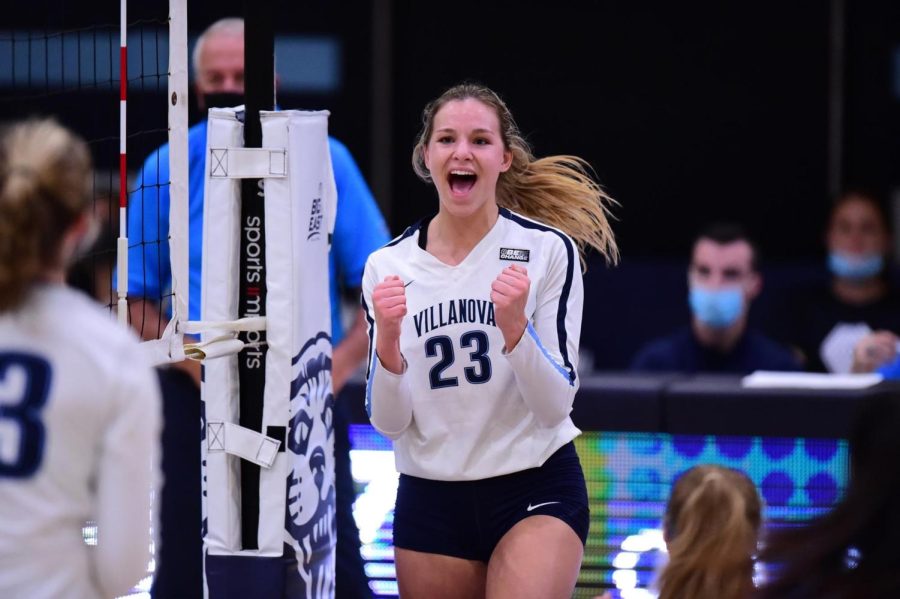 Kiera Booth had 17 kills in Villanova’s win over Fordham.

After losing all three matches in Dayton last week, Villanova was looking for some positive outcomes heading into conference play, but it was unable to capitalize on the opportunities at the Yale Invitational. It lost the first two matches to Yale and Sacred Heart, before beating Fordham to snap a six-game losing streak.

Coach Josh Steinbach knew exactly what the team needed to do to get back this weekend.

“It’s not that complicated of a formula,” Steinbach said. “We got to serve and pass better and we’ve got to stay together as a team.”

Villanova did this in the first match versus Yale, getting six aces to eight errors, while also getting 31 assists from senior Belle Morgan. This led to both sophomore Rose Crist and junior Riley Homer each getting 10 kills in the match.

“Rose and Riley are consistent attackers,” Steinbach said, “They can get a lot of kills, but that is all based on the premise of passing and setting well. A lot of teams we’ve played like Dayton and Illinois scout well, and know how to put Riley and Rose in uncomfortable positions, so we got to find a way to work around that.”

However, despite being good at all these phases in the Yale match, Villanova still lost in five sets to the Bulldogs. Yale took home the first set, 25-14, off five kills from sophomore Mila Yarich.

Villanova took the second and third sets by scores of 25-21 and 25-18, with a couple of well-timed aces by senior Maddie Scheider and four kills from junior Kiera Booth. There were 16 attack errors by Yale in those sets alone.

Villanova started making mistakes in the fourth set before giving up nine kills in a row, including four by Yale sophomore Gigi Barr.

Villanova was not able to keep the passing and serving up in the Sacred Heart match either. It lost in three sets (25-22, 25-19, 25-22) to a Sacred Heart team that is consistently leading its conference, and Villanova struggled on a lot of those key aspects.

The Wildcats made 11 service errors to only two aces. Villanova’s leading passer was sophomore Ellery Gray, who made her first career start, with 17 assists. Morgan did not play in this match for unknown reasons. The lack of assists led to no Wildcat getting more than 10 kills, with Booth leading the team with nine.

The ‘Cats nearly allowed Fordham to take the first two sets but fought back and won the second, which sparked enough momentum to dominate the final two sets. Villanova forced Fordham into committing 30 attacking errors.

Andrea Campos started at setter and had 22 assists for the Wildcats. Booth had 17 kills, including the one to complete the comeback in the second set. After not playing in the first two games due to injury, junior Taryn Whittingham had four aces for Villanova.

Overall, Villanova got back to what it is good at, which is passing and serving. Good things happened throughout this tournament. However, injuries might be becoming an issue for the Wildcats.

This was the last weekend tournament for Villanova. It will start conference play this coming week, facing Xavier (7-3) on Friday and Creighton (8-3) on Sunday. Xavier is just coming off a big five-set win over Cincinnati and also is home to the reigning Big East offensive player of the week, senior setter Carrigan O’Reilly. Creighton, having just lost to Rice, is still a Big East favorite, especially after beating USC and nearly beating Nebraska earlier this season. It is home to the reigning Big East Defensive Player of the Week, senior Allison Whitten.