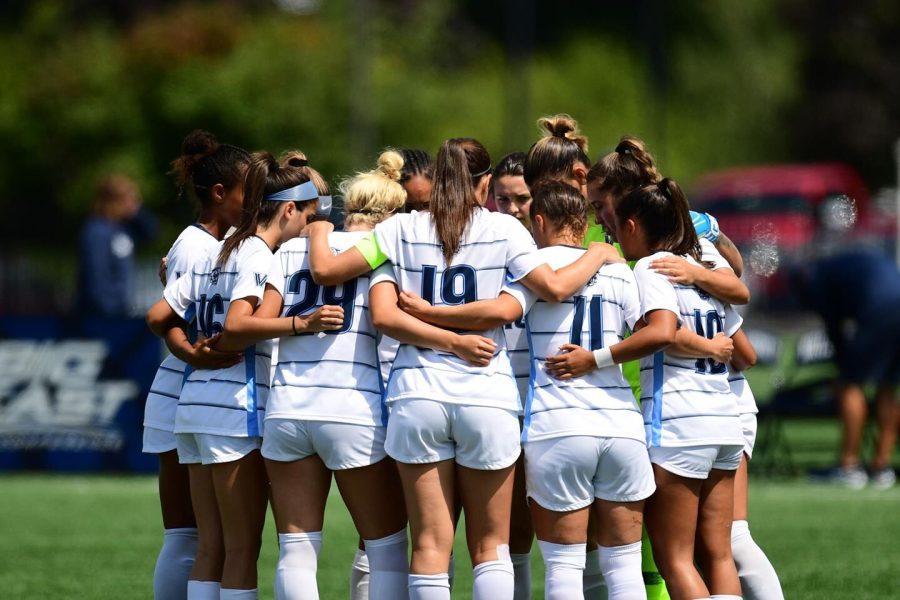 The women's soccer team huddles before a game.

The Villanova women’s soccer team was picked to finish second in the Big East’s East Division in the spring 2021 season. Junior midfielder Brice McInroy was named to the preseason all-Big East team in her second season at Villanova.

Villanova was picked to finish second in the East Division, receiving 19 points. The Hoyas were picked first, receiving 25 points and five first place votes. Providence placed third with 18 points and one first place vote, UConn in fourth with 12 points, St. John’s in fifth with 11 points and Seton Hall finished in last with 5 points. In the other division, Xavier was atop the Midwest poll with 16 points, including four out of the five available first-place nods. DePaul followed in second with 12 points and the one remaining first place vote, edging Butler, which tallied 11 points. Marquette followed in fourth with six points, while Creighton rounded out the Midwest with five points.

The Wildcats’ second place ranking is attributed to their success last year, finishing the 2019 season with a winning record of 10-7-3. The Wildcats scored 27 goals and had 23 assists in total. They also succeeded in having a higher shot percentage than their opponents, as well as more saves, corner kicks and less fouls than opponents. These stats, on top of a preseason all-Big East team member, add up to the second place team in the newly formed East division.

McInroy’s spot on the Preseason all-Big East team is also unsurprising. Last season, she was named to the all-Big East first team and the United Soccer Coaches NCAA Division I all-East region third team. The midfielder also helped lead the Wildcats back to the Big East Tournament semifinals for the first time in 15 years with her impressive game-changing stats. She started in all 20 games and all nine conference contests, scoring nine goals and dishing out two assists for a total of 20 points. Out of these nine goals, five that she netted were game-winning goals, including four in 1-0 wins, and two against top 25 ranked teams. She also scored two goals in two separate games last season, once at Temple and once against St. John’s.

McInroy started her collegiate career at the University of Tennessee, but transferred to Villanova after her freshman year. McInroy chose Villanova because she “fell in love with the campus and the team. It’s so beautiful here and the people are genuine, friendly, and offer a strong sense of community,” as told to Villanova.com. Also having grown up in Pennsylvania and having played club soccer throughout the state, she noted that she knew the area around Villanova well and felt “right at home.”

Butler, DePaul and Xavier all have multiple players on the first team and are joined by players from Creighton, Georgetown, Providence and St. John’s. Due to the use of divisions, teams will only play other teams in their divisions, so the Wildcats will avoid the Midwest teams.

McInroy and the Wildcats are scheduled to open their spring 2021 season on Sunday, Feb. 14 at La Salle. Their Big East competition begins on March 4 against St. John’s.