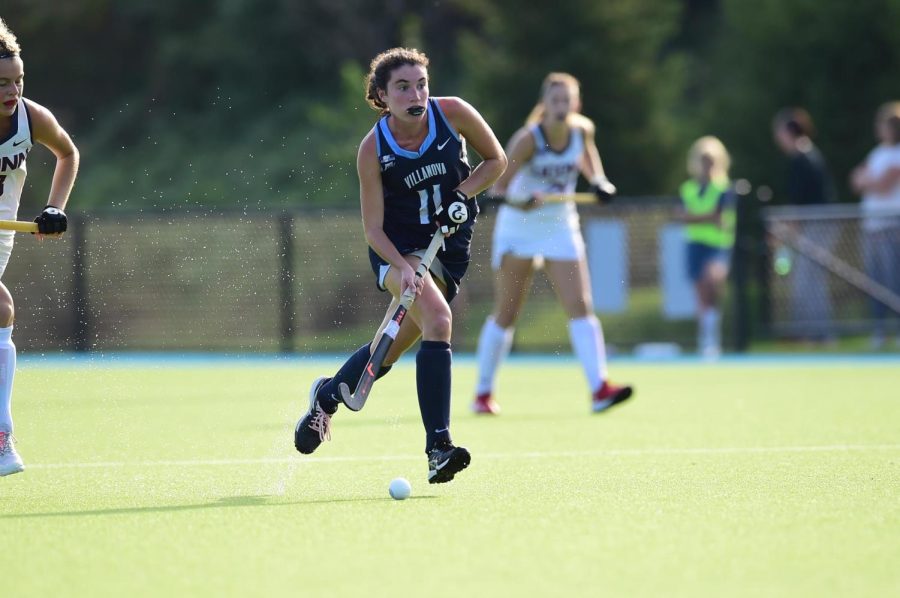 Meghan Mitchell scored one goal and had an assist in Villanova win over Penn.

The Villanova field hockey team beat the University of Pennsylvania, 2-1, in an overtime thriller Sunday afternoon. With the win, the Wildcats improved their record to 4-1, while the Quakers still remain winless at 0-4.

Sophomore goalkeeper Emma Lepert recorded five saves in the first two quarters, keeping the game scoreless after the first half. But the Quakers scored just a few minutes into the the third quarter to take a 1-0 lead.

Down a goal, the Wildcats picked up the intensity. With lock down defense in the back led by junior defenseman Sabine de Ruijter and three more saves from Leppert, ‘Nova did not allow any more goals through, allowing them to focus on their attack up top.

“She sees really good passing lanes, and I think her growth has really shown,” Milhous said. “She is so much more poised with the ball, and her defensive skills have really improved.”

In the final minutes of regulation, freshman forward Toni Minichello shot the ball past two Quaker defenders to tie the score and force overtime.

Heading into overtime, Milhous noted how the Wildcats had “all the momentum,” and felt that the team was playing with confidence.

“There wasn’t a thought in my mind that we were going to lose,” Milhous said. “I think that’s exactly how our players felt as well.”

‘Nova’s confidence was clear as the Wildcats took control of the 7v7 overtime, putting themselves in a scoring position on the attacking side.

In the end, it was star forward Meghan Mitchell who scored the winning goal, as she dove to deflect the ball off a pass from sophomore midfielder Anne Drabbe.

It was no surprise that Mitchell helped clinch the victory for the Wildcats, as she’s been a standout forward all season.

“Our ‘core values and standards’ are what make up the culture of the team,” Milhous explained. “[Mitchell] is the epitome of that: passion, growth and accountability.”

While Milhous also praised Mitchell for her “amazing skill set and incredible speed,” she credited the overtime victory for being an exciting team win.

“I’m mostly just proud because we had a game plan and our girls stuck to it for 60 full minutes,” Milhous said.

The Wildcats head into conference play this upcoming week.

“We just want to buckle down—cleaning up and then mastering details,” Milhous said. “A lot of light bulbs went off and a lot of learning took place this past week in practice. I think that really showed against Penn, and that’s the stuff we are going to build off of before going into our Big East play.”

The Wildcats will travel to Rhode Island to take on 1-5 Providence in their first Big East game of the season on Friday, Sept. 16 at 4 p.m.