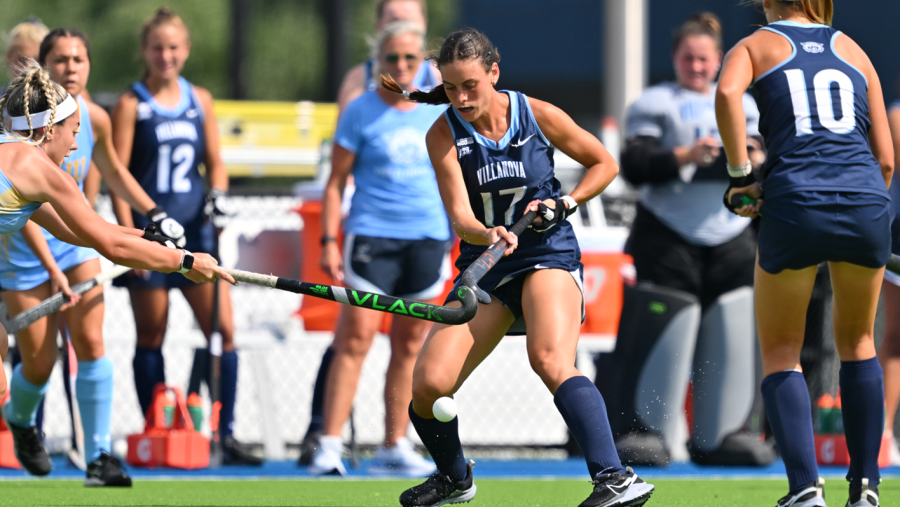 Amanda Middleman scored her fifth game of the season against Hofstra.

The Villanova field hockey team came out of last weekend with a 3-1 record after taking down Hofstra on Friday and losing to Ball State on Sunday.

The Wildcats defeated the Pride, 3-2, but fell short to the Cardinals, 4-3.

Against Hofstra, the Wildcats started off strong, taking an early lead in the first quarter with a goal from junior forward Amanda Middleman, her fifth of the season.

The women continued their momentum into the second quarter, improving their lead to 2-0 with a goal from graduate midfielder Makenna Maguire. Senior forward Maggie Mick followed this with another goal off a stellar feed from junior forward Meghan Mitchell to extend the lead to 3-0.

The women had a decisive lead heading into halftime, but Hofstra was hungry for a potential comeback. After a scoreless third quarter, the Pride put up a fight heading into the fourth quarter, but they fell short. Despite having 12 corner attempts in the final quarter, Hofstra was only able to capitalize on two of its opportunities.

The Wildcats showed strong defense in the win with sophomore goalie Emma Leppert saving six shots, and the defensive line blocking two of the eight shots in the final minutes of the game.

With the win, the team improved to 3-0 on the season, the program’s best start since 2008.

In the second game of the weekend, Ball State snapped the Wildcats’ win streak, handing ‘Nova its first loss of the season.

The Cardinals took an early lead in the game, scoring two goals in the first quarter and adding on another in the second.

The Wildcats responded with a goal from sophomore midfielder Anne Drabbe in the middle of the second followed by a goal from Mitchell to even the score. The Cardinals quickly answered with a third goal to take a 3-2 lead into the halftime break.

Ball State carried its momentum in the second half, scoring a goal just a few minutes into the third quarter to improve its lead to 4-2.

Despite trailing, the Wildcats continued to put up a fight with a late goal from Maguire in the fourth quarter to cut the Cardinal lead to one. But with a few saves in the final minutes, the Cardinals came out victorious, escaping ‘Nova’s comeback attempt.

Regardless of the recent loss, the Wildcats have been putting up big stats early this season, with 20.3 shots per game, in comparison to their opponents, who only have 12.5 so far. Villanova has also been strong on the defensive end, with 22 saves from goalkeepers Claire Borman and Leppert.

The Wildcats will play their next game on the road as they face University of Pennsylvania on Sunday, Sept. 11 at 12 p.m.