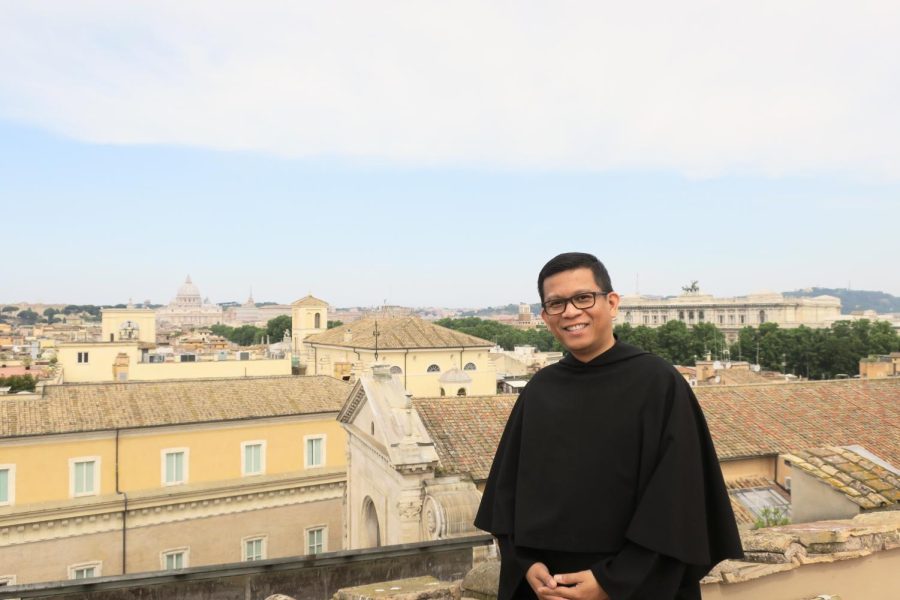 “One of the things I love about celebrating Mass here at Villanova is the student involvement and participation,” Father Aldo Potencio, O.S.A., said. “I see a lot of student leaders who volunteer to join the worshiping community. They serve, read and sing. For me, that is very important because I believe you create a community through action.”

This week, Fr. Aldo offers Villanovans a glimpse into his life as an Augustinian at Villanova University in the Augustinians of Villanova Column.

Born and raised in the Philippines, Fr. Aldo attended a school run by sisters of the Order of Saint Augustine, commonly referred to as Augustinian sisters. Fr. Aldo was exposed to the Augustinian way of life from a young age, and he grew up surrounded by the Order’s many traditions. He admired the Augustinian sisters who taught him and were mentors to him. Even though he discerned religious life and priesthood during high school, he went on to study physical therapy.

“When I started thinking about religious life and the priesthood, I was drawn to the familiarity of the Augustinian spirituality,” Fr. Aldo said. “My brother became an Augustinian priest right after high school, so his dedication and my Augustinian roots helped me make my decision.”

“Church was a large part of my culture growing up,” Fr. Aldo said. “My friends and I attended an Augustinian Catholic school, so faith and what we did on a day-to-day basis became very intertwined. I think the strong connection of faith, family and community allowed each of us to truly be open to our vocations.”

After completing his theological studies in Chicago as part of the Formation process, Fr. Aldo was ordained an Augustinian priest in 2017. He was then assigned to St. Nicholas of Tolentine Church in the Bronx borough, New York. After a few years serving the Parish, Fr. Aldo was then sent by the Provincial to join the Novitiate Community in Radnor, Pennsylvania.

“Eventually, I started helping out in Campus Ministry here at Villanova,” Fr. Aldo said. “I love the welcoming spirit Villanova has, and I continue to see how we live it every day as one community. When we gather together on special occasions like the Feast of St. Augustine, Orientation, or the Baccalaureate Mass, there is always a good spirit. Although not all members of the Villanova community are Catholics, we all come together to celebrate these special gatherings. Villanova Masses are so welcoming, a true testament to Catholicism as well as our Augustinian values.”

Fr. Aldo serves as the Chaplain at the Villanova University Charles Widger School of Law, where he often celebrates Mass, Adoration, and offers Confession in the chapel on the first floor. Every Wednesday at 12:30 p.m., Fr. Aldo leads law school students in prayer at Mass. He also continues to celebrate student Masses on Sundays at the St. Thomas of Villanova Church.

In Fr. Aldo’s spare time, he loves to play the guitar, paint with watercolors and reminisce on his many travels around the world. Given his Filipino roots, Fr. Aldo enjoys spending time with his family in the Philippines. Although Spanish is not his first nor second language, Fr. Aldo traveled to Guatemala and the Dominican Republic to study it. Today, Fr. Aldo celebrates Spanish Mass every other Saturday in Corr Chapel at 5:30 p.m.