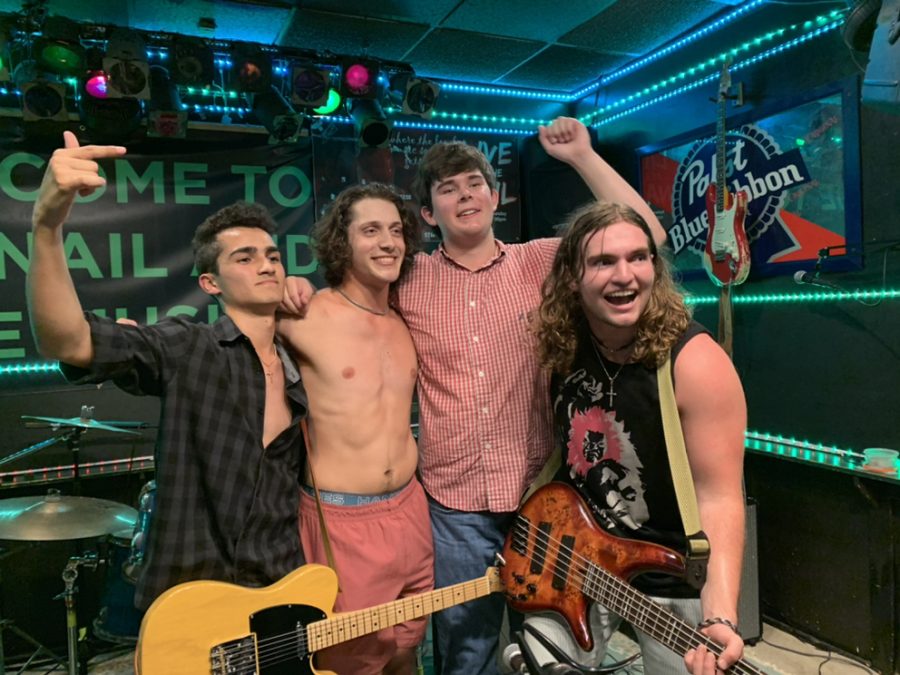 Courtesy of Off the Reserve

Off the Reserve is a band of Villanova students.

The room is hushed but eager. The crowd waits in anticipation as the guitarists tune up. There is silence, and then the iconic opening riff of U2’s “Vertigo” blares out of the amplifier. The room erupts into cheers as the audience begins to sing along.

This is not a sold-out Wells Fargo arena concert. In fact, it’s quite the opposite. A block away from the Ardmore SEPTA stop at 9:15 p.m., dozens of Villanova students are packed into the Rusty Nail, a small dive bar off Haverford Road, to see the band Off the Reserve perform.

Off the Reserve was formed out of an impromptu jam session outside of Donahue Hall in the fall of 2020. Using the extension cords for the COVID-friendly tents to power their amplifiers, Brendan King, Dominic Veltri and Michael Castelli began making music together. They registered for practice space, and every Saturday they lugged their equipment from Stanford Hall to St. Mary’s Hall. That is when Michael Simeone (who goes by Indigo Mane), a fellow freshman living in St. Mary’s, began joining their practices as an extra guitarist and vocalist.

The band gives credit to Villanova for helping it get off the ground.

“They gave us our first gig,” Castelli said, recalling an open mic night at the steps of Corr Hall set up by the Campus Activities Team in 2020.

Many band names come from seemingly meaningless instances, and Off the Reserve is no different. In the middle of a boring week, Castelli decided to watch “Madagascar 2.”

With musical influences ranging from The Beatles and Pink Floyd to classical piano concertos to Primus and Kanye West, Off the Reserve has roots from all sides of music, which come together to form their tight, professional sound.

Additionally, all its lighting and sound equipment is handled by the VU Tech Crew.

When one walks into the Rusty Nail, it feels like a typical dive bar. The room is split in two. On one side is a bar, and the other has a small stage. In the back there is a dart board, a pool table and a couple TVs playing the Phillies game. The bar books local acts on Friday nights and charges a $10 cover. King, the guitarist and drummer, booked the show in July, and with everyone living at home over the summer, they were only able to practice once, unplugged and without a drum set, before performing.

The show had a great turnout and was the largest Off the Reserve has seen yet, which only elevated its set.

“It was the most energetic performance I had ever been a part of,” King said. “It was off the wall, and you could tell that we as a band fed off of that.”

Whether the band was announcing that it was switching instruments, playing a song it did not prepare or simply tuning up, everything Off the Reserve did was met with cheers from fellow students and friends.

This is not each member’s only band. King is a part of two other bands, Kings and Jacks and Fahrenheit, and Simeone has Indigo Mane, whose music can be found on Spotify, Apple Music or his website, www.indigomane.com.

Off the Reserve will play at Chaplin’s in Spring City, Pennsylvania, on Friday, Sept. 30. The band also has a Halloween show in the works.

With upcoming shows, Off the Reserve is working on original music, which is expected to premiere soon.

An Off the Reserve website is in the works, but in the meantime, all information can be found at indigomane.com.