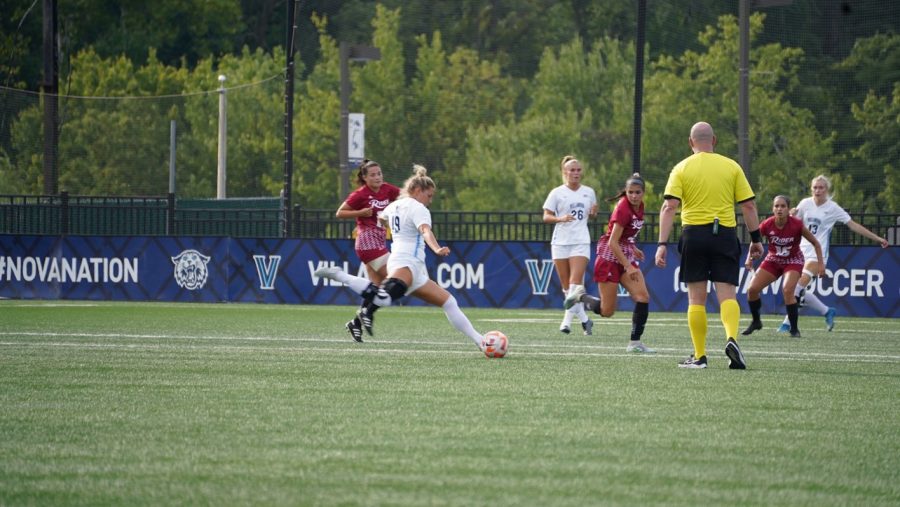 Lauren Ashman (above) recorded five shots on goal in the loss.

Villanova Women’s Soccer lost 1-0 to the Rider Broncs at Higgins Soccer Complex on Thursday afternoon, dropping to 0-2-1 on the season after losing at Boston College and playing to a draw against Delaware at home. Rider senior forward Makenzie Rodrigues scored the afternoon’s lone goal off of an assist from Camryn Dees in the 52nd minute. Rodrigues laced a shot from just outside the 18-yard box that found the top left corner of the net.

Alongside Rodrigues, junior keeper Ellie Sciancalepore was the hero for the Broncs in their first-ever win over the Wildcats, making seven saves and keeping a clean sheet.

The Wildcats outshot the Broncs 22-7, but the Broncs were able to put five of their seven shots on frame, as opposed to just seven of the Wildcats’ 22 shots. The ‘Cats generated 12 corner kick opportunities but could not convert any into a goal.

The ‘Cats dominated through the early portion of the match, keeping the ball in the attacking third and utilizing vertical runs that were able to break through the Broncs’ back line, but none of the Wildcats’ efforts were able to find the back of the net. Around the 22nd minute, sophomore forward Megan Donnelly put together a creative solo run, but the shot at the end of it was deflected over the net.

The ‘Cats continued to attack throughout the second half of the match, dominating the run of play and possession for the duration of the contest. Trouble came for the ‘Cats in the final third, as no one seemed to be able to finish any of the chances that were being created.

The Wildcats will look for their first win of the season Sept. 1, when they host the Penn Quakers. Kickoff between the Quakers and the ‘Cats at Higgins Soccer Complex is slated for 4 P.M.