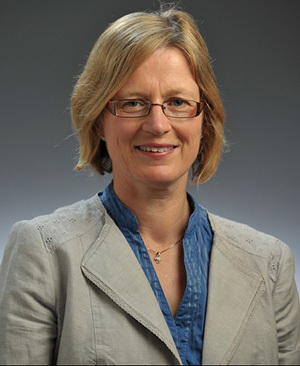 On Monday, April 11, in Driscoll Room 132, the University presented its Civitas Dei Medal to Celia Deane-Drummond, Ph.D., of Oxford University.

Deane-Drummond holds doctorates in plant physiology and theology. Deane-Drummond is the director of the Laudato Si’ Research Institute and a senior research fellow in theology at Oxford.

According to the University Office of Mission and Ministry, the Civitas Dei Medal “honors Catholics who have made exemplary contributions to the Catholic intellectual tradition and the pursuit of truth, beauty, and goodness.” The medal’s name comes from the Latin name of St. Augustine’s City of God. The image on the medal is an adaptation of a stained glass window that depicts Augustine in the St. Thomas of Villanova Church, which is located on campus. University President Rev. Peter M. Donohue, O.S.A., Ph.D. presented the award.

Deane-Drummond’s research and contributions focus on the intersection of her two fields of expertise—science and theology.

“Against the background of COP 26 on climate change and COP 15 on biodiversity, Dr. Deane-Drummond intends to show how, in spite of objections from some scholars, biblical ideas embedded in wisdom and other texts serve to generate a different collective ethos relevant for enabling environmental responsibility,” a University press release said regarding Deane- Drummond’s receiving the award and the medal. “This heightens the need for specific virtues to be fostered individually and within communities, such as justice, practical wisdom, courage, humility, temperance, faith, hope and charity, to name a few.”

On top of the other prestigious positions that she holds, Deane-Drummond was also instrumental in the formation of the European Forum for the Study of Religion and the Environment and served as the chair of the forum from 2011 to 2018. She is also on the executive committee and is a trustee of the International Society For Science and Religion. Another of her accomplishments is being an inaugural co-editor of the international journal Philosophy, Theology, and the Sciences, and she is a member of the editorial board of the University’s own Journal of Catholic Social Thought.

According to the press release, Deane-Drummond is also a well-known and accomplished writer, scholar and researcher. Some of her most recent book publications include “Shadow Sophia” (2021), “Theology and Evolutionary Anthropology” (2020), ”Theological Ethics Through a Multispecies Lens” (2019) and ”Theology and Ecology Across the Disciplines” (2018). By blending secular and theological thought, Deane-Drummond was the perfect person to receive the Civitas Dei Medal according to Augustinian thought about the ideal citizen. Her ability to intersect two very different fields of study to imagine a better world makes her an outstanding choice for this year’s Civitas Dei Medal award.

Deane-Drummond shared initial reaction when hearing the news of receiving the award.

“It was a tremendous shock followed by gratitude,” she said.

Deane-Drummond also spoke about her favorite aspects of working in both theology and science. She broke it down into three categories including collaboration, writing and community. Deane-Drummond expressed that collaboration allows for individuals’ ideas to be enlarged and enhanced, furthering the achievements of shared goals. She also spoke about the ability to be inspired by others and appreciating the different starting points of all members involved in her work.

Deane-Drummond also spoke about the ability of her writing to contribute to the fields in which she performs her research, allowing others to be inspired and appreciate the work she does. She stated that prayer is tied into her writing and feels as though it is the vocation she was meant to take on in life.

Finally, the theologian and scientist spoke about the importance of building community.

“I catch excitement in enabling others to go beyond what they thought they might be able to do,” Deane-Drummond said.

Despite her success in her work, Deane-Drummond spoke about the challenges she faced during her career, addressing the pressure of working in a lesser known university in England early in her career and facing sexism in both theological and scientific fields.

“I did not think I would get a position in theology,” Deane-Drummond said. “My parents thought going from the sciences to theology was a very risky thing to do, but I felt called. You have to sustain with integrity where you are. It was a huge risk and quite painful, but I could not imagine doing anything else.”

Deane-Drummond also mentioned that she takes one day per week to relax and spend time with others, particularly family. She also spoke about how she leans on your family to deal with the challenges of her career.

“It is difficult to keep family and work balanced, since I am a mother and a partner and I work,” Deane-Drummond said. “I am lucky to have a partner who supports me and my compulsion for work.”

Deane-Drummond spoke about her role as a spiritual director as well and how it grounds her.

“Being a spiritual director compensates the intensity of academia,” she said. “I get to go through the process of allowing others to feel the presence of God in their lives. I get to be committed to seeing other people grow spiritually, not just intellectually.”

Overall, Deane-Drummond thanks the University for the honor of receiving the medal and will continue her work as a “lifelong learner.”