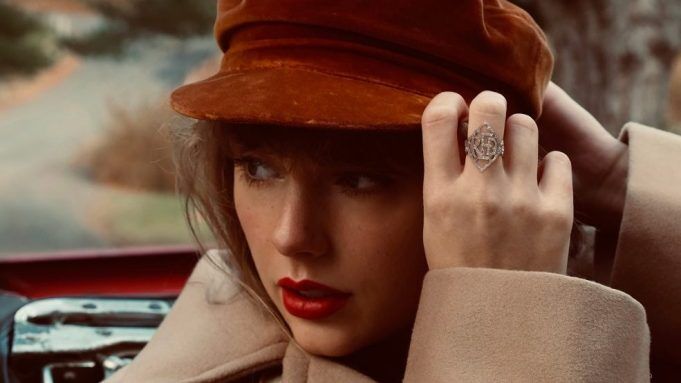 The week of Nov. 8 was a busy time for superstar Taylor Swift. After months since her last album release of “Fearless (Taylor’s Version),” Swifties and casual fans finally got to hear “Red (Taylor’s Version)” at midnight on Nov. 12. However, unlike the more lowkey “Fearless” release, “Red” is bringing much more to the table for fans.

Swift announced the release of the album on Jun. 18, leaving fans confused and upset that there was such a huge time gap between the albums. “Fearless” was released on Apr 9, 2021. However, a few weeks ago, Swift pushed up the release for “Red” by a week for unknown reasons.

She kicked off the release with two late night talk show appearances, starting off with Jimmy Fallon on the night of Nov. 11, followed immediately by an interview with Seth Meyers. The day after the album drop, Swift joined Jonathan Majors on Saturday Night Live, where she performed the much anticipated 10 minute version of fan favorite, “All Too Well.” This high level of promotion for the album is extremely refreshing, as the pandemic has hindered artists’ ability to promote their projects.

“Red” will be Swift’s second re-recorded album in wake of detrimental legal issues with Scooter Braun and her old management team. The past year revealed Braun and management owning Swift’s songs, not giving her the chance to own her own art and selling songs off to whoever they pleased.

With all this “Red” excitement, an unexpected track of Swift’s gained tons of popularity on TikTok in the past few weeks. “Enchanted,” off of her third album, “Speak Now,” has been a huge TikTok trend. Users have been making videos with the song’s bridge where Swift sings, “Please don’t be in love with someone else,” a string of lyrics to which many users are finding connections. This has caused a bit of stirring among fans since a few weeks ago the song “Wildest Dreams,” from her “1989” album, trended on TikTok, which prompted Swift to release her version of the song. Will the “Enchanted” popularity give fans a new single? Or even a new album? Only time will tell since Swift is cryptic and secretive about her future plans.

“Red” has always been a fan favorite album, and Swift has openly spoken about how influential “Red” was to her life and career. The album’s haunting ballads of heartbreak were gifts of acknowledgement to Swift fans going through similar experiences, particularly in relation to ballad, “All Too Well.. The track retells the painful history between Swift and ex-boyfriend, Jake Gyllenhaal, whose relationship is known for being one of her most tumultuous. The originally released version of this song ran for five minutes and 28 seconds, but Swift released the originally written version that lasts over ten minutes. On top of that, Swift directed a short film for the track starring Dylan O’Brien and Sadie Sink.

The album itself features 30 tracks, with 10 never-before-released songs. Naturally, original singles like “22” and “I Knew You Were Trouble” retain their high energy, pop vibe that had fans falling in love with Swift’s versatility and creativity. Vault tracks like “Forever Winter” and “Message in a Bottle” showcase the beautiful lyricism that Swift is known for. The album also features a fresh duet with a rising star in the music industry, Phoebe Bridgers. Their song,

“Nothing New” has been extremely well received with fans, as it again builds on Swift’s deeply emotional discography.

Despite a lot of the fun pop tracks that “Red” shares with fans, many of Swift’s most heartbreaking tracks of her career are found on this album. Songs like “Sad, Beautiful, Tragic” and “Begin Again,” with vivid story-telling and her mature tone, makes the music even more moving than the original versions. Rock-sounding tracks like “State of Grace” and “Holy Ground” represent a special type of song done by Swift that fans refer to as “Angry Taylor” and add to the complex emotions expressed in the album. In general, the power and influence of the original album pervades into the re-recording and gives a new sense of growth as Swift shares these stories with the world once again.

It’s been almost 10 years since fans were first graced with the artistry that Swift shares on “Red.” But the re-recording maintains the power of her words and emotions that lured in fans in 2012 and keeps them coming back in 2021. The next few months will continue to keep fans on their toes as Swift’s release schedule remains a mystery, but what is not is the love of music that Swift and her fans share and know all too well.