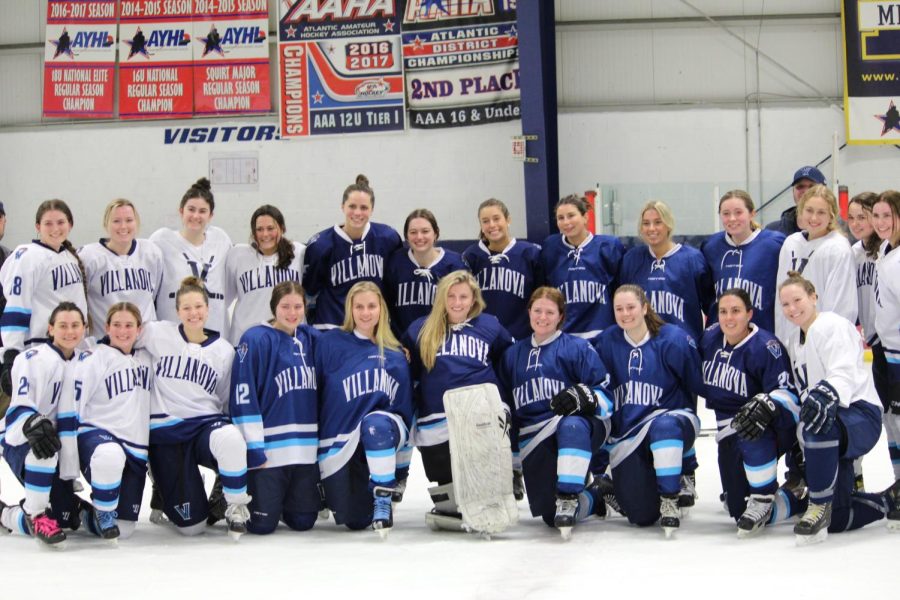 Rick Harrison in Pawn Stars said “you never know what is gonna come through the door.” The ability of the women’s club ice hockey team at Villanova to bring in women from all areas and skill levels and gel as a team is a powerful factor in its success this past season and led to many accomplishments like qualifying for the ACHA Nationals.

An example of this unification from differing experience levels is junior forwards Sara Barshap, who only had experience in figure skating, and Grace Curran, who has played hockey extremely competitively in high school.

A strength of the team is the ability to bring in women who do not have as much experience, make them comfortable and raise their game to the next level.

“Honestly, I never really felt uncomfortable or anything like that because of the environment and the chemistry that the team has,” Barshap said.

This ease of incorporation starts with the friendly and welcoming atmosphere the team sets. This comfort is set for all players during the drills.

“We definitely start off every practice with easy, simple drills, just, like, skating,” Curran said. “We don’t really get pucks involved right away. We gradually introduce pucks and passing, and you can select who you pass with.”

The cohesiveness of the team was evident in the first few practices as older players mentored the more novice players.

“Some of those drills, I had never done before,” Barshap said. “A lot of the seniors and upperclassmen, they were so good with explaining everything to me.”

The success of this ever-changing puzzle of new women on the team is the steadiness of the seniors. The seniors have the most experience, and this helps the other players who may not have as much experience.

“I feel like constructive criticism and any kind of advice is always so appreciated by everyone,” Barshap said.

Even when the coaches could not make it, due to family commitments or work, the seniors ran the practice.

“They [seniors] also do demonstrations,” Curran said. “So everyone knows exactly how to do it and what to do, so you can’t really mess it up,”

An example of a player who took a role of a coach in senior leadership was Sami Pulley, who was in the Villanova Law School and played women’s ice hockey at Boston University, a Division I program. Pulley would run drills, give advice based on what she learned in her time at BU and was a role model for the younger players.

The loss to Rowan made Villanova fearful it would not qualify for Nationals because the top 4 teams in each region made Nationals. A win against Rowan would have secured the fourth seed in the Southeast Region. However, Villanova got the invitation as the for Nationals in the region, despite finishing as the fifth seed.

“Rowan’s one of our bigger rivals, where they’re really good, and we know we can beat them, and they usually do beat us by a few points,” Curran said.

This earned the team a trip to St. Louis, but as a club team, there isn’t a charter plane or a send-off like other teams get. This team was forced to fundraise, and some players were still unable to make it, but the rest of the group leaned on passion to perform the best it could.

The strength of the team was its defense this past season. The defense formed the model of how the team sacrificed for each other, but due to a lack of funding and scheduling conflicts, the team only carried two defensemen to Nationals.

“The defense is really solid,” Curran said. “Everyone who is a defender is a really good skilled player, and they’re strong, and they hold the blue lines.”

For success to continue next season, the team must carry on the legacy of the departing seniors and use its experience from Nationals to beat the tougher teams on its schedule.