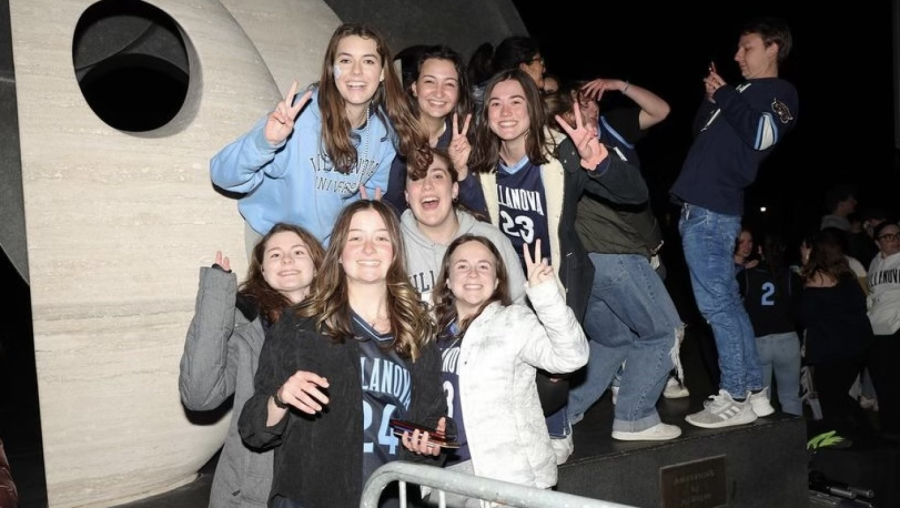 Students celebrated the Elite Eight win at the Oreo.

The ‘Cats faced a tough loss in New Orleans this Saturday against Kansas, who went on to win the National Championship. Celebration plans might not have come to fruition this past Saturday, but Villanova students did not fail to celebrate the men’s basketball team’s advancement to the NCAA Final Four on Saturday, March 26. At the final buzzer, Jay Wright and the team secured a spot in the semi-finals over Houston. The celebration immediately began as students ran out of their dorms towards the action on Main Campus.

Sophomore Gavin Woodin described his experience as he and a group of friends ran out from the quad to join in the celebration.

“Everyone was running around in the quad, doors kept opening and closing with people screaming about the game, and everyone was in the stairs going out to the Oreo,” Woodin said. “It was really awesome to see everyone get so excited to support Nova and see how regardless of who you knew there, we were all celebrating the same thing.”

The celebration certainly did not disappoint. A DJ played fan-favorite pump up songs, lights flashed blue and white and food trucks lined the perimeter of the Oreo. Students flooded the center of campus from all different directions to celebrate the victory, cheering and screaming their favorite songs the whole night with their Vs in the air.

First-year student Michael Lavin spoke about attending the celebration and what the win meant to him.

“It was electric,” Lavin said. “For a couple hours, everyone was able to forget about any stress, assignments or problems. We were simply living in the moment. Dancing, eating, singing, but most importantly, united.”

Unity was a common theme that night as students came together to celebrate and support our team. The “madness” on Main certified that there is one thing Villanova certainly does not lack: school spirit. Between Hoops Mania, themed games, game watches and after parties, Villanova students never fail to rally behind athletes and show their support.

Sophomore Arthur Byrns also attended the celebration at the Oreo on Saturday, March 26th, and expressed how he felt after the Wildcats advanced to the Final Four.

“After the game on Saturday, I was honestly in shock,” Byrns said. “People don’t realize how awesome it is to cheer for Villanova and watch them succeed after seeing them put in so much work all season long,” Byrns said. “Everyone coming together at the Oreo after the game was amazing. It was surreal to see the whole campus come together and celebrate a great win.”

Sophomore Jennifer McMahon attended the campus game watch in the Villanova Room and agreed that the energy, spirit and support for our team was amazing to see firsthand.

“It is always great to see a large turnout for a game watch and see everyone filled with energy and hope,” McMahon said. “It feels like you are watching the game with your closest friends. I personally feel the most connected to Villanova during the games, and I feel a lot of pride for my school. Villanova really has a unique camaraderie, it doesn’t matter if you know the person next to you or not because you all share the love for Villanova basketball.”

That love is especially radiant this time of the year. Whether someone knows statistics for every team in the tournament or built a bracket based on team colors, March Madness is an opportunity for students to come together in a friendly competition and celebrate the chance of a lifetime. Villanova students have watched the Wildcats start as one of 64 teams and become one of four, a feat that only a small population of students across the country have the chance to witness.

“During the game, everyone’s eyes are glued to the screen and the tension and excitement are palpable,” McMahon said. “Every time we would make a basket, the room would erupt with screams of joy. When we finally won, the room exploded with energy. Everyone was hugging and screaming. It honestly felt like a dream come true. I loved being able to celebrate Villanova in the perfect combination of pure excitement and chaos.”

That excitement and chaos is something Villanova fans never fail to deliver. Reminiscing on the celebrations from the Elite Eight is one way for students to get over the sad Final Four loss. Despite the defeat, the Wildcats continue to have one of the most loyal fanbases in the country.