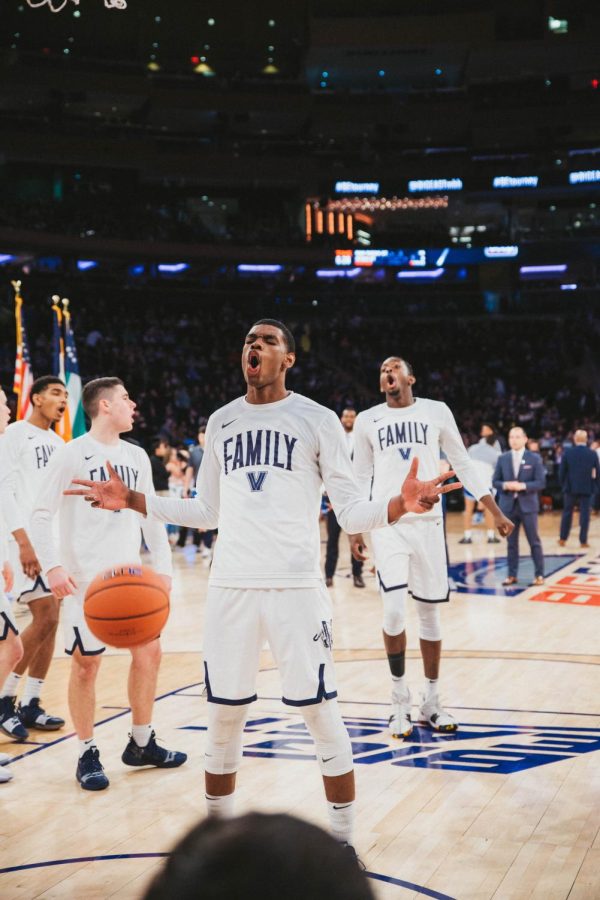 Brandon Slater, shown as a sophomore, is now the only played remaining from a talented 2018 recruiting class.

From the gym at Paul VI Catholic in Fairfax, Virginia, to the Finneran Pavilion in Villanova, Pennsylvania, Brandon Slater has gone from key recruit in a top-10 class, to bench warmer as an underclassman, to key rotation player as a senior. In other words, the forward from the DMV has seen it all.

The 53rd ranked player by 247Sports.com in the class of 2018 out of high school, Slater was an athletic four-star wing who had his choice of colleges. Louisville, Maryland, Miami and Virginia were just some of the top-tier basketball schools who had interest in the forward who could get it done on both ends of the floor, but he ended up committing to Jay Wright and the Villanova Wildcats.

‘At the time,’ being the key words. Slater has seen his fair share of turnover while at Villanova, and the assistant coaches are just one example. “[Former Associate Head Coach] Baker [Dunleavy] was actually the person who recruited me,” said Slater.

Dunleavy, Ashley Howard and Kyle Neptune were the assistant coaches during Slater’s freshman and sophomore years of high school, the prime time for relationship building in recruiting. Now, they all hold head coaching positions elsewhere in Division I basketball.

Some athletes might be perturbed by the changeover, but Slater embraced it. “It’s great to see coaches move up the ranks. It was hard to see somebody you built a relationship with go, but it was great because you had George Halcovage, Mike Nardi, who played here and Dwyane Anderson, who played here,” Slater said. “They stepped in because they’ve been in the program, they know what it’s like. It just felt like one in the same.”

Despite the change in the coaching staff, Slater arrived on campus in the fall of 2018 to a team fresh off of a national championship and was ready to contribute. “Everybody when they come in, they want to play as a freshman,” said Slater.

That wouldn’t be the case for Slater, however, as he appeared in just 15 of the Wildcats 36 games during the 2018-19 season, and averaged just 3.5 minutes in those brief appearances he did have. Effectively, he didn’t have a role. “Me not playing my freshman year didn’t really phase me much because I knew I had to get better as a basketball player in all aspects of the game. We won a Big East championship, and I was as excited as anybody else just to be out there. I got better each day,” Slater said.

Fast forward to year two for the Virginia native, and Slater definitely saw an improved role, but still not a large one. He appeared in all 31 of Villanova’s games and averaged 11.6 minutes, but never scored in double digits and was mainly responsible for playing solid defense. That team finished 24-7, but never got a chance to play in the Big East or NCAA Tournament due to COVID-19. “That one stunk,” Slater said. “That team, we felt like we were a special group. We had fun playing, we loved each other.”

In today’s environment and with the ease of transferring, many players would have left after barely averaging double digit minutes through two seasons. Why didn’t Slater?

Sticking around paid off, as Slater’s junior season last year saw an even larger jump. He appeared in all 25 of the Wildcats games, starting in two, and averaged 16.8 minutes per game while averaging 3.8 points. “All the working from the first two years, from the trials and tribulations of getting better as a college player,” Slater said about his jump in year three. “It’ll come. You can’t really rush your process, and not everybody’s process is the same and I had to understand that at an early time.”

Maybe most importantly, he went 10-24 (41.7%) from three-point territory. While still not a large volume, it amounted to about one three point attempt per game, and to date is the most attempts and makes of his Villanova career.

“We want to be able to have a whole bunch of guys who can shoot. For me, it’s important for me to learn and be able to understand which shots are the right shots and keep working on my jumper. I’m really confident right now,” Slater said about his three point shooting. “Practicing over and over again in the summer. Coaches getting mad at me because I’m not shooting the ball when I should, little things like that, just reps and repetition, that’s really all it is.”

Also notable is that he made progress on offense while also being one of the Wildcats best defenders. “It’s a mindset. I wasn’t totally defensive minded when I came from high school because I was pretty good offensively and I was athletic so I could make plays off of my athleticism,” said Slater. “I always was a little bit ahead of the curve defensively because I was more agile than the taller players and I was longer than the smaller players. It was kind of just a God given ability but you still have to work on it everyday and when I got here I just built on what I already had. I just learned different details and I really like getting a stop on players. It gets my teammates going, it gets me going.”

Now a senior, the changes that Slater has gone through while at Villanova stand out again. The 2018 recruiting class Slater was a member of had four commits and was ranked ninth overall in 247Sports Composite class rankings. Today, when those same 2018 recruits are entering their senior seasons, Slater is the only member remaining at Villanova. Guard Jahvon Quinerly transferred to Alabama after one drama-filled year. Wing Saddiq Bey left to go to the NBA after two years and was drafted in the first round. Cole Swider transferred to Syracuse after his junior year due to the return of Jermaine Samuels, leaving only Slater with the team.

“Coming into my senior year, I felt like, ‘Wow.’ Just thinking about all the stuff I’ve been through and the only person I’ve been through it with is basically myself,” Slater said of the changes he’s seen. “I’m just excited that I even have the opportunity to be here as a senior to show how I’ve gotten better and to show what I’ve gone through.”

On the court in his senior year, Slater will undoubtedly have his largest role yet. Collin Gillespie, Jermaine Samuels and Justin Moore all return as definitive starters, as does Caleb Daniels. If Eric Dixon starts as the big man in place of Jeremiah Robinson-Earl from last season, it’s possible that Slater will take Daniels spot in the starting lineup. It’s also possible that Wright decides to start a small lineup and have Slater be the de facto center. Regardless, even if Slater comes off the bench, those six players will be the top six in the rotation and see the majority of minutes. Bryan Antoine and the young players will fill out the rotation, but Slater is effectively guaranteed to have a major role in his senior season.

“Personally, I just want to be a more complete player. I want to be the best I can be. I want to do everything for my team,” Slater said on his goals this season. “We have a very talented team, we have a very veteran group of players. I think we can be a very, very special team.”

Despite being his senior year and being set to graduate this spring, Slater and all other winter athletes have an extra year of eligibility due to COVID-19. That’s not on Slater’s radar just yet, however. “I’ll focus on that when this season’s over. Right now I’m just worried about this year.”

This Villanova team is yet another squad that comes into a season with national title aspirations. Ranked fourth in the nation, they have a real shot at winning the program’s fourth national championship, and the third for Wright. To do that, the top of the rotation, which will include Slater, has to be special. Brandon Slater has a chance to become a legendary Villanova basketball player this season.