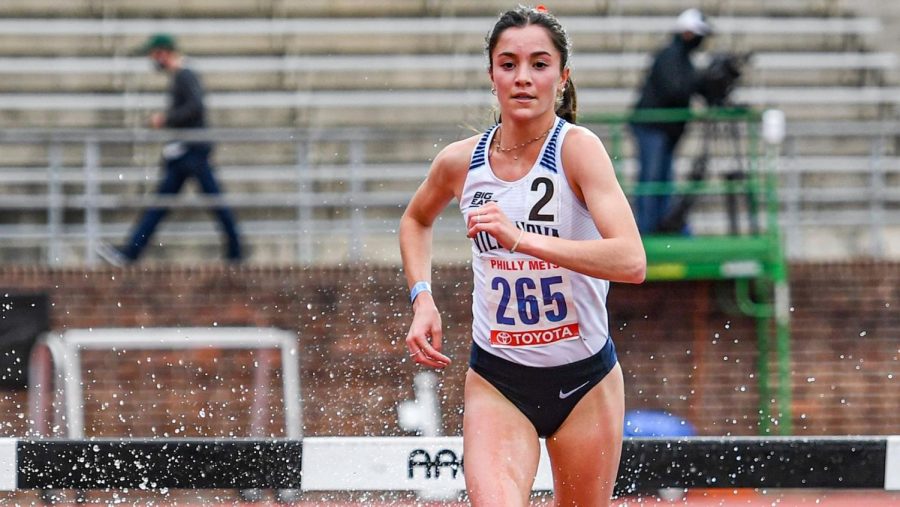 Lydia Olivere placed second in the 3000 meter steeplechase in Raleigh.

The Villanova women’s track and field team traveled south and competed in the Texas and Raleigh Relays. Over the four-day competitions, the team showed outstanding success in a variety of events.

The weekend was marked as a season opener for many athletes.

“There are a lot of freshmen in the group, so this was their first big meet to really see what it’s like racing the good college competition,” head coach Gina Procaccio said.

To kick off the weekend in Texas, graduate thrower Sade Meeks broke her third school record within the past three months. She added to her extensive list of accomplishments when she broke the 20 year record with a mark of 55.60 meters in the hammer throw. Meeks earned 10th place among the rest of the competitors. She now has the title of being the all-time program record holder in the shot put, the weight throw and the hammer throw. This performance moves her up to second place on the Big East performance list for this outdoor season.

“[Meeks] is somebody we are looking at to qualify for the NCAA Championship and… to finish among the top of the Big East rankings,” Procaccio said. “So, she is just living up to what we had expected.”

Continuing this successful weekend, senior Lydia Olivere placed second out of 38 runners in the 3000 meter steeplechase, with a time of 10:01.65. Following close behind her was teammate junior Anna Helwigh, who finished in third with a personal best of 10:04.14, putting her in third place. Olivere’s performance puts her third in the all-time fastest performance in Villanova history, along with Helwigh, who sits in sixth place overall.

“Veterans like Lydia Olivere and Anna Hewligh went out and established themselves in their signature event, and with them we were looking to get regional qualifying standards, and they came away from the weekend with number one [and] number two times in the nation,” Procaccio said.

Graduate middle distance runner McKenna Keegan continues to show her intensity and versatility as an athlete through her first collegiate performance in the 1500 meter race. She finished with an impressive time of 4:18.94, which is now the Big East-leading mark in this event.

“[Keegan has] always wanted to run [in the 1500],” Procaccio said. “She is such a competitor and…is always competing for the win. She ended up running one of the top times in the nation and in the Big East [for] her first time ever running in the event.”

Junior sprinter Jane Livingston competed in the hurdles event for the time this season and finished with a time of 14.02.

Four Wildcats competed in the 400 meters, with junior Madison Martinez leading the team with a time of 57.19. Freshman Maya Dorer crossed the finish line in 58.90, and freshman Alex Stasichin followed close behind with a time of 59.70.

Back in Texas, graduate thrower Taryn Ashby competed in the javelin to begin her season and threw a distance of 43.70 in the A section. She placed 12th among some of the top javelin throwers in the country.

Senior sprinter and jumper Trinity Hart recorded a mark of 5.41 meters in the long jump during her second attempt.

This week, the Wildcats will compete in the Pepsi Florida Relays from Thursday to Saturday and will also have some athletes compete in the Philadelphia Big 5 Meet on Saturday.