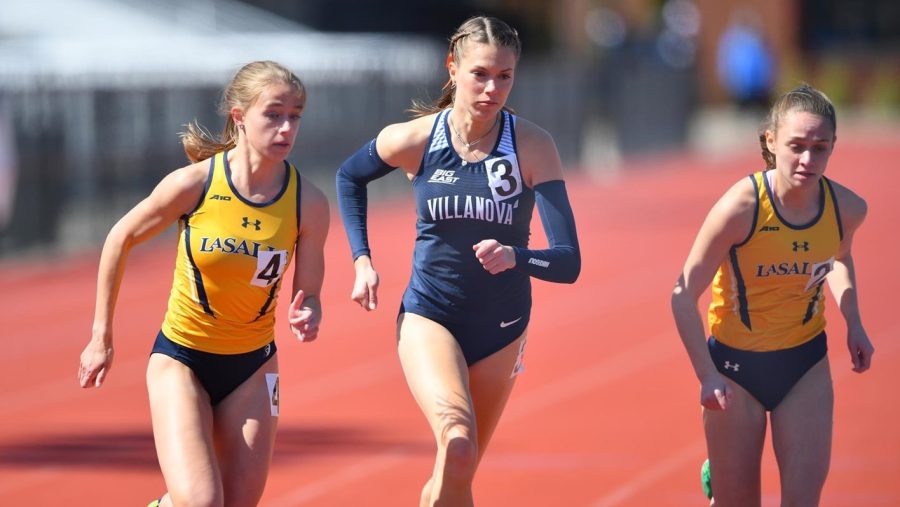 This weekend, Villanova’s women’s track and field opened its outdoor season at the Penn Challenge. After transitioning from the indoor season, where the team suffered a few unfortunate losses as some athletes struggled through injuries, head coach Gina Procaccio stated that “we were just looking to start the outdoor season with a bang.” And that is exactly what the Wildcats accomplished, earning three first place finishes.

This meet marked the official transition from the indoor to outdoor season.

“After the indoor season, we took a little break, then [we] got back into some decent training,” Procaccio said. “[We] are looking to compete tough on tired legs [since] we are in the middle of a build-up training block.”

Opening this successful weekend, graduate student Sade Meeks carried her skills into the new season and earned first place in the shot put event, with a throw of 14.74 meters. Meeks’ name appears in the record books once again with this performance, becoming the third-longest outdoor throw in Villanova history. During her indoor season, she set the longest throw overall in school history, becoming the only athlete to throw more than 15 meters. On the school’s all-time top 10 marks in the shot put, Meeks’ throw this weekend is eighth in school history. Meeks also competed in the hammer throw and earned a mark of 52.20 meters, which landed her a spot in ninth place in Villanova’s all-time record book.

Similarly, senior teammate Emily Galvin competed in the hammer throw, also finishing in the top-three. She earned third place, with a mark of 52.36 meters, setting an all-time personal best and putting her seventh on the Wildcat’s top 10 marks list.

Galvin now holds the second place spot in the hammer throw in school history right behind record holder Melinda Boykin, who threw a mark of 55.13 meters from her time competing in the 2001 season. Meeks performance puts her in third place on the same list.

Speaking on behalf of Meeks’ and Galvin’s dual performance, Procaccio stated that “there is definitely a comfort when you have a teammate in your event.”

Junior Anna Helwigh earned first place out of 16 competitors in the 1500 meters, with a time of 4:22.73. In the 1500 meter event, Villanova secured the top four spots. Senior Lydia Olivere finished second in 4:22.73, junior Madison Martinez placed third in 4:30.08 and freshman Emma McGill finished fourth in 4:31.07. The Wildcats also placed sixth and seventh in the same event, with freshman Maya Dorer finishing in 4:32.51 and freshman Emily Robinson in 4:36.67.

Procaccio said that this successful first outdoor meet “gave [the team] a lot of confidence to start off the season.”

Next weekend, the team heads to Raleigh Relays in North Carolina, with more than 100 different teams competing.

“[The team has one meet] under their belt, they will be more rested for [the next] one, and it gives them the confidence they need to go out and compete against some of the best runners in the country,” Procaccio said.