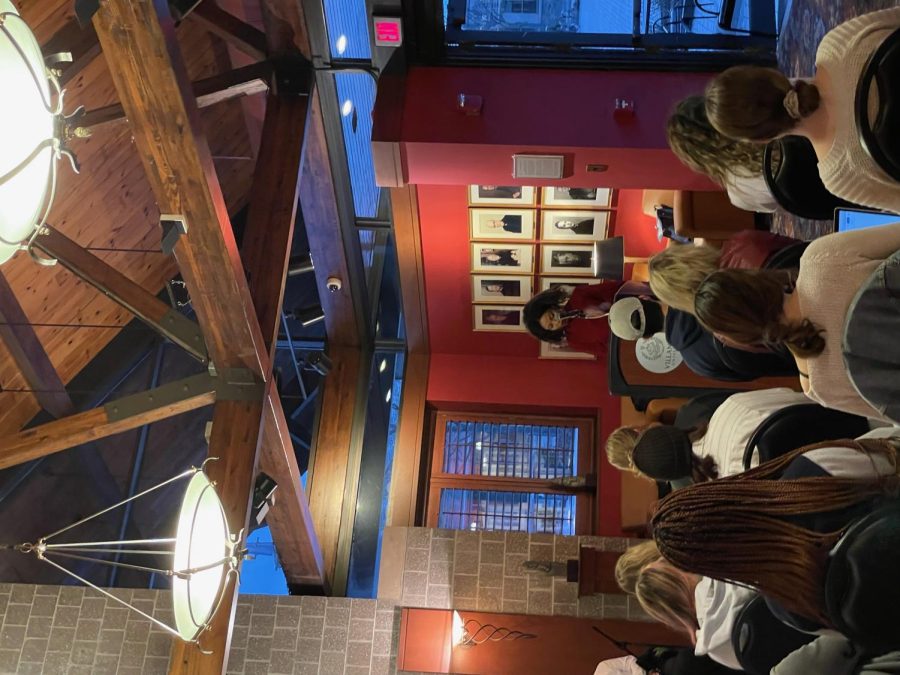 Dabiri spoke from both her novels at the Literary Festival.

The event took place on March 15 in the President’s Lounge of the Connelly Center. The literary event partnered with the Department for Irish Studies for a conglomeration of academic attendees. The evening was filled with traditional Irish music, drinks, snacks and a medley of folk both student and faculty alike.

Dabiri is the 2022 Charles A. Heimbold Jr. Chair of Irish Studies, a prestigious role.

According to Villanova’s Irish Studies website, “The Charles A. Heimbold, Jr. Chair of Irish Studies is held in the Spring semester of each academic year by a distinguished Irish writer. Inaugurated in 2000, it has become one of the most prestigious Irish Studies positions in the United States.”

Alongside that position, she teaches two courses at Villanova titled “Creative Non-Fiction for Change” and “Green and Black: Irish and Africana Literature and Culture.”

Her work expands across a multitude of communication platforms. So far, she has two published novels, “Twisted” and “What White People Can Do Next.” The former is an enriching dive into the history of Black hair culture, intertwined with Dabiri’s own journey with her hair as a young Irish person of color. “What White People Can Do Next” is a revolutionary look at race and meaningful paths for the future. Dabiri is also a respected BBC contributor via radio, YouTube and television. If that were not enough, her written work is published in a multitude of journals and anthologies, and she even received the Cannes Lion Silver Award for her Channel 4 documentary “Hair Power: Me and My Afro.” As for her future endeavors, Dabiri is soon to study Gaelic in Ireland, as well as create her own production company to help represent marginalized voices.

Dabiri currently teaches her two courses at Villanova, but the Literary Festival gave everyone a chance to hear from Dabiri herself.

“It was so great to hear Dabiri speak,” junior Jessica Laino said. “Especially in the context of the Irish Studies department.”

Dabiri read sections from both novels, interjecting commentary throughout. Her research and ideas about race and Black culture are thought provoking and undeniably captivating. Everyone in the room held onto her words.

“It was really interesting hearing all of Dabiri’s words that she read,” attendee Meghan Edwards said. “It definitely changed a lot of my thinking about the importance of Black hair culture, and it was inspiring to hear her take on issues that aren’t talked about enough.”

Dabiri is the second speaker out of a total of four set to speak as participants in the Annual Literary Festival. The festival interacts with the English course “Authors On and Off the Page,” where students read work of these respective authors before they come to the classroom for intimate question and answer sessions.

The next speaker, poet Camille Dungy, is set to speak on March 29 at 7 p.m. in the Falvey Speaker’s Corner. All are welcome.