2022 State of the Union: Left Perspective 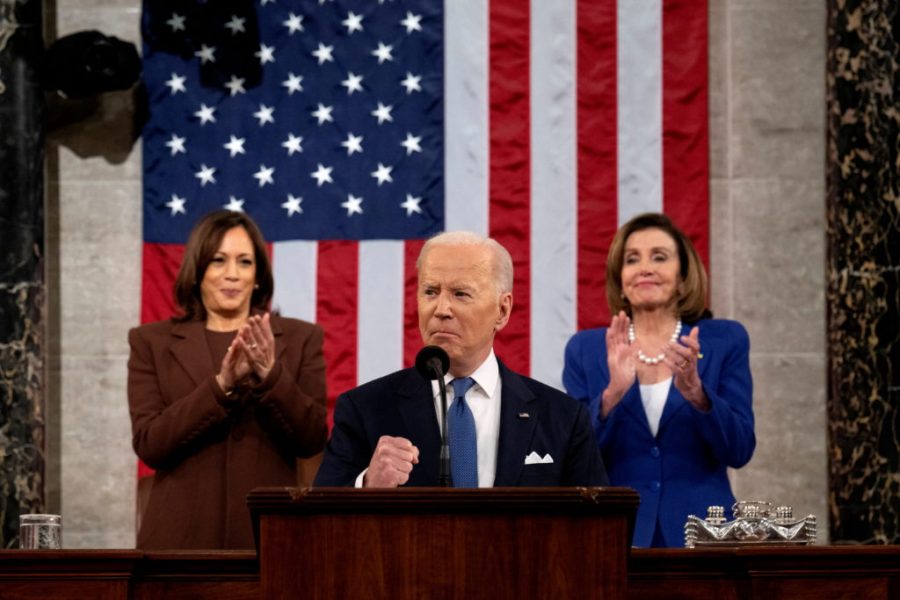 Overall, President Biden's State of the Union Address was seen as a success by many on the left.

At a time when so much instability and uncertainty pervades our world, Americans look to their president to assuage their concerns. On Mar. 1, President Joe Biden’s State of the Union Address went above and beyond in achieving this objective.

The president first focused on the Russian invasion of Ukraine. With strength and resolve, Biden sent a formidable message to the world and Russian President Vladimir Putin that the US and its allies would not tolerate Russia’s cowardly and barbaric actions.

He praised the leadership of Ukrainian president Volodymyr Zelensky and the bravery of everyday Ukrainians who took up arms to defend their homeland from Russian aggression.

Perhaps most importantly, President Biden stated that American military forces would not engage with Russia. Having just exited a long-drawn-out war in Afghanistan, the president has been successful so far in walking the line between supporting Ukraine and helping European allies counter Russia while keeping a distance from active involvement in the warfare.

Under Biden’s leadership, Putin finds himself on the losing side of this conflict.

Focusing on domestic issues, POTUS touted record-breaking GDP growth and job creation, with the economy expanding by 5.7% and overseeing the creation of 6.5 million jobs. His message on the economy echoed the same vision he promoted on the campaign trail, stressing the importance of empowering middle-class families.

Infrastructure was another key issue that proved to be a colossal win for the administration. The president discussed the importance of modernizing American infrastructure to compete with China in the 21st century.

The Biden Infrastructure Law intends to create an electric vehicle charging network across the country, repair thousands of bridges and miles of highways and replace lead pipes found in municipal water systems across the nation.

Another significant priority addressed by the president was domestic manufacturing. Given the ongoing difficulties with supply chain disruptions, Biden shared his vision for a new era in the industry. To fight inflation, he believes domestic investment will help reduce dependency on imports while lowering costs.

Seventeen Nobel Laureates in Economics have come out supporting Biden’s Build Back Better plan, which would ease long-term inflation. Highlighting a new Intel semiconductor plant opening in Ohio which will generate thousands of jobs, Biden also mentioned Ford and GM in his speech, commending them for their investments in American manufacturing.

A little more than a year into his term, Biden has accomplished much, but he appealed to Congress in the address to help pass his other legislative proposals, many of which comprised the cornerstone of his Build Back Better plan.

Among these proposals are affordable childcare and universal Pre-K, a 15% minimum tax rate on corporations, an extension of the Child Tax Credit, an end to COVID-19 shutdowns and a return to normalcy, universal background checks for firearms purchases, the passage of voting rights legislation and more.

In light of recent judicial battles on the status of abortion, the president affirmed his support for Roe v. Wade and protecting the right to choose.

On the issue of the Supreme Court, Biden fulfilled his promise by nominating a Black woman, Ketanji Brown-Jackson, to fill the retiring seat of Stephen Breyer on the Supreme Court. Biden also called on Congress to pass legislation to protect transgender Americans and women from domestic violence.

Biden closed on an optimistic note.

“We are the only nation on Earth that has always turned every crisis we have faced into an opportunity,” he said. “The only nation that can be defined by a single word: possibilities.”

Despite the chaos of current circumstances, Biden has successfully invigorated the economy, restored America’s image as a leader globally and delivered for working families through his legislative priorities.

Not only is the state of the union stronger than ever, but America is also beginning to build back better.