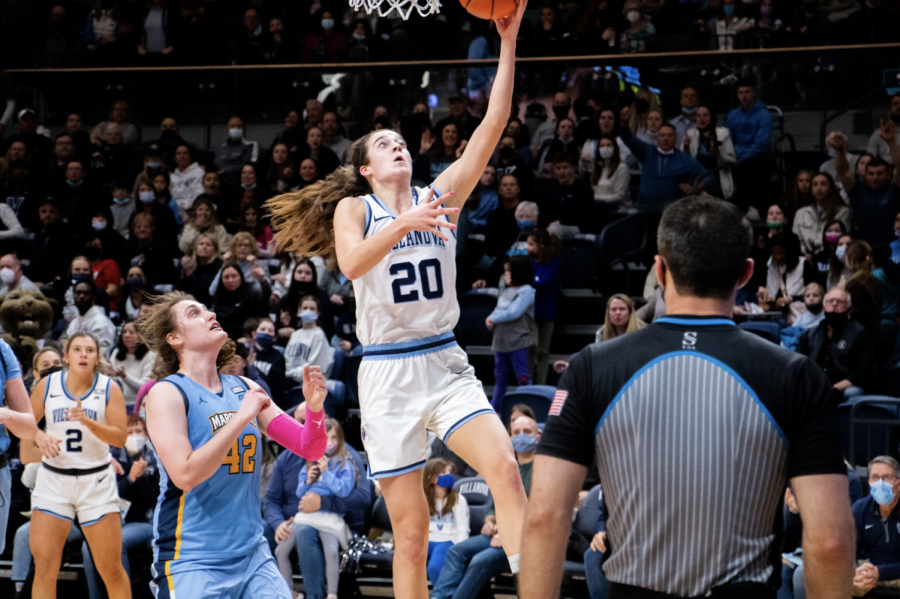 Maddy Siegrist (above) ranks second in the nation in scoring with 25.9 points per game.

Graduate guard Collin Gillespie and junior forward Maddy Siegrist were both named to the AP All-American Third Team, the Associated Press announced Tuesday and Wednesday, respectively. Gillespie and Siegrist were also both named Big East Player of the Year for the 2021-22 season prior to their respective conference tournaments, in which Siegrist led her squad to the Championship game, and Gillespie led his all the way to a conference title.

Gillespie was the leading scorer for the men’s basketball team this season, averaging 16.1 points to go along with 3.1 assists per game. Gillespie also recorded conference highs in free throw and three-point percentage, shooting 91.5% and 43.1% respectively.

Siegrist led the Big East in scoring, averaging 27.9 points per game in conference play while her overall season average of 25.9 was good enough for second place in the country. She finished the regular season with nine 30-point performances, and 12 double-doubles. Entering the season, Siegrist sat in 20th on Villanova’s all time scoring list, but with her 647 points so far this season, the junior currently ranks third with 1,778 points.

Both athletes will have the opportunity to continue to lead their teams as they enter the NCAA Tournament. The men’s team earned a two seed in the South Region and will be traveling to Pittsburgh to face No.15 Delaware in the opening round on Friday. The women secured an at-large bid and will be the 11 seed in the Wichita Region, taking on No.6 BYU in the first round on Saturday in Ann Arbor.