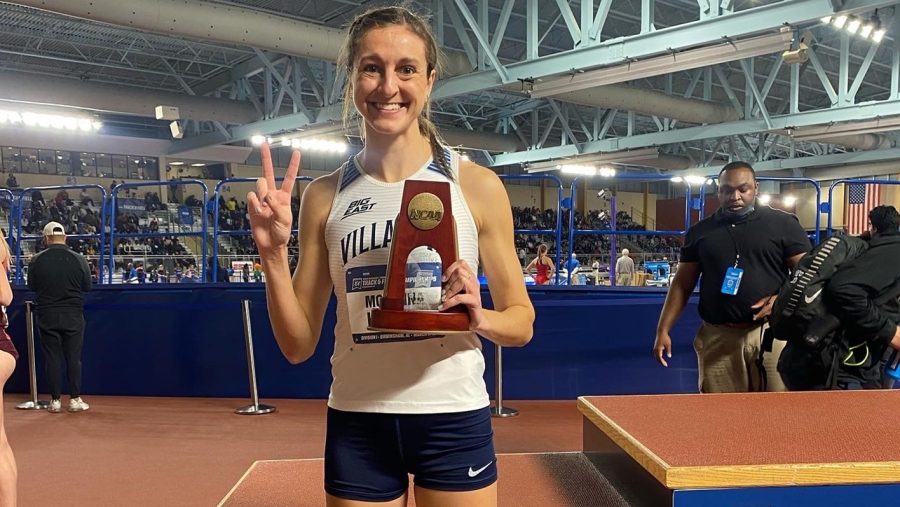 McKenna Keegan was the only Wildcat to compete in nationals, where she placed third.

Over the weekend, Villanova was represented at the 2022 NCAA Division I Indoor Championships for Track and Field by graduate student McKenna Keegan. She was joined by sophomore Sean Dolan and senior Malik Cunningham, competing for the men’s team. For the first time since 2014, Villanova had both a women’s and men’s athlete competing in the 800 meter event.

“It is such an elite group of athletes,” women’s head coach Gina Procaccio said of the accomplishment. “They only take the first 16 times in the country.”

On Friday evening, Keegan raced in the second of the two preliminary heats. She finished in third place, with a time of 2:04.00, automatically qualifying her for the finals by almost two-tenths of a second. She finished in fifth overall out of the 16 competitors, and her performance has now been recorded as the seventh-fastest indoor time in school history. Keegan is one of just two Villanova athletes to ever break 2:04.00 in the indoor 800 meter event. Keegan and her former teammate Siofra Cleirigh Buttner collectively make up the top-ten fastest times in Villanova history for the event.

On Saturday, she crossed the finish line in 2:02.70, securing the third place podium spot in the final heat, and earning her all-America honors, the sixth time she has achieved this honor in her career.

During the final lap of the race, Keegan gave it her all and passed four runners to jump from seventh to third place by the end of the race. Her name appears in the school’s record books once again as the second-fastest time for the indoor 800 meter event.

Keegan is an NCAA qualifier for the second year in a row in the 800 meters after finishing seventh a year ago, with a time of 2:04.26 in the championships that earned her first team honors. Keegan’s personal best of 2:01.25 stands third all-time in Villanova history and the top time on Villanova’s collegiate outdoor season record books when she competed in the NCAA East Preliminary rounds last year.

In early February, she made Villanova history by having the third-fastest time for the collegiate indoor season when she competed in the Husky Classic, with a mark of 2:03.48 in the indoor 800 meters event. Her name also appears on the same list as having the eighth and ninth fastest times from the indoor NCAA Championships exactly a year ago of 2:04.26 and 2:04.56, respectively.

Throughout her time competing as a Wildcat, Keegan was one of the many athletes who was affected by the COVID-19 Pandemic for two years, but she was able to overcome various obstacles and continue to be successful.

“[Keegan] is a very calming presence among the group,” Procaccio said. “She always took advantage of any opportunity that she was presented with.”

This marks Keegan’s final indoor season and last appearance at the NCAA Championship, and she left it all on the track.

“It is great to see [Keegan] elevate herself to one of the best runners in the country,” Procaccio said. “She is a great competitor. She loves the sport. She loves just sticking her nose in there and pushing herself to see how well she can do. […] She leaves it all out there.”

This being Keegan’s last year to compete, Procaccio spoke to her supportive, friendly and encouraging personality that she radiates onto her teammates both on the turf and off.

“She is a great leader,” Procaccio said. “[She] leads by example and everybody just loves seeing her do really well because she works really hard, and she is definitely a great inspiration to the rest of the team.”

Keegan’s outstanding performance gained her team six points, and Villanova finished in a  tie for 28th place out of 59 teams that scored points. Her performance made Villanova the only team from the Big East to place in the team standings.