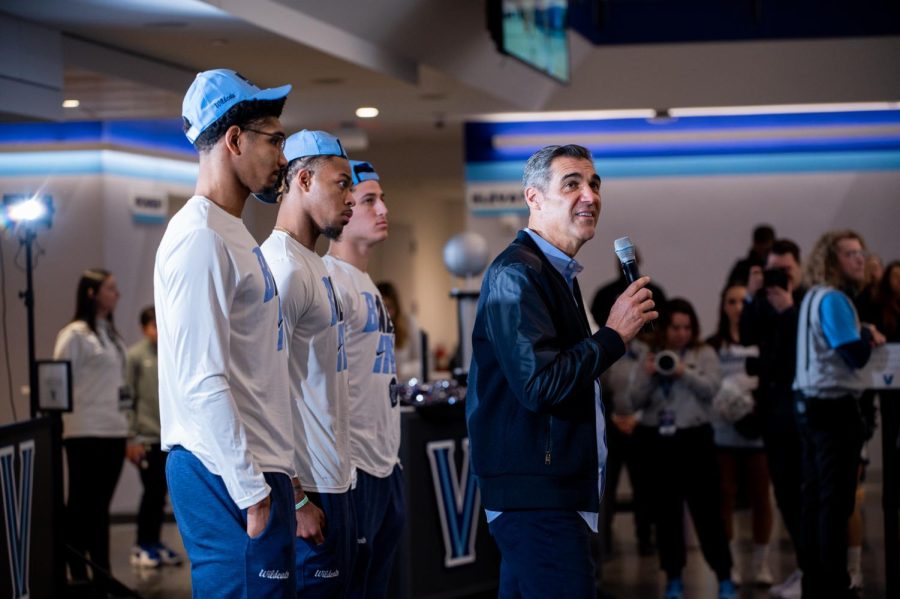 Wildcats fans everywhere are filled with excitement as the Big East tournament champions earned a crucial two seed in the South Region of the March Madness bracket. But what does Villanova have to do to win the region and, more importantly, win its first championship since 2018?

The Finneran Pavilion had mixed reactions Sunday evening as the team and fans watched the Selection Sunday special. While many had hoped to see the ‘Cats play in Philadelphia later in the tournament, shock filled the room as the team earned the two-seed in the South Region instead. However, fans should be relieved with the result, considering the number of powerhouses in the East Region that will battle it out over the next month.

Overall, the Wildcats are 9-7 against teams in the tournament. On the flip side, they are only 1-3 against teams outside of the Big East that are in the tournament. That statistic, while frightening, does not recognize the fact that after concluding this difficult stretch of non-conference games, the Wildcats had the highest strength of schedule in the country, and after a difficult Big East season, ‘Nova now ranks seventh in strength of schedule. The Wildcats have seen it all and are prepared to compete at the highest level.

Focusing on the South Region, Villanova is facing a group of teams that are ready to be the next Cinderella story, rather than a region full of Blue Bloods. While Arizona, ‘Nova and Tennessee highlight the region, teams like Loyola-Chicago, Chattanooga and Houston remain under the radar and poised to make runs.

The ‘Cats start with a matchup against rival Delaware, which feels almost as if it is the last weekend of football season. While the teams usually compete in the Battle of the Blue for the CAA gridiron championship, they will instead meet to advance to the second round. While Delaware has been on a dominant stretch at the end of the regular season, including a CAA championship win, the Blue Hens have never won an NCAA tournament game. Anything is possible in March, but considering No. 2 seeds are 135-9 against No. 15 seeds, one could expect First Lady Jill Biden’s Wildcats to defeat President Joe Biden’s Blue Hens.

Looking forward, Villanova would then face either Ohio State or Loyola-Chicago. The match between the teams is a toss-up, and ‘Nova will have to carefully prepare for either team. Loyola-Chicago, a former Cinderella, will not hold back, as it has much to prove after reaching the Sweet 16 last season. Meanwhile, Ohio State was upset by Cinderella team Oral Roberts last season and is coming off an upset loss to Penn State in the Big Ten tournament.

As for the rest of the region, much is unpredictable. While four-seed Illinois has been dominant in the Big Ten throughout the season, Chattanooga is poised to put up a fight after winning its conference title. Five-seed Houston, one of the worst free-throw shooting teams in the country, will face 12-seed UAB in a battle with a potential upset possible. Eleven seed Michigan, which many analysts are shocked by its appearance in the tournament, let alone a higher seed, will face six-seed Colorado State in a matchup where six-seeds are just 21-23 since 2010. Big East foe Seton Hall, an eight-seed, will take on nine-seed TCU in a matchup that even experts are struggling to predict.

The two games in the South that people are overlooking are the one-seed Arizona against the winner of the play-in game and three-seed Tennessee against 14-seed Longwood. There is no question that Tennessee will be highly motivated after going on a strong end-of-season run, which included an SEC Tournament championship win and being given just a three-seed. The Arizona Wildcats, a favorite in the South, will have a tough fight against Bryant if the Bulldogs can win on Wednesday against Wright State. Senior guard Peter Kiss of Bryant is the nation’s leading scorer, and the Wildcats will have to shut him down in order to move on.

If ‘Nova can keep up and dominate the South, all that is left in the way of a third championship appearance in six years is a match with the Midwest in New Orleans. The region has some familiar faces in Providence and Creighton, while also hosting powerhouses such as Kansas, Auburn and Iowa.

Under the leadership of graduate guard Collin Gillespie, the ‘Cats have the experience and poise to make a run. Combine that with head coach Jay Wright’s scheduling of tough early season games and the team’s nation-leading free-throw percentage, and ‘Nova has all of the keys to a successful March. Also, there was another time that a star point guard led a Villanova team that got left out of a chance to go to the Eastern region final in Philly as they were selected to be a two-seed in the South. That team won a pretty special trophy in 2016. Survive and advance— that is the March motto.