Yik Yak and the Dangers of Online Anonymity 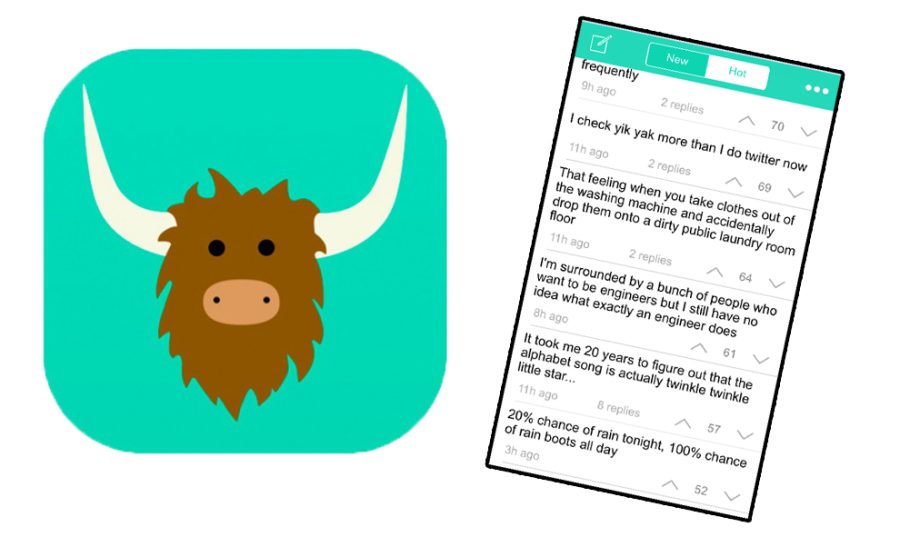 Courtesy of The Baker Orange

Yik Yak has been embraced by the Villanova community, but it has its dangers.

Many of us have become all-too-familiar with Yik Yak in the few months since it was relaunched in August of 2021, after a four-year hiatus. With a crisp user interface comprising emojis, confetti and an infamous animated yak (the app’s bovine mascot), Yik Yak offers anonymous public messaging across campuses like ‘Nova’s, theoretically giving students a harmless, playful space to exchange thoughts and gossip.

At least, that’s what Square, the company responsible for the platform’s relaunch, would have people believe. However, in practice, Yik Yak’s negative effects far outweigh its positive (or even neutral) ones.

The two features of the app that have made it so popular—locality and anonymity—are the very things that make it dangerous.

Using Yik Yak to victimize particular people or groups within the five mile radius that limits the posts is remarkably easy and consequence-free for the poster.

In fact, Yaks that have a certain shock factor or campus-wide recognizability are typically rewarded with a slew of upvotes, leading a vicious cycle of incentive and reward to constantly think up more outrageous and personal posts.

Sophomore Trevor Renfro, who had a personal run-in with Yik Yak notoriety in recent weeks, described the risks that come with the amusements of the app.

“Although I thought it was pretty funny when I was on Yik Yak, I could see that it being anonymous could turn out really badly for someone,” Renfro said.

Yik Yak’s second go-around is not the sole example of anonymous messaging being linked to bullying. Ask.fm, for example, is one such social platform founded in 2010 that reached its peak soon thereafter, touting about 65 million users globally (at least half of which were under 18) by 2013.

The website was surrounded by controversy for most of its heyday for its infamously vicious messages and nonexistent privacy controls. Its climate became so toxic that Ask.fm was linked to at least five adolescent suicides in 2013, leading to calls for the platform to redesign its hate speech and privacy policies, or to shut down altogether.

Although the models of Ask.fm and Yik Yak are different, with the former operating as more of a direct messaging program and the latter as more akin to a virtual bulletin board, their shared anonymity makes them equally prone to hate speech and targeting.

Indeed, Yik Yak’s hiatus until last August was not without reason. Unsurprisingly, the app originally shut down in 2017, unable to recover from its reputation as a breeding ground for cyberbullying and harassment. Its creators made the decision to sell the app’s intellectual property after schools across the United States began banning the app, making its popularity plummet.

With the relaunch, Square did acknowledge Yik Yak’s troubling past and vowed to adopt a stricter, zero tolerance policy toward bullying on the platform. To realize this goal, the developers added a requirement to attach a phone number to accounts and a sidebar with mental health resources, harassment warnings and encouragement to downvote instances of bullying.

While these efforts to limit targeting and other negative conduct are a step in the right direction, apps like Yik Yak will never be safe from dangerous behaviors, ranging from annoying to legitimately life-threatening. Such risks are inextricably linked to anonymity, further compounded by the more personal, local nature of Yik Yak’s limited location feature and ability to hide behind a screen. Moreover, the sheer number of users makes reliable oversight unrealistic.

This semester alone, there has been no shortage of misinformation and victimizing messages shared and promoted on Villanova’s Yik Yak, and while consequences may not be felt by those who write or upvote the posts, the same cannot be said for those they target.

Anonymity brings an exciting sense of mystery to platforms like Yik Yak. But it also strips users of any personal accountability—legally, ethically or otherwise. It’s time to face that there is a line between convenient amusement and complete moral ambiguity, and Yik Yak falls on the wrong side of the line.