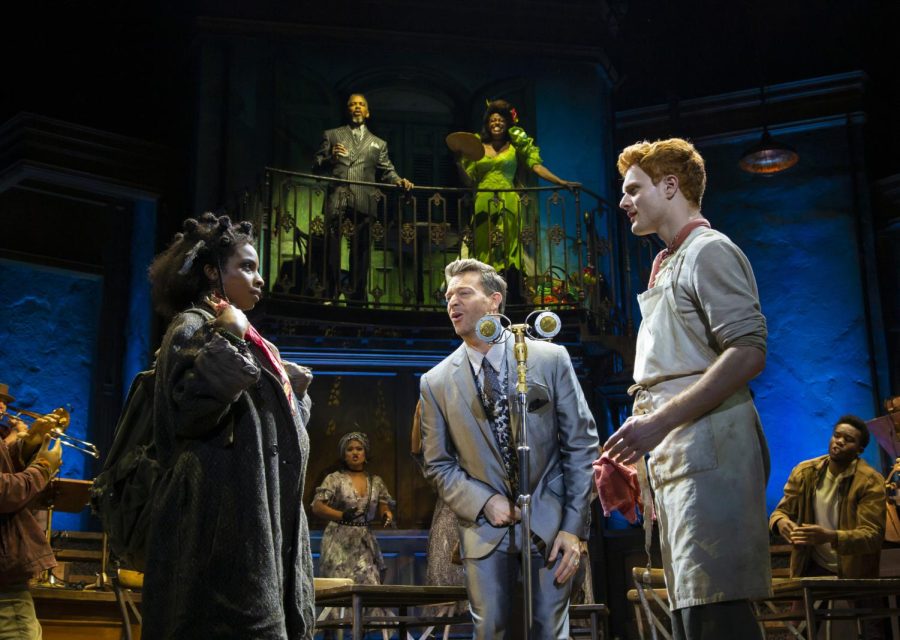 Hadestown, the touring Tony Award winning musical, took root in Philadelphia with a run from Feb. 9 to Feb. 20. Written by singer-songwriter Anaïs Mitchell, the musical’s bluesy melodies blended sound and story for a re-telling of an ancient Greek myth.

The story follows the two couples of Eurydice and Orpheus and Hades and Persephone. The central plot follows Orpheus’s song writing journey and his desire to finish a melody that will bring back the lost season of Spring. When he meets Eurydice, a “hungry young girl” who is “no stranger to the world/No stranger to the wind,” the two fall instantly in love and become two young lovers against the harsh world.

Persephone and Hades are an older pair who have misplaced their love for one another. Persephone, goddess of agriculture, must spend half her time in the Underworld with Hades and half above ground to take care of the earth. This creates the seasons and the symbolism of a somewhat ambiguously troubling relationship between the goddess and Hades.

To Hell and back again, the couples navigate the trials of love and the ways of the harsh magical world, trying to make it through the troubling winds in order to find ways back to each other.

The musical’s main themes center around relationships and the deep complications of love both for oneself and others, but the performance is even more multi-layered. Touching on current issues like climate change, immigration and capitalism, many topics are covered within the span of the two-and-a-half-hour show. Different characters represent these issues in different ways. For example, Hades’ character is an oil-tycoon, and his underworld is like one big factory, to the dismay of Persephone, who describes the effects of his business: “It ain’t right, and it ain’t natural.”

In this re-telling, Hadestown puts the classic characters in a 1920s New Orleans-esque setting, utilizing the bluesy, folksy jazz music of the time. The effect of the musical stylings, full of scatting, layers of trombone and violin solos and laced with a bit of rock, is a transcending phenomenon that manages to make an ancient story feel wise with age, like a period piece and an effortlessly modern story simultaneously.

Through bridging the ancient and modern, using a middle period’s culture as a means to do so, Hadestown is an ode to the ways in which, despite time and for better or worse, some things never change.

Orpheus, played by Nicholas Barasch, graced the stage with whimsical falsettos, depicting Orpheus’s innocent perception of the world and making the audience automatically root for him and his airy aura. Juxtaposed to him was Hades, played by Kevyn Morrow, whose bass range embodied the dark intricacies that come with being king of the underworld.

Another component of the musicality of the performance was the presence of the orchestra on the stage itself. Sitting on raised platforms, the musicians were performers in themselves, making the music fill the venue with atmospheric pressure.

As for the physical layout of the performance, the use of a rotating stage, often depicting the hero’s journey or the cycle of relationships constantly at odds, heightens the immersive experience. The same goes for the lighting, with giant stage lights lining the back wall of the stage that often lights the actors up with a ghostly glow, haunting audience members.

Upon watching the re-telling with all these components, what truly stood out was the profound lyricism found in the songs themselves. Never was there a lapse in the intricate slant rhymes or proverbial sentients that moved the story along on enrapturing currents. Specifically, Act Two’s “Doubt Comes In” felt like a pinnacle of the show’s astounding lyricism. It is the mount of the show’s musical intensity, with layers of characters’ voices that build to a vital moment in the show, reaching that point through overwhelmingly poetic verses.

At the end of the show, one could see many audience members visibly impacted by the performance. Walking out of the Kimmel Cultural Campus, it felt as though each person had undertaken the journey of the complex characters to Hell and back. After all, we all experience some journey to the self or to another in our own way, which is something the show was able to take hold of and formulate into an experience like no other.

If there ever comes a time to witness this show, let it be known, it will stay with you long after the curtain closes on the underworld.