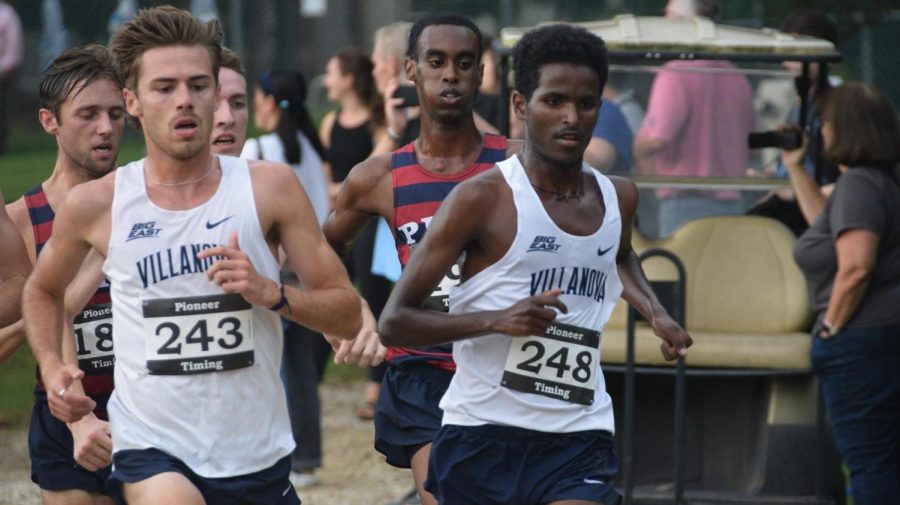 The track and field Big East Championships are scheduled for Feb. 25 and 26 in Chicago. The Villanova men’s team used its final weekend of regular season competition to continue its steady improvement and prepare for a strong performance.

The Wildcats were spread out over three different meets this past weekend, with groups competing at the Rutgers Open, the Indoor Music City Challenge at Vanderbilt University and the Tiger Paw Invite at Clemson University.

Junior middle distance runner Sean Dolan continued his pursuit of the all-time record for Villanova in the mile. Dolan commented last week that he was eyeing up the school record in the mile, and he consistently approaches it with better times each week.

Dolan competed in the Indoor Music City Challenge on Friday and set a new personal best by more than eight tenths of a second, with a time of 3:56.39. This is Dolan’s second straight race breaking the four minute barrier, and he currently ranks second in the Big East standings for the indoor mile, behind Georgetown’s Mattew Payamps’s time of 3:55.53.

“I think he’s on the cusp of it (Payamps’s 3:55.53),” Villanova head coach Marcus O’Sullivan said. “He’s been training really hard. I definitely think that school record (3:48.83) is on the brink of him getting it. What I’m saying is he’s still running a little heavy legged, and he’s still pulling out PRs, personal records, from week to week.”

Senior distance runner Charlie O’Donovan, who ranks third in the Big East standings for the indoor mile, ran a time of 3:58.17 in the same mile race as Dolan. This posted time is the second fastest of his career, with the fastest coming at Penn State two weeks ago.

After recording a personal best of 15.79 meters last week, senior triple jumper Malik Cunningham raised his personal best to 16.12 meters on Saturday at the Tiger Paw Invite. He is now second all-time on Villanova’s performance list in the triple jump.

“He’s been jumping really well,” O’Sullivan said. “He’s just been fouling, which means he’s not hitting the board right. So, he was at Clemson this weekend with Coach Anthony, and that was a big jump, really big jump.”

Graduate thrower Riley LaRiviere recorded a personal best throw of 16.75 meters on his final attempt in the college section of the weight throw.

“Leaving Lehigh and coming down to us (was) just a natural transition, a natural progression for him, and I just think he was very confident first throw out,” O’Sullivan said.

In other running events, junior Haftu Strintzos ran in the fastest section of the 5000 meters and posted a time of 13:50.42, placing him in fifth in the Big East indoor standings. Junior Mac Costonis posted a personal best time of 50.27 in the 400 meters.

At the Rutgers Open on Saturday, senior Richie Bush ran a 22.35 in the 200 meter dash, and sophomore Nicholas Mollica followed close behind with a personal best time of 22.70.

In another middle distance event in the 800 meters, sophomore Chris Weeks lowered his personal best by more than seven tenths of a second, posting a time of 1:55.66. His previous personal best was a 1:56.37 in high school.

“Chris’s coming off of an injury all fall,” O’Sullivan said. “He’s been in the pool swimming. He’s a pretty decent swimmer, so at the end of the day, I think that was a good sign for him.”

Weeks originally ran a 1500 meter race last year as an unattached runner, but he was dropped down to the 1000 meter and 800 meter races.

“As it turns out, he’s got a little more speed than we thought,” O’Sullivan said. “He seemed to be a bit more comfortable in it.”

Phillips benefitted nicely from a needed break in his native Australia, which gave him a sense of urgency once he came back to train.

“In that momentum that was created from being behind, he pushed on through the workouts, and all of a sudden, got the PR and another PR,” O’Sullivan said. “It goes to show sometimes the rest does pay off when it’s timely.”

The Wildcats will be contenders for the top spot in the team competition of the Big East Championships in two weeks, but they will face tough opposition from UConn and Georgetown. Some top contending events to watch out for will be Cunningham in the triple jump, Dolan in the 800 meters, Dolan and Charlie O’Donovan in the mile and Phillips and Strintzos in the 3000 meters.