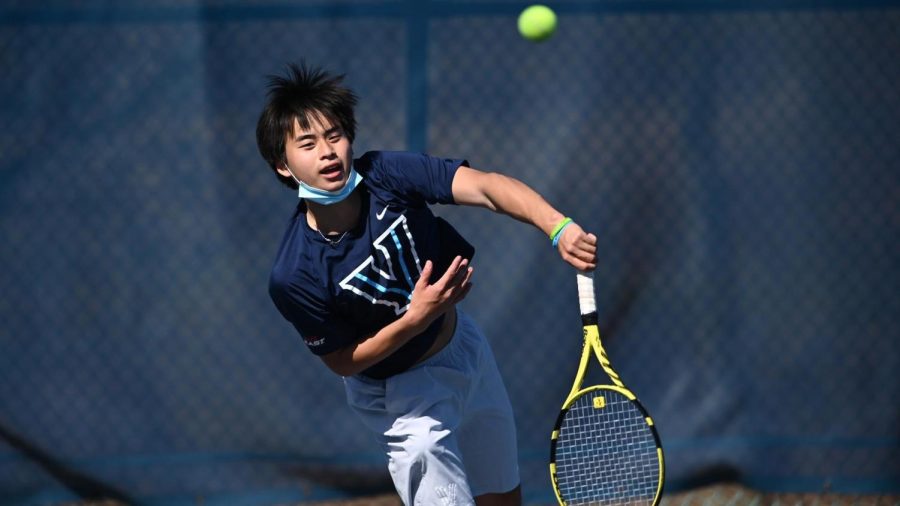 Led by four singles victories, Villanova men’s tennis kicked off its season with a 4-3 comeback win over Jefferson on Friday night.

The doubles partnership of junior Justin Suarez and sophomore Anthony Prokurat dropped the first set of the match in a 6-1 decision. The duo has match experience from the previous season. However, head coach Brad Adams recognizes the possible variance of the doubles lineup moving forward.

“It’s definitely fluid,” Adams said about his #3 team. “They’re currently our best option, and I have confidence they will bounce back.”

The pairing at the top of the lineup started the season with a subpar result, and the team of senior Matthew Jones and sophomore Josh Robinson lost in their doubles match, 6-4. With a 12-5 record during the previous campaign, Robinson and Jones entered the season with lofty expectations to set the tone for the doubles lineup this year, but they struggled during the fall exhibitions.

The one bright spot in the doubles lineup came in the form of a win for the young pairing of sophomore Eitan Khromchenko and freshman Trey Fourticq. Khromchenko finished his first year with a stellar singles record but lacked the doubles record to match. With Fourticq now in the squad, Adams has high hopes for the #2 doubles team for this season and beyond.

“They work well together,” Adams said. “They get along, they communicate very well together on the court which is key in doubles.”

Junior Alex Kim needed a tiebreak in the second set to take down his opponent in straight sets at the #5 spot. Having struggled at the top of the lineup last season, Kim has rediscovered the success from his freshman season deeper in the team.

With Kim now playing at a different position, Adams tasked Robinson with the role of the #1 singles player in the team’s opening match. Despite pushing his opponent to seven games in two sets, Robinson fell in straight sets in his first-ever match at the #1. Adams remained encouraged following the match.

“Could not be more proud of Josh,” Adams said of Robinson. “It was a tough ask. He had a great year at #2 last year. He performed very well mentally and in the match. Overall, I was extremely pleased with his composure and willingness to compete.”

Khromchenko dropped his singles match in three sets, which pushed the Wildcats to the brink of defeat. Down three points to two, Villanova needed two consecutive singles victories to secure the win. Fourticq battled to a debut win at the #2 spot, weathering a tough second set to even the contest at three points. Sophomore Ryan Nguyen cruised by the #6 opponent to move the Wildcats to 1-0 on the season.

With one match played, the ‘Cats now have some evidence with which to evaluate the team’s status. In preparation for the next match, Villanova must look to build upon its performance against Jefferson. One key focus for the team will be locking down the doubles point in future matches.

“It’s going to be shoring up execution in doubles,” Adams said of the team’s focus heading into next week. “We’re putting ourselves in a great position to win a lot of points. It’s executing the closing shot.”

The Wildcats return to the court Friday, Feb. 11 to face Delaware in their second match of the season.