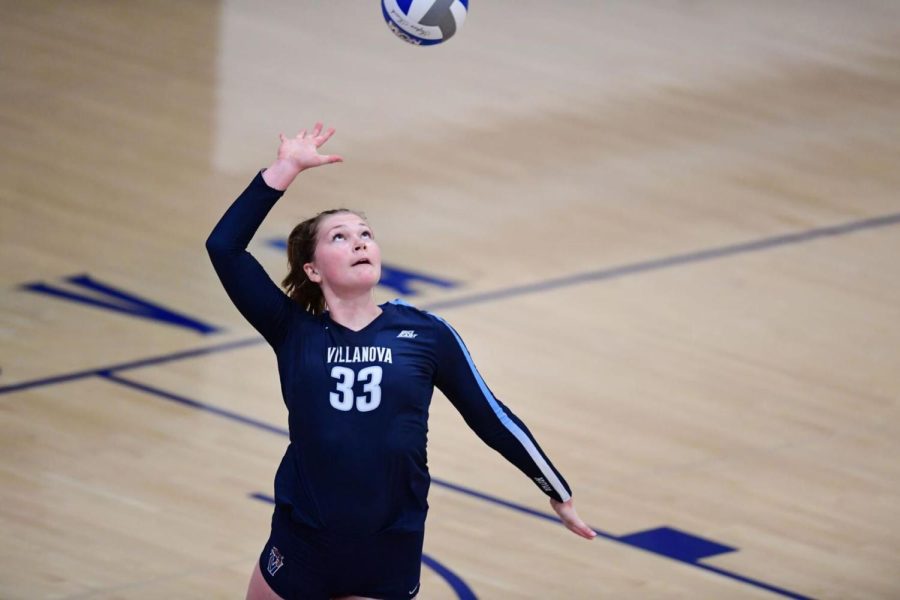 After having its fall season cancelled, women’s volleyball began the abbreviated spring season on Feb 11. With the series against St. Joe’s being postponed, the team has only had the chance to play two matches in the last two weeks.

The ‘Cats kicked off their season with a road match against Coppin State, winning 3-2. Villanova started out strong, winning the first set 25-16, but struggled in the next two sets, losing 25-18 and 25-23.  The Wildcats regrouped and put on a strong performance in the last two sets to close out the match.

The first set was an-all around team effort, with kills coming from four different Wildcats, and strong serving from junior Clare Delaplane. Behind a Delaplane serving ace, the Wildcats took a 15-5 lead. Coppin State was able to cut the lead to 19-12, but the ‘Cats closed out the set with a string of kills from Delaplane, Sophia Howling, Maddie Barber and Mallory Potts.

The ‘Cats could not keep the momentum going into the second set, falling to an early 11-5 deficit, after tying the game 4-4. A strong effort from Kathleen Johnson sparked a 3-0 run for Villanova, but Coppin State was able to finish the set 25-18.

Delaplane and Howling both stood out for the Wildcats in the third set. The ‘Cats fought hard in this set and had the serve down 24-23, but a long rally on match point ended with an attack error for Villanova, giving Coppin State the set.

The fourth set showed the power of Villanova’s hitting with kills coming from every angle. Setter Belle Morgan was able to set up Delaplane, Howling and Barber for multiple kills each, propelling the Wildcats to a 25-19 victory in the set, tying the score at 2-2.

The Wildcats held a 8-5 lead in the fifth set, but the Eagles would not go out without a fight. The ‘Cats had the serve up 14-13, and a match-winning kill by Delaplane, assisted by Morgan, clinched the victory for the Wildcats.

Junior outside hitter Delaplane tied a team high 14 kills. Other notable performances include 13 kills from Howling and five from Johnson.

Barber, getting the start in her debut match as a Wildcat, tied Delaplane with a team high 14 kills, along with a 0.571 attack percentage. This strong performance earned her the title of Big East Freshman of the week.

Between the two matches, Barber averaged 1.88 kills per set for Villanova. In the loss to Pittsburgh, Barber had one kill, two blocks, and two digs. Barber, a freshman from Cedarburg, Wisconsin, has gotten off to a strong start in her time with the Wildcats. Standing at 6’2”, the middle blocker will be an important piece for head coach Josh Steinbach.

Coming off the tough victory against Coppin State, Villanova hosted the No. 19 ranked Pittsburgh in its home-opener on Feb. 14.

The Panthers proved to be a challenge for the ‘Cats and triumphed 3-0.

Pitt came out hot in the first set, winning 25-6, tallying 15 kills on 24 attempts, for a hitting percentage of 0.625. Despite the strong efforts from Delaplane and Howling in this set, the power from the Panthers was too much for the Wildcats to combat.

The ‘Cats had a better showing in the second set, with kills from Potts and freshman Kiera Booth, along with service aces from Morgan and Schieder. The Panthers jumped to an early lead of 15-7, but Villanova chipped away and trailed 16-13, before Pitt took over, scoring nine of the last 11 points.

The Wildcats had an early lead in the third set, leading 10-8 behind two kills from Booth. Pitt scored five straight points to reclaim the lead 13-10. Kills from Potts and Howling made it a two-point game at 19-17, but the Panthers were able to score six of the last eight points and close out the match.