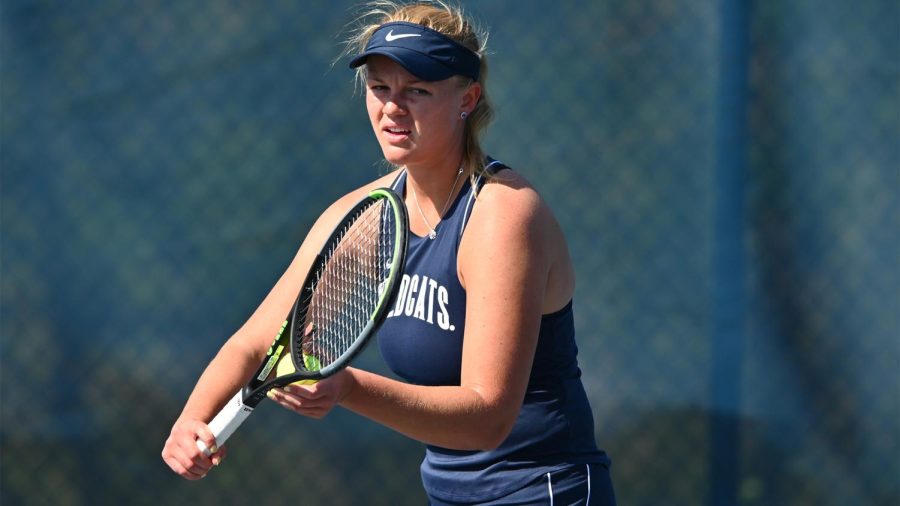 The Naval Academy Mids sunk the Villanova women’s tennis team in the Wildcats’ second match of the spring season. The ‘Cats grabbed a sole point in the 6-1 loss moving them to 0-2 early in the season. Navy provided a staunch challenge for the Wildcats, with the Mids moving to 4-0 on the season after the match.

“It was better than our first match,” Coach Steve Reiniger said of the performance. “That’s important. The team played better. Navy is a tough team.”

The doubles points, for the second straight match, were swept by the opponent. At the top spot, the senior duo of Annalise Klopfer and Emily Strande lost by a 6-2 margin, as did the #3 team of Olivia Kapp and Bella Steffen. Emma Brogan and Sabina Grigorian came closer in a 6-4 loss for the senior-freshman combination.

“It was a better showing in doubles,” Reiniger said. “Going forward, we’re not definitely set on the doubles combinations. I’ll probably look at that in the next week or so leading into [our match against] Delaware.”

The early struggles for the doubles teams reflect remnants of uncertainty from the fall season. Reiniger experimented with numerous lineups during the exhibitions, and the third doubles spot seemed ambiguous throughout much of the preseason. Klopfer and Strande, as the only senior partnership, need to be the standard-bearers for the doubles performances for the team. Reiniger will look to his leaders in upcoming matches to right the ship in the doubles points.

Despite the doubles woes, Klopfer came away from the match with a dominant straight-set victory over Jillian Taggart to secure Villanova’s one point from the day. A Navy transfer and former Mids team MVP, Klopfer and her early success may be key points in the winning formula for Villanova going forward.

One thing Reiniger stressed about operating in a non-scholarship program among fully backed Big East giants was the importance of strengthening the top end of the lineup. A lack of scholarships can deter some top players, yet Klopfer fell for the Villanova program, providing the ‘Cats with the high-end strength needed to compete throughout the year. Her 2-0 start at the #1 singles position indicates an early momentum that could signal future success.

Strande fell to 0-2 in singles from the #2 position in a straight-set loss to Kacey Moore. Despite the early struggles, Strande has never ended a season with a losing record. Brogan finished the day with the same season-to-date record. As the highest-ranking freshman on the team, Brogan deserves more match experience before inducing negative judgments, as her team-best 5-1 record in the exhibitions remains as evidence against her current two-match slate.

Junior Caitlin Fisher fell just short in a three-set battle with Samantha Johns at the #4 position. The 10-7 margin in the third set illustrates the narrow margins for the junior as Fisher works to rediscover herself from two years ago, when she ran through her competition during her freshman campaign en route to a 15-1 overall record. Her hot start slowed during the sophomore season, where she could muster just three wins in a pandemic-altered season. In her third year, with a win and a narrow loss to her name, Fisher’s prospects for the future seem tentatively bright.

Steffen has cemented herself at the fifth spot in the singles lineup but has yet to find her feet in the new season. A 6-3 record during the previous season evokes both positivity and a small sample size for the sophomore. A close loss in her first match against Bucknell inspires confidence despite the result at Navy.

Junior Amanda Rivera-Gonzalez lost in three sets at the #6 position by a 10-5 score in the third. After not playing during the previous season, the junior lacks significant match play, despite her age. But, a win in the first match combined with a tight loss signifies an emerging solidity at the tail end of the singles lineup.

Looking ahead, the Wildcats have a slight break before their next match. During the period, the main point of emphasis will be on getting the right doubles teams sorted.

“First focus is to take a look at the doubles combinations and to make sure that the right combinations are there,” Reiniger said of his team’s goals for the following week. “The goal is to get the team prepared for both singles and doubles, and the first priority would be to look at doubles.”

The Wildcats will look to bounce back in their next match against the University of Delaware on Friday, Feb. 11 at noon.