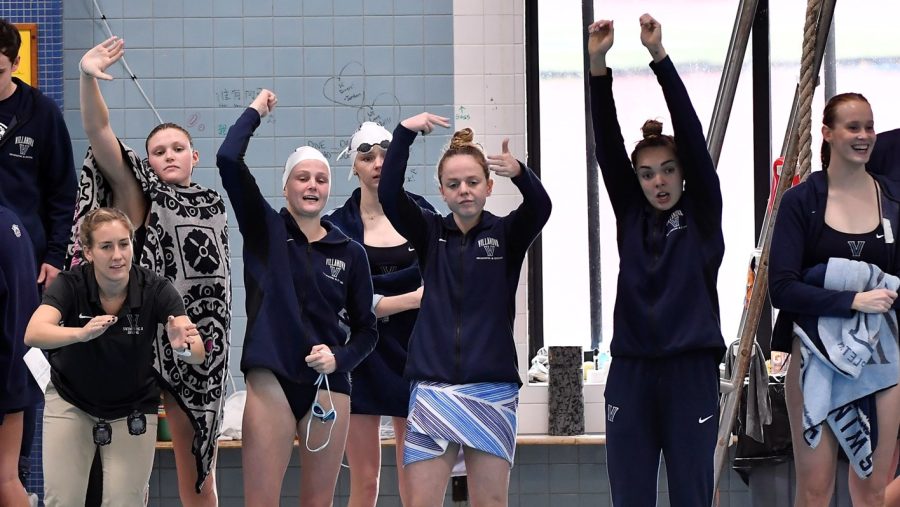 The women's swim and dive team celebrates during their weekend win.

Villanova women’s swimming started off 2022 well. The women upheld their strong reputation with a win over Richmond, 161-120, followed by a 133-108 victory over Rutgers.

In the first win, which was in Villanova’s home turf, the Wildcats won 12 of the 16 events, and were dominant over their opponents from early on.

The 200-yard medley relay proved to be a pivotal moment in the Wildcats’ overall success. Along with Montesi, junior Perri Stahl, graduate Elizabeth Bailey, and senior Abbey Berloco completed the relay with a time of 1:45.56, just 0.8 seconds ahead of Richmond’s second place team. This win set a precedent for the remainder of the events, as the Wildcats went on to win the next five events. This winning spree set a true gap between Villanova and Richmond, one which Richmond was unable to make up.

Graduate Milly Routledge showed true perseverance in the 200-yard free, finishing a mere 0.04 seconds earlier than Richmond’s senior swimmer Margaret Purcell. Furthermore, junior Kaitline Gravell and Stahl ended the 100-yard breaststroke in a remarkably close one-two finish. Stahl only surpassed Gravell by a miniscule 0.3 seconds, finishing with a time of 1:06.12, versus Gravell’s 1:06.42. Continuing said one-two streak, Bailey and sophomore Molly Benson showed a comparable finish in the 200-yard fly as Bailey finished in first with a time of 2:05.46, and Benson was second with a time of 2:08.28.

Montesi truly dominated the 100-yard back with a time of 55.61, but her teammates held up close behind. Villanova had three of the top-four times in the event, with great work from senior Grace Wieler and sophomore Audrey Pastorek.

Villanova and Richmond split the days’ two diving events, with Villanova taking home the 1-meter with a score of 239.02 by senior Andrea Holtz.

The team traveled to Rutgers on January 17. In the win over the Scarlet Knights, Montesi and Routledge each won both of their individual swims, in addition to their relay with Berloco and Wielar.

This brought the squad to an impressive 5-1 record and also brought an individual win to Welch, who placed first in the 1000-yard free with a time of 10:25.09 and the 500-yard free with a time of 5:04.79. Later in the meet, Gravell and Stahl brought together a one-two finish in the 200-yard breast, with Gravell finishing in 2:20.81 and Stahl in 2:23.18. Furthermore, Gravell, Pastorek and Berloco accomplished a mighty feat with all three of them landing inside the top-three in their events.

Although the Wildcats couldn’t quite reach a win in the 200-yard free, Berloco and Benson followed in close pursuit at second and third place. The Wildcats stood out in the 500-yard free, where all Villanova swimmers participating found a spot in the top four: Welch (5:04.79), junior Brenna McLaughlin (5:12.68) and freshman Francesca Raimondi (5:16.33).

Overall, the team won eight of the 13 events, including four one-two finishes, to seal the win over Rutgers.

After a weekend apart, the men’s and women’s teams will reunite on Jan. 20 as they travel to the University of Pittsburgh for the first dual meet of 2022.