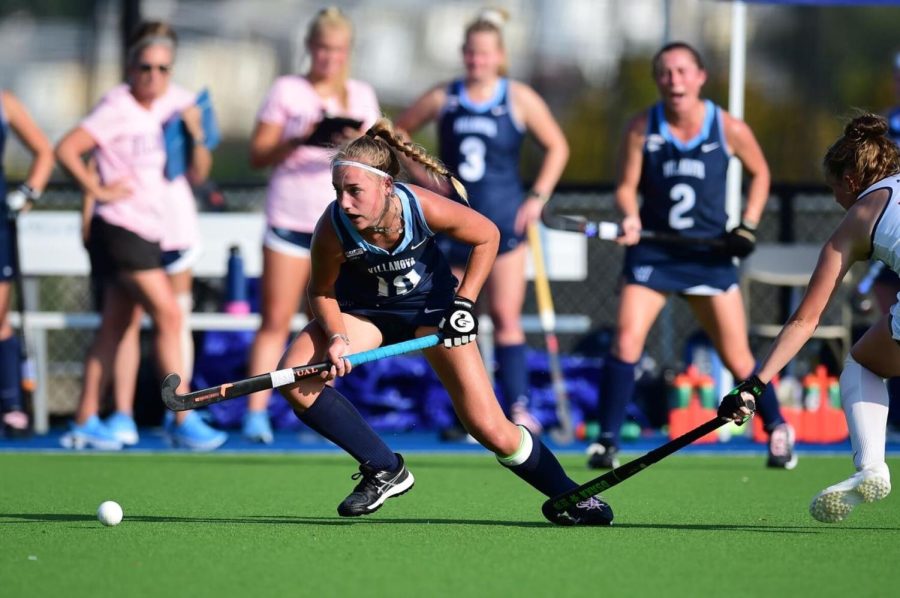 Freshman midfielder Anne Drabbe had two shots in the second half, although both were saved.

The Villanova field hockey team fell in its final game of the season to Georgetown, 2-1, on Friday. The Wildcats finish with a 6-12 overall record, 1-6 in Big East play.

Head coach Joanie Milhous had high expectations for her team leading into the matchup in the nation’s capital.

The ‘Cats had a strong offensive effort right away, with early shots by junior forward Caitlin Van Goeverden and sophomore forward Meghan Mitchell. Neither shot could find the goal, leaving both teams scoreless in the first period.

Freshman midfielder Anne Drabbe got in on the action by recording two shots on goal in the second period, both saved by the Hoya keeper. Mitchell took another shot but was unable to get it past the defense.

‘Nova and Georgetown went into half scoreless.

The Hoyas wasted no time coming out of halftime. A Georgetown attacker was able to get a shot past senior goalkeeper Jordan McGinley just a minute into the second half of play to put the Hoyas up 1-0.

Mitchell continued to put pressure on Georgetown goalkeeper Ciara Weets, but Weets held strong. The score remained 1-0 leading into the final 15 minutes of the game.

With six minutes remaining in the game, Georgetown scored on a penalty stroke to extend its lead to 2-0.

Mitchell scored with about four minutes to play to cut the Georgetown lead to 2-1.

However, ‘Nova was unable to make up the last goal in the remaining moments, dropping its season finale and ending a disappointing season.

“The season hasn’t gone the way I had expected it to go in regards to win loss which is a little frustrating,” Milhous said. “We know we have a lot of talent but we are not showing that on a consistent basis.”

Also putting up 10 goals this season, sophomore back Sabine de Ruijter was crucial for ‘Nova, as she started every game and led the team in minutes. She returns for two more years alongside Mitchell.

The Wildcats finished seventh in the Big East standings, edging out Quinnipiac in a tiebreaker for last place.