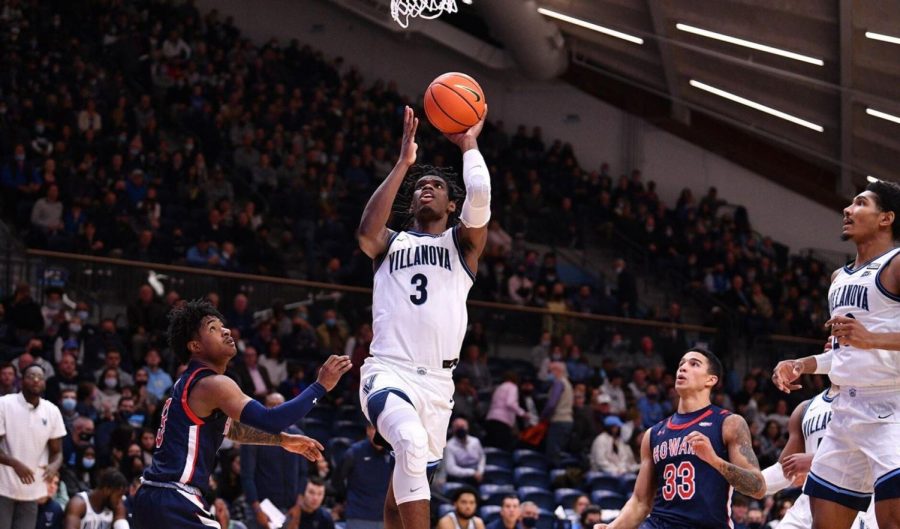 The Villanova Wildcats returned from a trip to the West Coast to take on the Howard Bison at the Finneran Pavilion, improving to 2-1 on the young season with a 100-81 victory.

“I hope they’re a really good team, because they looked like it to me, and we couldn’t guard them,” head coach Jay Wright said. “Thank God we could score.”

The Wildcats were led by senior forward Brandon Slater and graduate student guard Collin Gillespie. Slater led the way with a career high 23 points on 6-8 shooting and 4-4 from deep, to go with three rebounds and two assists.

“It’s not surprising. We work all summer … we practice everything. We practice form shooting, we practice free throws,” Slater said of his hot start to the season.

Gillespie scored 21 points on 6-13 shooting including 5-12 from three point range, in addition to two rebounds and three assists.

Both teams performed well offensively, but the Wildcats made two more threes and got to the line more. Both squads finished the game shooting 30-53 (56.6%) from the field. The Bison made 12 three pointers, while Villanova made 14 on 30 attempts (46.7%).

Junior guard Justin Moore and graduate forward Jermaine Samuels were the two other Wildcats to score in double digits.

5’11” freshman guard Elijah Hawkins started the scoring with a three-pointer for Howard, and Moore answered with one of his own for the Wildcats to set the tone for a shootout.

The first half was an offensive clinic on both sides, but not so much on the defensive end. After the first 20 minutes of play, the Wildcats held a 52-44 lead, despite the Bison only missing six field goals.

“I didn’t think we were that bad defensively, we were there on a lot of the threes,” Wright said. “They just stuck them, and they hit some tough twos.”

A similar trend continued in the second half, with Slater scoring the first five points, before an answer from redshirt sophomore forward Steve Settle put the Wildcat lead at 59-48.

The Bison closed the lead to single digits again at 62-54 with a three pointer from graduate student guard Tai Bibbs, but Villanova made a run from there to separate.

A 19-6 run that started with 15:36 left in the game and ended with 8:22 to go gave Villanova a 81-60 advantage to seal the game. Three pointers from fifth year seniors Gillespie and Samuels ended the run that put the game out of reach.

For Howard, Foster led the way with 19 points on 7-12 shooting and 5-9 from deep. Bibbs and Hawkins also finished with 16 points with three three pointers for Hawkins and two for Bibbs.

Villanova is back in action Saturday at 1 p.m. in the Hall of Fame Classic at the Mohegan Sun Arena in Uncasville, Connecticut against 17th ranked Tennessee. Depending on the result, the Wildcats will then take on either 6th ranked Purdue or 18th ranked North Carolina. Either way, it’s two more guaranteed games against ranked opponents.

“Every game is going to prepare us,” Slater said. “We get experience from every game … our next game is our most important game.”