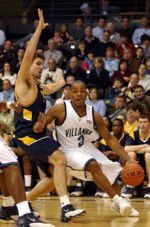 In the ‘Cats second straight home game against a ranked opponent, they found themselves on the wrong end of a 100-74 blowout.

Providence was too tough from the outside, hitting a record 15 three-pointers and were lead by Ryan Gomes, Donnie McGrath and Sheiku Kabba, who scored 23, 23 and 20 points, respectively.

The tone of the game was set early when the Friars opened with a 10-0 run, as ‘Nova turned the ball over on its first five possessions.

“Turning the ball over the first five possessions of the game without even a shot in a game like that, against a team that good, puts you in a hole,” head coach Jay Wright said.

“I think they got into such a rhythm early off of our turnovers, that there the kind of team when they shoot it like that they spread you out and you have to play from behind.”

The ‘Cats who have been nagged by turnovers all season, had 20 against the Friars.

A main cause for the turnovers was the Friars defensive zone they played. The Friars stayed in a 2-1-2 defense that caused problems for the ‘Cats getting shots from the outside and caused most of the turnovers.

The key turning point in the game was at the 11:15 mark of the second half. After a ‘Nova run brought the ‘Cats within 12, the chance to get back in the game seemed to slip out of their reach. On a loose ball, ‘Nova’s Will Sheridan and Providence’s Kabba dove to the ground for the ball, a questionable foul was called on Sheridan, after ‘Nova had come up with the ball. Then, McGrath was fouled by Randy Foye shooting a three and proceeded to knock down all three free-throws. Wright followed with a techinal foul, his first of the year and after Gomes hit both free-throws, Rob Sanders hit a three-pointer and pushed the lead to 20, 72-52.

“I just wanted to make a statement to our guys that we were not giving up and we’re going to be battling,” Wright said about the technical foul. “I wanted to show our guys that I was appreciating they were playing hard.”

The ‘Cats were once again led by Curtis Sumpter who scored 20 points and grabbed nine boards.

The game also featured some high water marks, however all the records were in Providence favor. The 100 points was the second time ever that an opposing team had broken the century mark in the Pavilion. The last was La Salle who scored 102 in a win over ‘Nova in 1990.

The 15 three-pointers were the most for the Friars in their history and the six three’s by McGrath was the most by him.

At the 2:13 mark of the second half, with the score 94-66, the band started a rousing rendition of the “Rocky” theme song. However, the ‘Cats were no Rocky tonight, but more like an Apollo Creed and the Friars were the Russian boxer Drago.

Villanova will be on the road this weekend when they travel to West Virginia. In an earlier match-up this season the ‘Cats were victorious, winning 73-58.