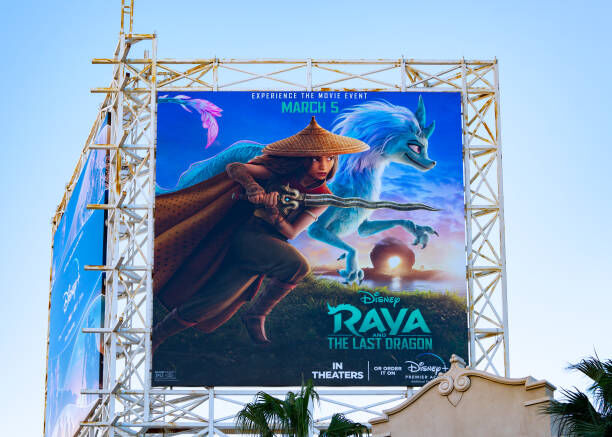 Walt Disney Pictures' 'Raya and the Last Dragon' will be shown in theaters and on Disney+ on March 5.

Last Wednesday, Feb. 24, Walt Disney animators and co-directors Paul Briggs and John Ripa  hosted a Zoom event for university students, as they unpacked the newest Disney movie, “Raya and the Last Dragon,” speaking on the Southeast Asian cultural context of the flim and the production process.

Briggs and Ripa began by introducing themselves. Briggs began his Disney career over 25 years ago through an animation internship. The first movie he worked on was “Mulan,” and he held the position of Head of Story on huge blockbusters including “Frozen” and “Big Hero 6.” Ripa began his Disney work with the 1994 “Lion King” and continued to work on “Meet the Robinsons,” “Frozen,” “Zootopia” and others.

The directors showed a preview of the film that airs in theatres and for purchase on Disney+ on March 5. The preview provided a glimpse into the film with aspects of hardship, humor, adventure and love. The movie is set in a world divided into five broken parts, all connected by the Dragon River. Raya sets out to unite the land and joins with others along the way to overcome betrayal and conflict.

Briggs and Ripa concluded the preview and told viewers about some of the underlying questions for the film’s audience.

“The big question we posed was, can the characters trust each other enough to unite a divided world,” Briggs said.

“How do you find trust when the world around you feels so broken,” Ripa added. “We want things to only be problematic in our fantasy land, but we see parallels in our world.”

Briggs and Ripa then focussed on the cultural inspiration for the film, which was Southeast Asian culture.

Each person working on the film also traveled to multiple Southeast Asias countries to gain an understanding of the culture and the importance of its representation in film. The crew had immersive visits to Cambodia, Vietnam, Malaysia and Singapore among other regions. These visits were all guided by local experts and consultants to give feedback on Disney’s ideas for the film.

Authentic aspects of the culture govern the context of the film through the entirety of the movie. Characters took off their shoes before entering a sacred place, they wore traditional sampots, they wrapped their pants rather than buttoning them and food was central to community and trust.

The co-directors then transitioned to speak about the production process. Due to the COVID-19 pandemic, the crew worked on “Raya and the Last Dragon” at home for a large portion of time.

Izaac Wang, the 14-year-old who voices Boon in the film, recorded from his closet because the clothing trapped the sound and limited echoing. Ripa joked about some of the challenges they faced when working from home.

“Izaac’s closet had motion sensitive lighting, so we would be recording, and all of a sudden all the light would all go off,” Ripa said. “He had to start waving his arms in the air to turn them back on.”

Over 450 artists worked on the animations for “Raya and the Last Dragon,” and Briggs mentioned how visually difficult it was to make.

Kelly Marie Tran recorded the voice for Raya. In a video the co-directors showed about working from home, Tran commented on the chaos of the production.

“The movie has this wonderful message of figuring out how to work together and trust people for the better good,” Tran said. “And it’s been weird to have real life be a metaphor for that, as we have been working together but separately.”

Lastly, Ripa showed the storyboarding process involved in animation. He told students about his experience when he created his first Disney storyboard for “Rapunzel” before it became “Tangled.” Ripa struggled to make it perfect. Usually for Disney movies, storyboards take two weeks. He took two months for this scene.

“All of this about storyboarding is to bring up that animation is a process that requires discovery,” Ripa said. “It’s a lot of trial and error. Where you start and where you end up is never the same. By not being afraid and by making mistakes, that’s how you grow. Now is the time to push yourselves and challenge yourselves and challenge each other.”

“It’s all about choices,” Briggs said. “We are just making choices. We are gonna fail. I fail all the time. It is all about just taking that and moving forward.”