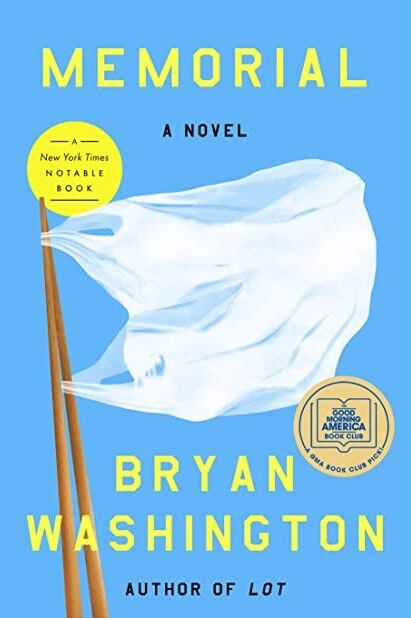 The cover of Washington's new release.

Author Bryan Washington graced the University this past Thursday to do a reading and Q&A with faculty and students. Writer of a New York Times notable book, named one of Time’s Books of the Year and recipient of rave reviews from names like “O, The Oprah Magazine” and Vogue, Washington is exceedingly gifted.

The event came after the release of Washington’s newest book, “Memorial.” The novel follows the story of two men, Benson and Mike, who have been dating for five years. The book explores their relationship dynamic and the struggles that arise when Mike hears about his estranged father’s imminent death in Japan. Mike flies there to say goodbye, leaving Benson with his visiting mother. The book is not only a testament to love but is a dive into concepts like LGBTQ+ struggles and ultimately self-discovery.

The novel was bought by the entertainment company A24 even before its release in Oct. 2020. Posting on A24’s website on Dec. 21, Washington discussed his ambitions and feelings about the novel becoming a limited series.

“We are well into the process of writing, as far as creating the architecture of the series and an architecture that is of the book, but one that is autonomous, simultaneously,” Washington said.

He was insistent on being part of the writing team for the adaptation.

“And what’s been a joy for me is having this world that I get to spend a little bit more time in, and…what needs to be altered to fit this form,” he said.

“Memorial” is Washington’s first novel. Previously, he focused his work on writing fictional essays for magazines and newspapers like Bon Appétit, The New Yorker and The New York Times. In 2019, Washington released a collection of fictional short stories titled “Lot Stories” about the intimate lives of those living in different Houston neighborhoods. That set of stories did extremely well, as former President Barack Obama named it one of his top books of 2019.

The event itself started with Washington reading a 30-minute excerpt from the novel. It was one of the first few scenes of the book in which the listeners got a sense of the tensions between the two main characters, building up the plot to come. The language was often vulgar, raw and attention-grabbing.

Afterwards, the session was opened up for a Q&A. With such an illustrious writer present, Villanova students and faculty asked many questions about the novel itself and Washington’s writing processes.

In particular, one member asked about Washington’s utilization of humor in his writing, as the book is noted for all its quick wit and banter between characters.

The young writers in the room were attune to every one of his tips, hoping that each one would steer them towards a writing career as successful as Washington’s has been. Being only 28-years-old, his advice was taken even more seriously, as young writers are aware of the difficulty of breaking into the business so young.

Washington also discussed the process of learning about his characters by listening to them. He reads aloud to not put himself too much into the fictional people he creates and to reveal the power of occasionally having a character speak without saying anything at all.

Washington has clear empathy expressed in the stories he writes, which is something he made clear by the apparent reverence he gave to the writing process and to the stories themselves.

Although writing novels is “quite a lot of drafting and quite a lot of revising,” as Washington put it, he still commits himself to the process for his stories’ ultimate purpose.

In fact, when asked about the transition from short stories to a complete novel, Washington relayed that it was not too difficult, as all he had to do was listen to what the story was telling him.

This event was part of the English Department’s Annual Literary Festival. Taking place each spring, the department invites a series of poets and fiction writers to meet with students. Washington’s session was the second event of four.