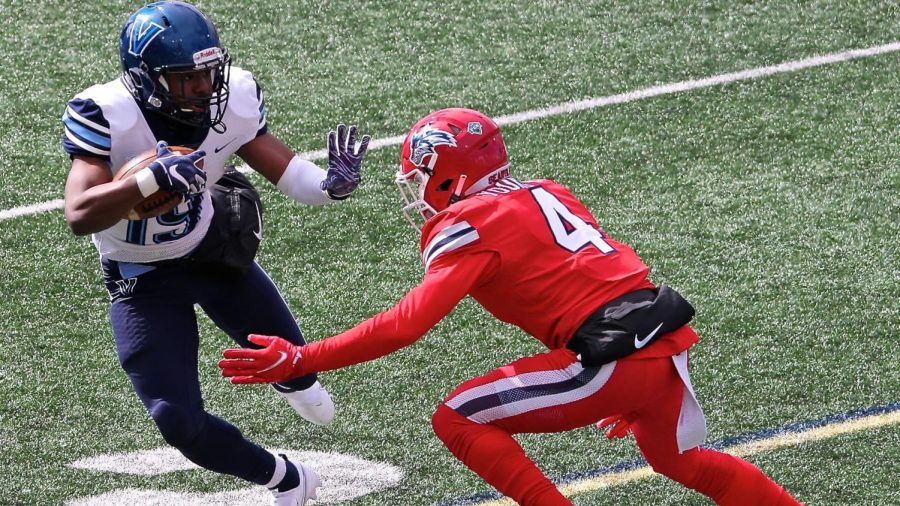 The Villanova Wildcats started their spring season off right with a 16-13 win over the Stony Brook Seawolves, the first test in their six-game schedule.

Junior running back Jalen Johnson scored from one yard out on the first drive of the game, putting Villanova up 6-0 following a missed PAT. The Wildcats then recovered a fumble on the ensuing kickoff, but despite taking over in Stony Brook territory, they could not score. A missed field goal gave the Seawolves the ball for the first time in the game. Despite letting up a drive into their own territory, the Villanova defense tightened up in the endzone, with Christian Benford intercepting Tyquell Fields at the seven yard line.

The Wildcats would score once more in the 2nd quarter, with a 49-yard pass from Daniel Smith to Rayjoun Pringle capping off a 78-yard, 6-play drive. The touchdown, the first of Pringle’s career, gave the Wildcats a 13-0 lead which they took into the locker room at the half. The Seawolves would respond with a third quarter 62-yard drive culminating in a 6-yard scramble for a touchdown by Tyquell Fields. The score would narrow the Wildcats’ lead to 13-7.

A Cole Bunce 38-yard field goal would extend the Villanova lead to 16-7 in the fourth quarter, but the Seawolves did not give up. Stony Brook blocked a short-field punt to give them the ball in the red zone. Three plays later, Jayden Cook punched the ball in from six yards out to make the score 16-13.

The Villanova special teams unit, which struggled all day, stepped up when it mattered most by recovering the Stony Brook onside kick following the touchdown. The Wildcats then ran out the clock and secured their first victory of the season.

Nowoola Awopetu led the Wildcats defense with 6 total tackles, 4 of them solo tackles. He also recorded half a sack and a tackle for loss. Along with the interception, Christian Benford also recorded 3 solo tackles and defended 2 passes.

The Wildcats will look to carry their momentum in their next matchup against Rhode Island at Villanova Stadium. The game will kick off at 1:00 pm this Saturday.