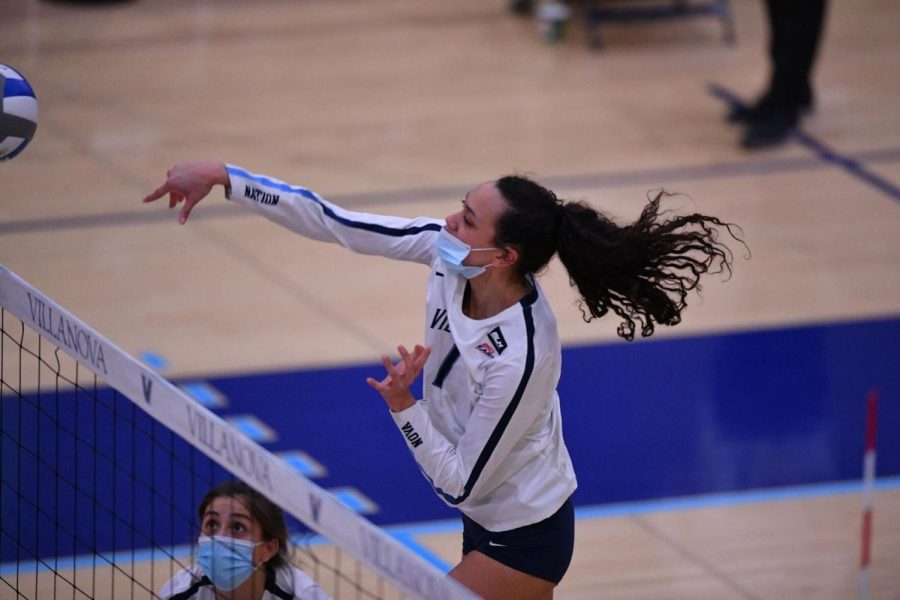 The Wildcats had 75 kills in Friday's win over Seton Hall.

In Friday’s matchup, Villanova was able to get started fast. Redshirt junior Sophia Howling led Villanova with 19 kills and a .452 hit percentage. Clare Delaplane had a career high 21 digs and tied Howling with 19 kills. Riley Homer added 16 kills and 11 digs. Belle Morgan led the team with 50 assists, and Averi Salvador led with 26 digs and six aces.

The excitement started early, as the first point went over the net fourteen times before Seton Hall won on a Villanova error. But Villanova was able to come back and win the set, 25-18. The second set was  interesting as well, as Seton Hall battled to erase an early 6-2 deficit, which it did and eventually won the set, 26-24. Both teams had over a .400 hit percentage in the second set, but the Pirates barely edged Villanova in a defensive-heavy set. The Cats took care of business in the third set thanks to six kills from Howling. The fourth set was one of the most exciting Villanova has had in years. The Cats started down 7-1, and eventually were losing 20-12, but the team was able to fight back and eventually tie at 27. Villanova would take its first lead at 28-27, but Seton Hall won the next three points to win, 30-28. The last set was also constantly moving back and forth before Villanova won off an attacking error by Seton Hall.

Saturday’s matchup wasn’t as close and exciting as the first. The closest set was the fourth, but it did go to five sets, which was expected after the previous night. Riley Homer led the team in kills with 16, and Howling added 14 to that, as well as three blocks. Andrea Campos and Morgan combined for 50 assists. Deleplane struggled offensively but led the team in digs with 16.

In the first set, Villanova took an early lead and was able to close out the set, with help from 10 assists by Morgan. In the second set, Campos had eight assists to go with Homer’s five kills, but Seton Hall pulled away early and never looked back, winning 25-19. In the third set, Villanova had an impressive .469 hitting percentage and took a 7-1 run to the end of the set to go up 2-1. The fourth set was a back-and-forth affair. Villanova got off to a fast 12-3 lead and looked prime to win the match, but Seton Hall won 10 straight points to take the lead, 15-13. Unfortunately, the Cats couldn’t come back and fell 25-23 in the set. In the final set, it was all Seton Hall from the beginning, and it would end up winning big to take the match.

The 4-3 Wildcats will face St. John’s next. Villanova had two games with St. John’s postponed earlier in the season and just beat them two weeks ago, 3-1. St John’s is leading the East division in the Big East, going 5-2 in conference. Villanova is second in the East, going 3-2 in conference, so this is a big matchup that could have major implications later in the season.