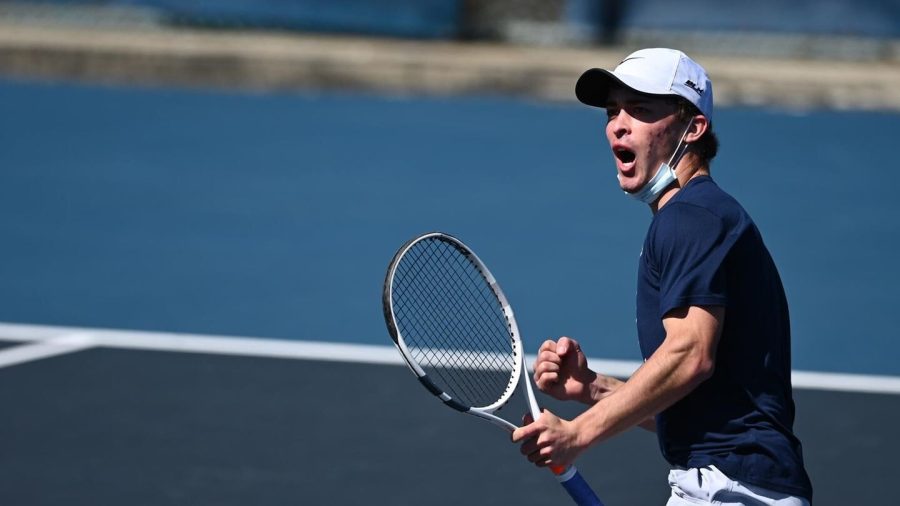 The Wildcats defeated the Explorers courtesy of a thrilling comeback.

The Villanova men’s tennis team secured its fifth win of the season with a 4-3 comeback victory over La Salle. The team fought back from being down 3-0, securing the final four singles matches to move to 5-5 on the season.

La Salle earned the doubles point by winning two of the three doubles matches to open the contest. Wildcat sophomores Alex Kim and Justin Suarez lost to the veteran La Salle pairing of Rogelio Gonzalez and Connor Merrill. The two have struggled at the top of the doubles lineup, often forced into competitions against more seasoned players. With only one win on the season, Kim and Suarez are still finding their footing as the leading duo.

Junior Matt Jones and freshman Anthony Robinson claimed the consolation doubles set, further cementing their status as the most reliable doubles team for Brad Adams and this Wildcat squad. The partnership moved to 6-2 in doubles, the mix of youth and experience combining well throughout the season and becoming one of the most dangerous doubles teams for the ‘Cats.

Freshmen Eitan Khromchenko and Noah Winton partnered for the first time this season, losing their doubles set in the third position. The first-time matchup underlies Adam’s indecision with the doubles lineup throughout the season.

While the singles rank has remained consistent over the past couple of matches, Villanova continues to try different combinations for the three doubles teams, in search of a perfect fit. The Winton-Khromchenko experiment became the sixth doubles team this season with two or fewer matches played. Jones and Robinson have found a permanent spot in the lineup, while Adams has not budged from ranking Kim and Suarez at the top. However, that final team has varied throughout the year. Khromchenko and freshman Anthony Prokurat provide a valuable albeit young option to round out the lineup, and Winton has often played alongside sophomore Daniel Cheng. Consistency in the doubles rankings could prove beneficial to the Wildcats as they face a fluctuating schedule prone to cancelations.

Kim lost his second match of the day with a straight-set defeat at the number one  singles position. Adams has thrust the North Carolina native into the path of many of the country’s top tennis players, and the sophomore still faces a period of adjustment as the leader of the team. Kim managed more games in this meeting with the Explorers than in the two teams’ previous matchup, an improvement along the margins reflecting growth among defeats.

Khromchenko dropped his number three singles match in straight sets, his defeat a precursor for the ‘Cats incredible comeback. Khromchenko’s result comes as a surprise, as his stellar singles record and performance against La Salle two weeks ago have established the freshman as one of the best singles players on this young Villanova squad.

Two other freshmen at the bottom of the lineup secured wins of their own, as Prokurat and Ryan Nguyen helped to inspire a comeback from the number five and number six positions. Prokurat joined Khromchenko with five singles successes on the year as Nguyen moved to 4-2. Greater experience and match time for the two freshmen predicated the success they enjoyed against the Explorers, evidence that a steady selection of players is vital for such a young team.

Cheng secured the Wildcats’ third point of the day with his win at the number four position, a promising victory for a player lacking an excellent singles record to date. Tied at three points, Robinson took home the deciding match in a three-set battle at the number two position. After winning a tight first set, Robinson dropped the second set in a tiebreak by the thinnest of margins. The freshman rallied in the third set, finding an unmatchable rhythm in the decider which proved the difference in the game and the match as a whole.

This win adds further support to the foundation of a team trotting out mostly freshmen every week. After facing a gauntlet of four matches in five days only a week ago, the team needed to recover from a 1-3 record over the stretch. Now, with its second consecutive successful outing, the team approaches a clash with cross-town rivals Drexel with a third win in mind.

The Villanova men’s tennis team returns to Philadelphia to face off against the Dragons on Wednesday, March 31 at 1 p.m.