The Red Carpet Looks of the 2021 Golden Globes 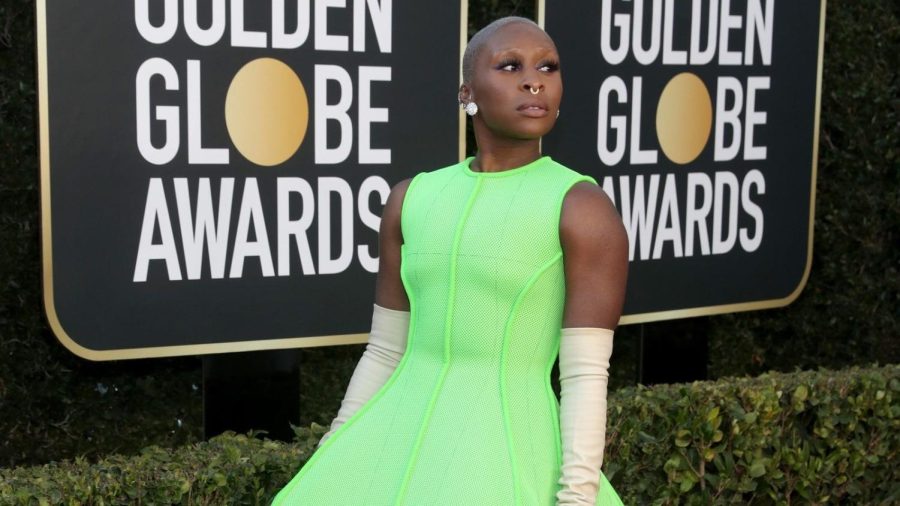 Cynthia Erivo glowed in her neon green gown for the Golden Globe Awards.

This year’s Golden Globes Awards was unlike any other. In a normal year, countless celebrities would walk the red carpet showing off their designer gowns and suits, hoping to leave the greatest impression. This year, however, many celebrities attended from their living rooms. Even with this new acceptability of wearing sweatpants beneath the camera, many did, however, choose to showcase their most glamorous apparel. The only difference was they did so from the comfort of their own homes.

Using social media as a means of showing off their glamor, celebrities did not disappoint in bringing looks to viewers.

Celebrities that Zoomed into the event were the ones that had the most bold and colorful attire, contrasting the majority of those that did walk the red carpet who played it somewhat safe.

Some of these more subdued looks were worn by the host, Tina Fey and Amy Poehler, who both wore simple long-sleeved black dresses.

Amy Poehler’s dress was a tuxedo-style paired with tights and Brian Atwood pumps.

Another was Renée Zellweger who was seen wearing an Armani Prive sweetheart neckline dress, with classic black Jimmy Choo pumps.

Margot Robbie sported a black Chanel belted dress with a high-leg slit, and a Chanel purse to accompany it.

One of the only exceptions to the seemingly simple fashion rule for red carpet goers was Cynthia Erivo who stole the show in a striking neon green Valentino gown with silver platform wedges.

The many celebrities who attended the event at home showed up with fashion that expressed their personal flare. One, Carey Mulligan, admitted that although she was still confined at home, this event gave her a reason to dress up like she has not been able to this past year. Mulligan admits that the Golden Globes was the first time she had worn heels in the past eight months.

Those on Zoom got glammed up to show face on camera and post to social media, and ended up being some of the best dressed of the night. Actress Viola Davis Zoomed in wearing a bold gown with vibrant colors made by Claude Lavie Kameni. The dress’s fabric was derived from popular fabric in her home country, Cameroon.

Known for her role on Bridgerton, Nicola Coughlan, stayed true to her style on the show by wearing a gorgeous pastel yellow gown with a wide skirt.

Bringing back looks from the roaring twenties, Julia Garner pulled off an ultra low-cut Prada dress with a black sequined midline.

Star of The Queen’s Gambit, Taylor-Joy, posted in an eye-catching Dior dress in her signature color, emerald green. The dress also had a low-cut neckline and she finished the look with a matching robe.

Perhaps the best outfit of the night, however, was worn by Jason Sudeikis. Zooming in wearing a tie-dye sweatshirt, Sudeikis truly represented how we have all been dressing for the past year, and encouraged loungewear as a virtual fashion statement.

Although this year’s Golden Globe Awards were not conventional, the celebrities that participated definitely did not disappoint in terms of their fashion choices. This year’s Golden Globes showed how to make the best out of our current Covid situations and how to utilize every opportunity to dress to impress.