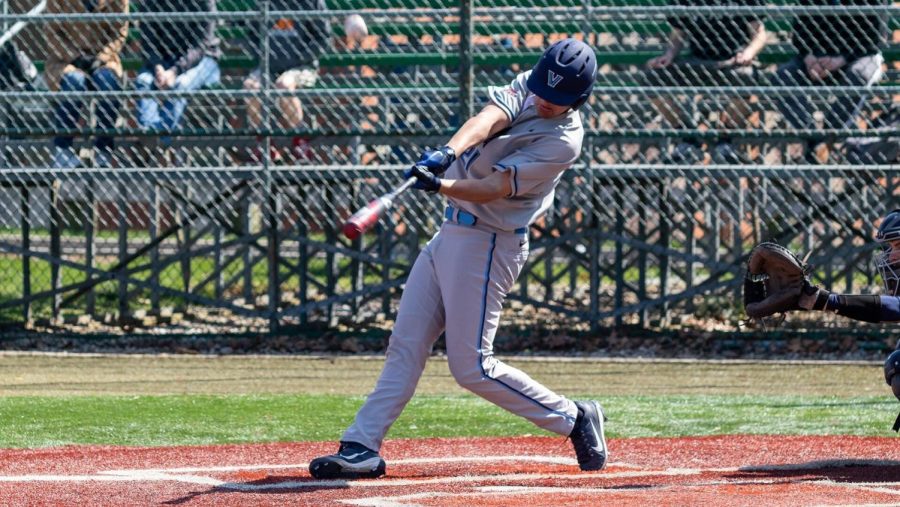 Game one of the series took place at Stony Brook, with starting pitcher graduate student Tyler Arella on the mound for ‘Nova.

The first five innings of the game were scoreless, with the ‘Cats only getting a single runner in scoring position. However, in the top of the sixth, the ‘Cats broke the scoreless tie.

Sophomore AJ Hansen opened up the frame with a walk and advanced to second on a walk. The next batter, senior Chris Rotondo, hit a single, advancing Hansen to third. Freshman Cameron Hassert then took the plate and delivered a sacrifice bunt, advancing Rotondo to second and scoring Hansen.

Later in the inning, with Rotondo on second and one out, graduate student Ryan Toohers hit a triple, scoring Rotondo and giving the ‘Cats a 2-0 lead.

In the bottom of the seventh, with sophomore Brandon Siegenthaler on the mound, Stony Brook got on the board with a one run single, cutting ‘Nova’s lead to 2-1.

With the score still 2-1, the ‘Cats brought in their closer, sophomore Danny Wilkinson, in the bottom of the ninth. The first batter of the inning for Stony Brook reached on an error, and then with one out, John Tuccillo reached on a catcher’s interference.

A pass ball advanced both runners, giving Stoney Brook runners on second and third with two outs. Evan Fox walked, bringing Johnny Decker to the plate with the winning run in scoring position and two outs.

Decker flew out to right field, and the ‘Cats hung on to win 2-1.

Toohers had two hits, one walk and one RBI, and Arella pitched six scoreless innings, striking out 10 on the way to his first win of the season.

At home in game two, the ‘Cats got on the board early, with Hassert grounding out to first, which scored Rotondo, who led off the game with a triple.

In the top of the third, Stony Brook responded. With starting pitcher senior Jimmy Kingsburg on the mound, Stony Brook scored two runs on two different singles, giving them a 2-1 lead.

That lead would not last long for Stony Brook. In the bottom of the third, Hansen tripled and Rotondo brought him home with a single, making it a 2-2 game.

Rotondo later stole second and advanced to third on a sacrifice fly by Hassert and was brought home with a two out, one run triple by sophomore Jack O’Reilly. The next batter, Toohers, hit a one run single, which scored O’Reilly and gave the ‘Cats a 4-2 lead.

In the bottom of the sixth inning, the ‘Cats got some insurance runs, with Hassert hitting a bases-loaded single, scoring senior Sam Margulis from second and senior Pat O’Neill from third.

In the bottom of the seventh, the ‘Cats tacked on two more runs with a bases loaded single from Margulis, scoring O’Neill from second and sophomore Lucas Latrenta from third.

With senior Cameron Mathes on the mound in the top of the eighth, Stony Brook scored on a one run single, making it an 8-3 ball game. That score went on to be the final as the ‘Cats got the series sweep over Stony Brook.

Toohers had two hits and one RBI, and Kingsbury pitched six innings, giving up two runs while striking out four.

Villanova had 12 hits (one double and three triples), drew five walks and struck out eight batters.

This week, the ‘Cats face their first Big East opponent of the season as they go up against Creighton on the road in a four game series. Game one is on Friday, a doubleheader on Saturday and the finale is on Sunday.