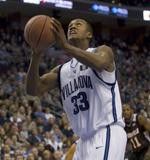 According to Coach Jay Wright in a press conference on Saturday afternoon, the Wildcats would’ve been OK even if they didn’t end up beating Louisville. Even though the game was viewed by many as a must-win for a team that has started conference play with a 3-5 mark, Villanova made sure they wouldn’t have to worry about dealing with the ramifications of a loss as they went on to defeat the Cardinals 57-53 at the Wachovia Center.

Wright admitted that the Wildcats didn’t play one of their better games of the year, but still sounded satisfied with his team’s overall effort.

The first half wasn’t an offensive showcase by any means, with both teams struggling from the field. Villanova jumped out to a 15-5 lead, thanks to a hot start by Mike Nardi. However, when Nardi sat down after picking up two fouls in the first half, the offense stalled in a big way. The result was 12 consecutive missed field goal attempts in the latter part of the first half. Louisville, meanwhile, shot a dismal 21.4 percent from field, making just six of their field goal attempts in the first half. Despite this, Villanova’s inability to score and eight first-half turnovers kept Louisville’s deficit to just two points at the half.

The Wildcats picked up their offensive pace in a big way after the break, hitting key shots when they needed them, giving Villanova the lead permanently. Shane Clark got a friendly “home-court roll” on a three-pointer from the top of the key to put Villanova up 39-37 halfway through the second half. After that, opportune three-pointers by Curtis Sumpter, Reggie Redding and Scottie Reynolds kept the Cardinals at bay. Forward Dante Cunningham enlivened the Wachovia Center crowd with an alley-oop off of an inbounds feed from behind the basket with just one second remaining on the shot clock. The Wildcats ended up overcoming 16 turnovers by shooting 50 percent from the field in the second half. The team also hit most of its free throws down the stretch to seal the victory.

“We had an opportunity to win the game and, at the wrong times, gave up the three-ball,” Louisville Coach Rick Pitino said. “Both teams were very physical and they [Villanova] deserve the credit. We’re very disappointed, to say the least, in the loss.”

Clark led Villanova with 12 points, including hitting all three shots he took from beyond the arc. Nardi added 11 points on 5-of-10 shooting from the field. Sumpter, back in the starting lineup after coming off the bench in recent games because of injuries, was the third Wildcat in double figures with 10 points. He also pulled down six rebounds. Scottie Reynolds, despite having an off-shooting night, going just 2-for-11, added nine points and a career-high 10 assists. Redding, who played a season-high 30 minutes while subbing in for Nardi and Dante Cunningham due to foul trouble, finished with seven points and six rebounds.

Louisville, though improving its second-half shooting to 48 percent, still finished shooting just 35 percent for the game. Earl Clark scored 14 points off the bench to pace the Cardinals. But the Wildcats stifled some of Louisville’s best players, limiting center David Padgett to four points, forward Juan Palacios to six, and guards Edgar Sosa and Brandon Jenkins to five and four points, respectively.